Brazil Faces a Choice Between the U.S. and China

I recently returned from two weeks of talks and research in Brazil. I visited with power brokers and everyday people in São Paulo, Porto Alegre, Rio and Brazil’s capital, Brasília. I returned home with an on-the-ground perspective of what’s really happening in the country.

The highlight of my trip was my meeting with former Finance Minister Luiz Bresser-Pereira at his São Paulo home to discuss his theory of “New Developmentalism.”

It goes: If emerging countries rely more on local capital flows than foreign speculation, they will be more stable economically.

In Porto Alegre, I participated in an anti-impeachment, pro-democracy rally. I also spoke with all kinds of people about the declining economy. Public university professors who used to get paid monthly told me that they now get nine small checks a month because the city has no funds. Not only do average consumers see a declining economy in theory — they feel it.

In Rio, I learned the city is struggling to pay hospital and sanitation workers. Not a good pre-Olympics condition. And I had drinks with an artist who is a single mom of a 9-year-old daughter. She told me, “It really doesn’t matter who runs the government. They are all corrupt, and we will all still be struggling.”

In Brasília, I navigated the 1960s “planned” city. Each ministry occupies its own identical, rectangular, equidistant building. All of the buildings together dot a wide road feeding into the Power Trio of the National Congress, the president’s office and the Supreme Federal Court. It’s like The Fountainhead meets Stanley Kubrick, Clockwork Orange years. Nothing’s ornate, just functionally sturdy and streamlined — the way the future once felt to the past, stuck in time. 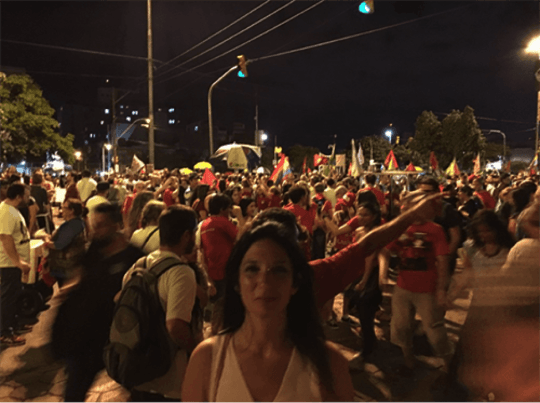 With a huge and diverse crowd at anti-impeachment demonstrations in Porto Alegre.

On my third day in balmy Brasília, I lunched with six economists from the World Bank office. We discussed Dilma’s impeachment probability. Over espressos and the best flan ever, I asked who thinks Dilma will be impeached? Who doesn’t? The result was three-to-three.

In the end, Brazilians know their government is corrupt. They differ on which party is worse. Few have strong opinions about what should be done to strengthen the economy after this political crisis, which will stoke street anxiety.

Few of the people I talked to, or much of the press, seemed to realize that something bigger and more secretive is at stake.

Lurking in the shadows of political drama are the brewing power wars of the elites of the U.S. and the West versus China for the economic soul of Brazil.

Below, I show you where that battle stands right now. I also show you how the Federal Reserve’s quantitative easing programs helped fuel Brazil’s speculative boom — which has now gone bust.

Over the past decade and a half China and Latin America have grown much closer.

Chinese-Brazilian trade alone rose from $6.5 billion in 2003 to $83.3 billion in 2012. As of 2014, China was the top import/export partner with Brazil, closely followed by the United States and Argentina.

About 95% of those loans from Chinese government banks to Latin America went to Argentina, Brazil, Ecuador and Venezuela. U.S. banks might be lending to corporations with cheap money, but the Chinese are settling in for the long haul.

Naturally, the United States is alarmed. After all, Latin America has been the “backyard” of the U.S. since the days of the Monroe Doctrine. The American government does not relish the prospect of seeing the continent’s resources shipped off to Asia.

So it wouldn’t be surprising to learn they want Dilma out — especially since her government has been doing all sorts of deals with China.

In February, Brazilian senators met with a Chinese delegation to discuss the proposed bilateral agreement to build the 40 billion real ($10 billion) Bi-Oceanic railroad between Brazil and Peru. The Chinese delegation included the chairman of Hsin Chong Construction Group, Lin Zhouyan.

The railroad would provide more efficient routes for key products like iron, soybeans, oil, chickens and lithium to be exported to China.

The South Port and Railway East-West Integration (Bi-Oceanic railroad) was set to be built, operated and financed by the Chinese Fund for Investment in Latin America and China Railway Engineering Group. The investment was to be made in conjunction with the Bahia state government and Bahia Mining Co. That’s the second-most-important state governed by the Workers’ Party, headed by Dilma.

Their stake could be imperiled if she’s impeached. The new government would likely backtrack or nullify the arrangements they’ve made. It would mean a loss of jobs, but it might also help the country gain favor with the United States. In fact, some banks and businesses want Dilma out for precisely that reason, as I learned meeting with João Barroso, senior adviser of Brazil’s central bank (BCB) to its board of governors.

Barroso and I discussed the impact of the Federal Reserve’s quantitative easing (QE) on capital inflows. According to his analysis, over 54% of capital inflows from the U.S. to Brazil have been caused directly by QE. Essentially, QE pushed U.S. speculators into Brazil. Most of it has gone into Brazil’s bond market, which makes sense since rates there are much higher than in the rest of Latin America.

Up to 65% of total U.S. portfolio flows to major Latin American countries was caused by the Fed’s QE. But as Barroso noted, “Even though these flows are small relative to the overall $4.5 trillion Fed balance sheet expansion in the U.S., they are considerably large relative to the recipient economies.”

In other Latin American countries, U.S. capital flowed into equity markets. Speculative capital, funded near zero thanks to the Fed, craves higher returns. When Brazil showed less political and economic risk, it stuck around. As in the U.S., it wasn’t interested in long-term infrastructure projects but in short-term returns.

Brazil’s benchmark rate now stands at 14.25%, its highest level since 2006. While other emerging-market central banks loosened monetary policy as per U.S. Fed directives, Brazil and Russia tightened. This was due to domestic concerns, like high inflation, and to attract foreign capital.

As commodity prices fell, corruption scandals rose and the government started infighting so that capital got nervous and left Brazil. Barroso thinks that once the political chaos clears, the BCB might embark on a path of “convergence” in rates, and they could drop.

Barroso considers coordinating global economy and local policy hard. Beyond the big four (U.S., Europe, Japan, China), “It’s a game theory problem — everybody does their best for their country individually yet must balance the gains of coordination.”

The QE-related effect from the U.S. on Brazil was also due to proximity and good old-fashioned opportunism. The U.S. drives more capital flow globally. But that capital can retract on currency devaluation, as we’ve seen until the recent anti-Dilma relief rally. The China-Brazil relationship, on the other hand, centers less on speculative capital flow and more on trade and strategic longer-term project partnerships.

In Brazil, political crisis is currently overwhelming Fed-stimulated cheap money flows and weak fundamentals. The added problem of leverage, or taking on too much private debt during good times and not thinking of consequences of unwinding, looms. As Brazil’s corporates took on more foreign debt, they were also subsidized by the government that borrowed at 14.25 and lent at 2%. (This credit leverage is much bigger in China.)

“Fragile economies are more affected by risk aversion caused by any factor. Brazil has a lot of fragility. Once it gets stable, the currency will appreciate.” Barroso also said there could be a convergence of Brazil’s rates to the U.S. “if politics calms down.”

Private businesses and banks in Brazil want Dilma out so they can have less competition from state-owned, or favored, companies. Wall Street wants her out because if Vice President Temer privatizes anything, large fees to big foreign banks would result. The area would be riper for Western bank infiltration.

I expect that near-term political chaos will prevail in Brazil, whether due to the impeachment or what happens afterward. The lower house committee voted on April 11 to recommend Dilma’s impeachment by 38–27. The full lower house vote on April 17 of 367 to 137 (seven abstentions, two no-shows) confirmed this. Now the vote goes to the Senate on May 11 or 12. In anti-Dilma moments, the market and currency have risen, and in pro-Dilma ones, fallen.

But at some point, reality about the economy will set in. It doesn’t matter who is president, and Brazil’s markets will go south.

Expectations of any government to solve its problems immediately will be met with harsh realities of exiting companies, budget crunches, declining growth, growing downgrades and defaults and angry citizens. In the backdrop, the power and trade wars between shorter-term-minded Western and longer-term-minded Eastern banks and corporations will escalate.

The unfolding question is this: Does Brazil “bet” on China, now that China (and the political leaders that sided with it) is struggling? Or will Brazil switch sides and re-embrace the U.S. in offering cheap manufacturing after its currency has devalued?

I will pay attention to Chinese resource demands relative to the demand that the U.S. has for manufactured exports and financing inflows in the case of a new government during the next six months.