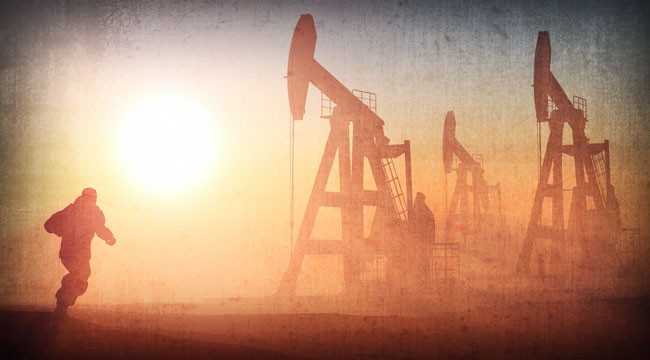 My Boots Don’t Believe In This “Bubble” Talk

The “Bubble” folks keep coming out of the woodwork!

Today I’m back to set the record straight America’s oil and gas industry. I’ve muddied my boots in the oil patch for an up close look at what’s happening around the country. With the price of oil still pressured under $50/barrel the naysayers are out in full force.

Today we’re going to do some good old bubble-bashing.

The bubble folks are crying wolf on a shale industry that’s got a lot more meat to it than they’d like to admit.

They say we’re headed for bankruptcies and defaults.  I say they’re wrong.

For instance, in yesterday’s edition of the DR, Addison posted a table from ZeroHedge. The table highlighted 68 companies that had exceptionally high debt to earnings ratios. Sounds like an old fashioned list of companies ready to implode!

However, If you’re looking for a table that thwarts America’s shale boom and proves that our domestic production was nothing more than a debt-fueled sham….this, my friend, is NOT it.

Out of the 68 companies highlighted almost all of them are infrastructure plays, normally noted by the “L.P.” for limited partnership. These companies are NOT shale drillers. Instead, they’re pipeline plays, midstream plays, refiners and processors.

Most of the companies on that list have a higher debt to earnings ratio because they’re in the process of building out much-needed infrastructure.

Just think about it. We never expected to have oil flowing from South of San Antonio TX, Williston ND, Denver CO – or natural gas flowing from Pittsburgh PA.

But less than 10 years ago, with the advent of new technology, America’s oil and gas pioneers unlocked a massive bounty of energy.  A century’s worth of natural gas and enough crude oil nearly double domestic production.

This kind of real wealth boom needs infrastructure. Gathering systems to transport oil and gas from the well-head. Storage tanks to hold crude oil. Processing facilities to break down “raw” natural gas into useable commodities like butane, propane, ethane and dry natural gas. Pipelines to take oil from the outskirts of America to major refineries and cities. And specialized processing for the newfound light sweet crude oil.

Here’s a stickier example (because I’ve got a picture from the Roughrider State.) Below you’ll see Enbridge storage facilities in Williston, ND. 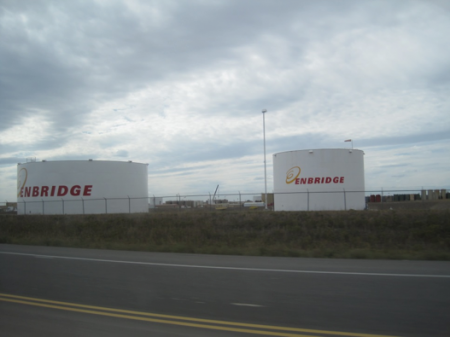 With little pipeline infrastructure in Williston, ND, storage facilities like this are necessary to store the massive amounts of crude coming out of the ground.

Enbridge is part of that list of 68, #39 to be exact, with a “4.7x” total debt to earnings ratio. The company raised debt to but storage facilities, pipelines, processing, etc.  But is this a black plague of debt? Or a natural progression for a budding industry?

Looking ahead, Enbridge will get decades of use out of these storage facilities, pipelines and facilities. That’s what the debt is paying for – not willy-nilly shale drilling. This isn’t smoke and mirrors. Or as my friend and colleague Byron King would say, “no vaporware here!”

The storage tanks above and the rest of America’s oil and gas infrastructure build-out are the perfect case against the folks crying wolf and positing a bubble in shale.

Now, that gets to the next important question:  “But Matt, if oil companies can’t make money with low oil prices, won’t America’s shale patch dry up?… Thus, there won’t be a need for these storage tanks?”

Hey, good question! We’re finally getting to the important part of this discussion.

Indeed, the economics of America’s shale patch have changed. Companies that thought they could sell their oil for $85-100/barrel instead are getting closer to $50. That’s rough.

The drop in cash flow will have a profound effect on American shale plays. Like I’ve said before, if Apple Inc. had to sell its beloved (and ungodly expensive) iPads at cost, you can bet Apple’s business would take a hit.

Indeed, America’s oil and gas industry is taking its licks. But at $50/barrel – and likely higher in 2015 – the industry won’t collapse. Well-run producers in shale sweetspots are going to continue to produce oil for decades. America’s oil boom is much more economic than the naysayers would have you believe.

P.S. If you were a subscriber to the Daily Reckoning’s email addition, you would’ve received unique content on this ongoing argument. You would’ve even been able to weigh in by sending us your questions or comments. Signing up is easy and free. Simply click here and we’ll start writing to you tomorrow.