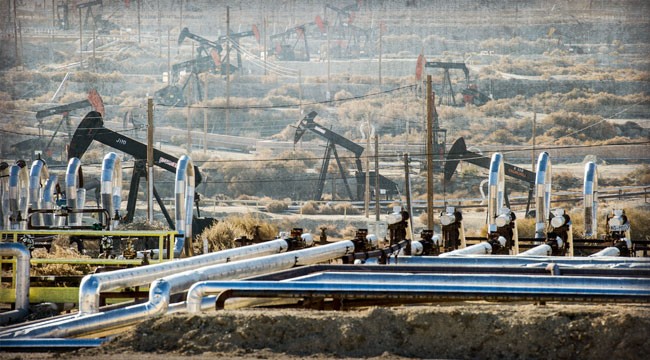 America's Shale Boom is Not Dead

America’s shale boom is not dead.

Knowing that simple fact — and bucking the mainstream media oil bash — is our ticket to a few extreme bargains. In fact, you’ll have the opportunity to profit from the U.S. oil production for multiple decades. Below I’ll give you two of my favorite oil plays, too.

First up on the docket: let’s do a little evangelizing…

Folks are comparing today’s U.S. oil market to a run of the mill Ponzi scheme, shell game or bond bubble.  But when you crunch the numbers, all of those fear-mongering terms don’t make sense in the context of today’s oil market.

But those derivatives aren’t a black plague set to take down the whole U.S. shale industry. Far from it, in fact.

You see, the key to a good “scheme” is that it’s built on false money flows and lies.

Today I’ll show you why we won’t see widespread, Ponzi-like collapse in the oil market.

Fact is, the U.S. has a lot of economic oil to go around. There’s no “great lie” found at the heart of America’s shale boom.  And many of the well-run players in this space will never get close to default — let alone spark a 2008-type meltdown.

Simply put, the mainstream media and the folks that joined the “we hate the shale boom” bandwagon, still have the story wrong.

America’s oil boom is real. Underneath domestic soil sits a massive supply of oil and gas – decades worth of supply. I’ve been to North Dakota’s oil rigs. I’ve seen the boom in South Texas, Pennsylvania, Oklahoma and Colorado…

The production is no flash in the pan either. 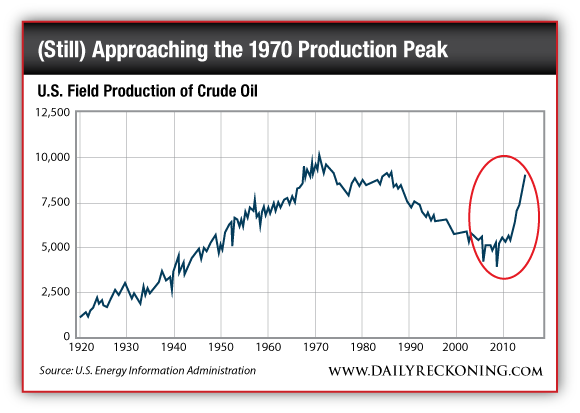 Over the past seven years the U.S. has increased oil production by nearly five million barrels per day. That increase in production is more than the total production from countries like Iran, Iraq, Brazil, Venezuela, etc…

It’s also enough (as you can see on the nearby chart) to almost eclipse America’s 1970 peak in oil production.

That, my friend, is no small feat.

The oil that’s flowing from the ground is real. So are the economics (today I’ll give you some numbers from the field.)

Simply put, don’t confuse a short-term downturn in the price of oil as the end of America’s shale boom, that’s simply not the case.

Remember, I’ve been following the industry for the past seven years – visiting drill sites, talking to CEOs and rig workers. So although I’m not the foremost expert in the field, I’ve been under the hood of America’s shale boom.

With those metrics in mind, here’s a look at some napkin math breakeven prices…

*This does not include operating costs, transport costs, overhead etc.*

The table above shows ballpark breakeven prices for U.S. shale plays. It’s based on estimates from my experience talking with drillers across the country.

Well costs range from $4 million to $8 million on average. And estimated ultimate recovery (EUR) ranges from 200,000 to 600,000. The calculations (shown in green) don’t include operating costs, transportation costs or overhead. So they’re not an “all in” cost by any means.

That said, we’re looking at cash-cost breakeven prices from America’s oil patch in the range of $6 to $40 a barrel (again, that’s my estimate for well-run producers that I’ve talked to in the field.)

“But Matt, aren’t those estimates?”

That’s true. It’s napkin math from the top of my head. But that’s why I did some digging to get you some real numbers…

One of the companies that I most recently visited is a Colorado shale player, Synergy Resources (SYRG.)

Here’s a look at some a real example, and some extrapolated estimates…

Part of the data above is from one of Synergy’s recent pad drilling sites.

In the first column you’ll see the average well’s initial production (IP) rate for 90 days. The company averaged 430 barrels per day over the first 90 days of the well — totaling 38,700 barrels of oil. So at just 90 days after the start of the well, with a $4 million price tag, you can see that the cash breakeven price is already close to $100 per barrel. And that’s just in the first 90 days.

The next column shows production if this well averages 300 barrels per day for the first year (a low estimate.) If that’s the case, we’re looking at a cash breakeven price of $36 per barrel. Just to be clear, this is my math, not the company’s.

And in the last column you’ll see the company’s estimated ultimate recovery of 325,000 barrels. At a $4 million well cost, that leaves the ultimate cash breakeven price at 12 bucks.

There are other examples, too.

In the first table above I capped the EUR at 600,000 barrels. But in some instances companies are reporting higher EURs than that.  Pioneer Natural Resources (PXD), for instance, has shown a handful of its wells on track to make anywhere from 650,000 to 1,000,000 barrels.

Again, I didn’t put 1,000,000 barrels per well in the table above because that’s likely on the high end of the scale. But it’s on the scale! Some U.S. oil wells, with $4-10 million cost, have the potential produce a million barrels of oil. That’s an eye-popping number.

If that doesn’t scream about the viable economics of America’s shale boom, I don’t know what will.

“But Matt, if the economics are so good, why are shares of shale producers getting hammered into the ground?”

That’s a great question. With a simple answer.

You see, Synergy Resources, Pioneer Natural Resources and other well-run shale players aren’t living in a vacuum. They spend a lot of money in the hopes to make a lot of money. And naturally the back end of that equation relates to the price of oil.

If oil is $50 instead of $100, you can count on cash flows for these companies getting hammered.

Think of it this way…

Imagine if Apple Inc. had to start selling their beloved (and ungodly expensive) iPads at cost. All of a sudden those cash-cow products would be breaking even instead of spinning cash. You can bet your bottom dollar that Apple’s stock would take a severe hit. It’s simple economics.

However, one thing should be very clear in your head. Just because the price of iPads drops doesn’t mean that Apple’s factories are a desert mirage. And that the whole iPad industry is a massive shell game.

But that’s what the naysayers in today’s oil market want you to think.

The naysayers coming out of the woodwork are wrong.

Although we’re going to see continued pressure on the oil industry with low oil prices, America’s shale boom is not dead.

And sure, some poorly-run companies, that bit off a little more than they can chew in America’s shale sector, are going to run aground. But that’s the case in any boom, and not cause for “financial meltdown” alarms to be ringing.

Point is, there’s a massive amount of sub-$50 oil here in America.

Right now the Saudis are trying to wage a price war for the price of oil. And it won’t end well for THEM. Although U.S. producers will cut their spending with oil at $50, drilling will continue. U.S. shale production won’t disappear.

When global oil prices rebound – and they will in 2015 – the economics will still work out in favor of U.S. producers.

Well-run U.S. oil companies will make it out alive (like the two I named above.) And while the blood is in the streets, now’s the time to pick them up on the cheap.

P.S. In our daily emails we’ve been debating the oil market’s outlook in 2015 for the past three days. Readers like you have been able to weigh in, too. You’re missing out on 50% of the analysis we publish when you only stick to our website. Click here and subscribe to receive our daily letter as well. You won’t regret it. (Did we mention it’s free?)