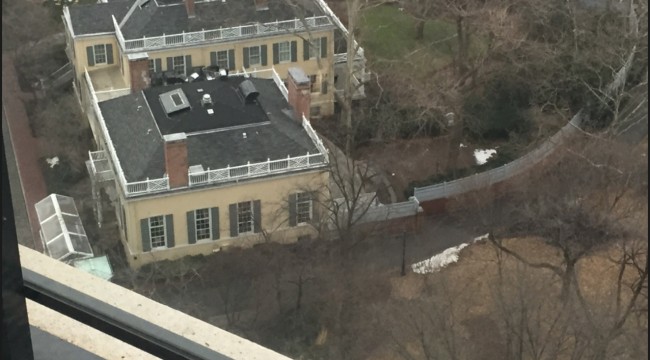 Boomers Are Being Led Like Lambs To The Slaughter

“Not a bad view. That’s the mayor’s house right beneath us.”

We were on the 16th floor of a new apartment building, looking out over the East River.

With us was President Reagan’s former budget advisor and Wall Street veteran David Stockman — a man who has been closer to the Bubble Epoch than almost anyone.

The Dow rose 183 points yesterday — or just over 1% — after starting the day in the red.

“I was there at the creation,” said David.

“After leaving government, I went to Salomon Brothers in the late 1980s. We were just starting to put together packages of mortgage-backed debt.”

Bubble finance has taken many shapes and sizes.

There was a penthouse apartment for sale on the Upper East Side for $60 million. Luxury digs on the West Side were going for $30 million… another for $16 million.

You don’t make that kind of money parking cars… or making them. So, if you want to buy one of these places, you almost have to work in finance.

Most people have no idea how the financial world works. They think investments go up or down and you make money depending on your luck or your skill — just like any other game.

They don’t know the game is rigged.

Central banks make credit available to the big banks at preferential rates. The banks then earn a fat “spread” by making loans to government, industry, and households.

They make money lending… and then, they make money again by packaging and selling the debt to investors, pension funds, and insurance companies.

Everything is fine until the credit cycle turns down. Then marginal debtors can’t pay and marginal (subprime or junk) debt loses value.

Stocks and real estate go down, too. Everybody loses money. And everyone wants the Fed to “do something.”

What can it do?

Bubble finance began under Greenspan in the late 1980s. Since then, it’s blown up three times. But each time, the central bankers were able to put it back together. And the bubble got even bigger.

But now they’ve used up all their powder. Interest rates are already at zero. And the Japanese, the Europeans, the Swedes, and the Swiss are all operating with NIRP — negative interest rate policy.

It is really a War on Savers.

They’re depriving savers of any return on their money. The typical return on savings is 0.2%. So, if you have saved up $250,000 over a lifetime of thrift, you can earn enough to buy one cappuccino a day.

And the poor retail investor is being led like a lamb to the slaughter… again. Baby Boomers are retiring at the rate of 10,000 a day. I don’t know what they’re going to do if another crash wipes them out.

Stockman was present at the creation of the whole Bubble Epoch. In 1981, President Reagan appointed him to be his first budget director. Four years later, he quit in disgust.

“Funny, isn’t it? I was alarmed by a national debt of $900 billion. Yesterday, it went over $19 trillion. And nobody cared.”

President Nixon made the Bubble Epoch possible by going off the gold standard in 1971.

No “golden anchor”: no limit on how much money and credit you could create.

But the Bubble Epoch didn’t really begin until 10 years later under “The Gipper.”

Stockman battled the big spenders in the Republican Party — and lost. After he was out of the way, Reagan ran some of the biggest deficits ever.

Soon, debt was out of control everywhere — in government, industry, and private consumption.

“We must be nearing the end of this,” said Stockman. “I expect the whole world economy to plunge into deflation and recession.”