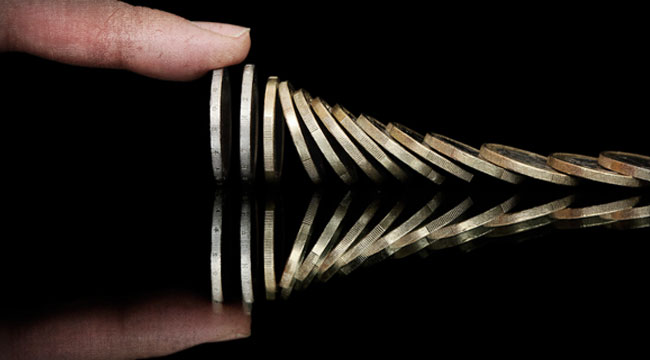 The Bond Vigilantes Will Stop Trumponomics

Their return also marks the end game of the drastic falsification of debt and other financial asset prices that has been carried out by the world’s central banks since the mid-1990s.

What has actually happened since then is that the bond “vigilantes” of yore morphed into central bank “front runners” in recent years. That is, bond traders, who used to sell government securities when they sensed fiscal profligacy, switched to the “buy” side of the market as the age of massive central bank balance sheet expansion and the associated bond-buying sprees under quantitative easing (QE) unfolded.

There was really no mystery about this — it was just the law of supply and demand at work. The central banks were relieving the markets of trillions of government debt, causing bond prices to rise and yields to fall steadily toward the zero bound.

In that context, it goes without saying that traders buy what’s going up and expected to go up even more. At the same time, the central banks left no doubt that they could be counted upon because of their announced commitment to massive monthly purchase quotas.

What this meant in practice is that the $20 trillion increase in central bank balance sheets during the last two decades was amplified by the former bond vigilantes who had morphed into “front-runners.”  After all, quota based central bank bond-buying is fundamentally different than the action of traders on a free market.

Indeed, central banks have the legal authority to commit what amounts to financial fraud day-in-and-day-out by funding their open market purchases of government bonds with credits confected from thin air. When these credits are injected into the banking system as valid payments to selling dealers, the price of government debt is falsely levitated higher and higher.

Total holdings of the world’s central banks were about $2 trillion in the mid-1990’s when the bond vigilantes were last heard from.

But beginning after 2000, the massive uptake in central bank balance sheets, and therefore artificial bid for government debt, converted them into “front-runners.” In that mode they pocketed literally hundreds of billions of windfall profits by buying government bonds on leverage and riding them to higher and higher prices.

Speculators simply bought the bond and funded it in the zero cost money market with virtually no risk, thereby causing the bond market to function as an afterburner on the central bank bid. Bond traders have never made so much for doing so little, meaning that massive amounts of speculative capital was attracted into the government debt markets on a wholly unnatural and unsustainable basis.

The irony of the current situation is well worth noting. The mother of all global bond bubbles has essentially been created by recycled bond vigilantes who got into the front-running business after Greenspan yelled “uncle” in 1994 when the marketplace rate of interest on the nation’s bulging public debt started to soar.

As I have noted before, had the lapsed gold-bug and free market economist Ronald Reagan thought he appointed to the Fed retained his principles and integrity, the age of massive government debts would have been stopped then and there. A painful economic recession would have made it clear that the 12-year Reagan/Bush deficit spree — which took the public debt from $1 trillion to $4 trillion — had not been a free lunch.

In fact, there was a price to pay in terms of far higher market-clearing interest rates. That, in turn, would have “crowded out” private investment in business capital and housing and precipitated a painful economic adjustment.

Instead, Greenspan elected to nullify the honest verdict of the free market bond vigilantes and embark on the age of massive central bank balance sheet expansion and bond-buying. That horrifically wrong turn on the monetary road, of course, did defer the day of reckoning because it essentially allowed governments to park their debts for nearly free on the balance sheets of the global central banks.

Indeed, when Greenspan euthanized the bond vigilantes in 1994, the balance sheet of the Fed was about $275 billion and footings for all the world’s major central banks combined was $2 trillion.

Greenspan’s handiwork triggered an explosion of dollar liabilities among the balance of the world central banks. Had they not worked to cheapen their own currencies in response to the tsunami of Greenspan dollars, their currencies would have soared, thereby undermining the statist and mercantilist policies which were already in place in their respective countries.

In any event, the bond vigilantes were buried by the central bank bond-buying explosion — only to re-emerge as central bank front-runners. They ended up capturing immense windfalls that had not even been imaginable during their days as honest disciplinarians of profligate governments and politicians.

There is probably no way to quantify the impact of this double whammy — central banks plus front-runners — on the bond bid, but it had to be immense. That’s because there is no other rationale for the fact that has recently as August, some $13 trillion of the $42 trillion in outstanding global sovereign debt was trading at sub-zero rates and most of the remainder was in the +/- 1% zone.

In short, the global bond market was being tortured by the most monumental one-way bid that has ever impacted any financial market in recorded history. The financial world was literally wobbling on its axis.

By a great stroke of historical coincidence, however, the Keynesian central bankers regime is being brought to an abrupt end—-and much sooner than otherwise — by the prospect of Trumponomics and its massive add-ons to Uncle Sam’s already towering debts. That’s because it is euthanizing the bond market front-runners in almost an exact reverse of the process Greenspan set in motion in 1994.

Donald Trump and his deficit-embracing economics team have caused the battle to create a false prosperity based on Keynesian money-pumping to be lost early.

Accordingly, the bond vigilantes will now coming roaring back. That’s because without the Big Fat Bid of the central banks, profits are to be made by selling the sinking bonds, not buying the rising paper.

The entire dynamic of the global bond market and financial system for the past two decades has been captured by the false bond price premiums being created by the massive central bank balance sheet expansion shown above.

But when that’s gone, the front-runners will pivot with the alacrity of Donald Trump himself.

In the midst of the fiscal bloodbath that is sure to follow, Trumponics is going to be ripped limb-for-limb, as it deserves to be. That a $1 trillion infrastructure program can help make America great again is just wrong-headed.

It can only fill the Washington swamp with more interest group boodle and racketeering, and saddle the U.S. economy with wasteful pork barrels and public sector white elephants — like high speed rail — that it can’t afford and doesn’t need.

This new reality will soon shatter the false post-election euphoria that has gripped the financial markets, and uncover the fiscal bloodbath that will confront the new Trump Administration when it attempts to pursue its economic program.

In a word, rising interest rates, rising deficits and rampaging bond vigilantes are returning to the Imperial City for the first time in 25 years. The result will be a budgetary conflagration like nothing since the Reagan battles of 1981.

But this time, Uncle Sam is dead broke and the central bank bond parking gambit is now over and done.