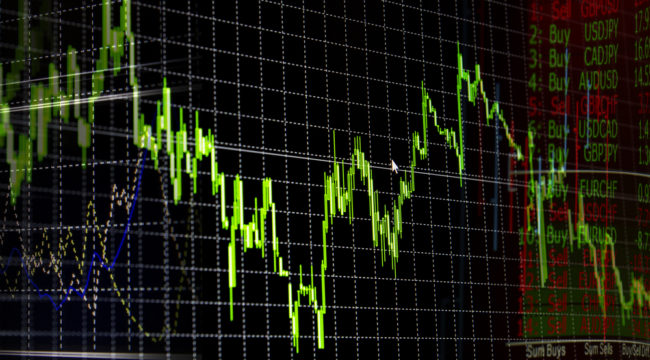 We hope Mr. Jerome Hayden Powell enjoyed his first day on the job…

For these past boozy years investors have “bought the dip” after every substantial sell-off.

Today… they did not.

They sold and sold — and sold some more.

Have markets lost their nerve… or have they recovered covered their senses?

More importantly, what in blue blazes started it all?

A sell-off in bonds is the consensus view.

A robust jobs report on Friday revealed wages are rising at their fastest rate in more than eight years.

Markets fear rising wages mean inflation could be emerging from its cage… and the Federal Reserve might raise rates with gusto to keep it in.

“The recent market decline,” Yahoo Finance confirms, “comes on the heels of a rise in Treasury yields that sent the benchmark 10-year yield to 2.85% last week, its highest level in four years.”

“You’ve had a sell-off in bonds, and it basically got to a point that it’s impacted the sentiment,” adds Nader Naeimi of AMP Capital Investors Ltd.

Yields on the bellwether 10-year Treasury rose to 2.86% this morning.

Rising rates makes it harder for debt-sogged businesses to service their debts.

Increased borrowing costs therefore threaten the economic recovery… such as it is.

Worries that rising bond yields signify stiffening resolve at the Fed against inflation underpin another bear case for equities: that higher finance costs will slow the economy. Buying a house gets more expensive, credit cards bite harder, consumer confidence takes a hit. All of that could result in a recession, which in the end is what most analysts say will kill the bull market.

As rates have risen recently… stocks have fallen.

We adduce the following evidence in proof thereof: 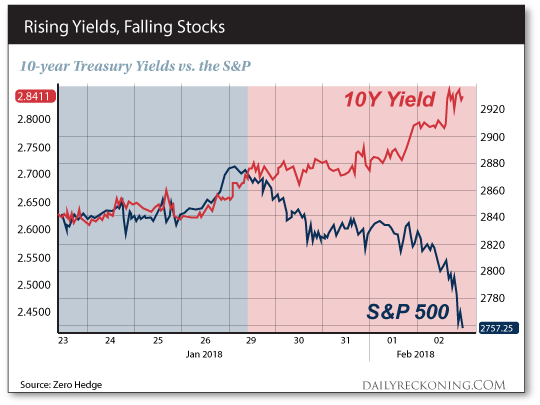 Many believe a 3% yield on the 10-year Treasury could be the proverbial straw to fracture the camel’s spine.

Regardless, 10-year rates are on a general northerly heading.

Analysts at the brokerage firm Stifel believe the 10-year yield will surmount 3% during the first quarter.

Capital Economics agrees rising rates will result in a slump over the second half of the year.

Roy Sebag, founder of Goldmoney, has brought the following chart to our attentions. 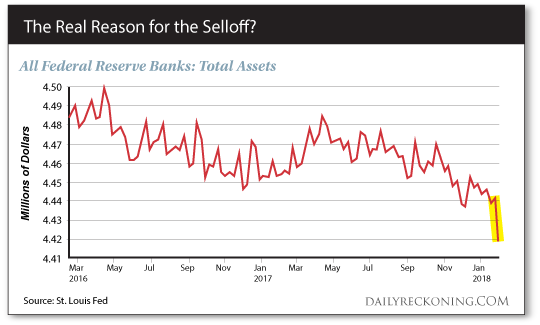 “The Fed sold just $22B of $4.4 Trillion “assets” it bought over the last 9 years. Its largest one week sale since this experiment began with QE1/TARP. Watching “paint dry” Yellen told us.”

Never has paint dried with such… dramatic effect.

Our Nomi Prins noted recently that the Fed’s balance sheet reductions prior to last week have amounted a “rounding error.”

Will this episode cause new Federal Reserve chairman Powell to suspend the planned balance sheet reductions?

“After the stumble this past week,” says analyst Lance Roberts, “it will be interesting to watch the Fed’s balance sheet over the next month to see if they continue with their planned $30 billion/month reduction.”

Mr. Powell is thus presented with this conundrum…

If he clings to the current balance sheet-reducing course he risks a market collapse and/or recession.

If he suspends reductions he leaves the bubble inflated at perilous extremes… and the eventual pop could be a thing for the ages.

Pay now or pay later, that is.

But either way… pay.

Are you still sure you want this job, Mr. Powell?