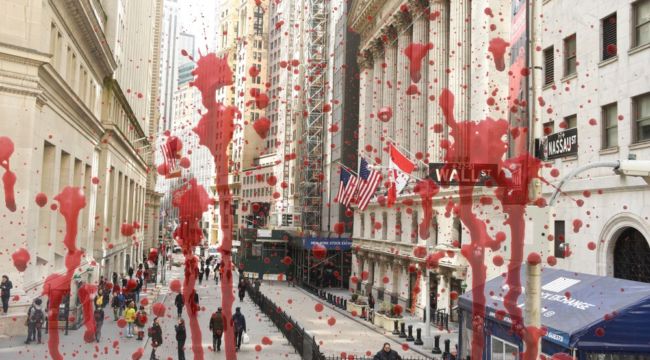 Here is the butcher’s bill:

The Nasdaq Composite — down 355 points.

Monday’s moves came as investors watch developments surrounding the coronavirus outbreak that was first reported in China but has spread rapidly in other countries especially South Korea and Italy, which reported a spike in the number of confirmed cases in recent days.

South Korea raised its coronavirus alert to the “highest level” over the weekend, with the latest spike in numbers bringing the total infected to more than 750 — making it the country with the most cases outside mainland China.

Meanwhile, outside of Asia, Italy has been the worst affected country so far, with more than 130 reported cases and three deaths.

Gold, meantime, was up nearly $30 today as investors fled for safety.

But late in the day someone — or something — jettisoned out some $3 billion of gold futures.

Thus, gold ended up gaining only $14 by closing whistle.

Who… or what… emptied all that paper gold into the market?

We do not know at this point. But we have put our top men on the case.

What about Treasuries? How did 10-year Treasury yields act today?

One more slip on the ladder… and “look out below.”

This is according to Mr. Ian Lyngen, BMO Capital’s director of U.S. rates strategy:

The most important number in the U.S. Treasury market has become 1.3180% — the all-time record-low yield mark set in the aftermath of Brexit. If that level is breached, look out below.

We will indeed — look out below, that is.

And what is this crossing our vision on a downward heading?

It is the 30-year Treasury yield.

The 30-year Treasury yield did plummet to record lows today — to an anorexic 1.814%.

Not in its entire history has the 30-year Treasury bond offered such a slender yield.

Impossible — but there you have it.

Have markets lost their nerve… or recovered covered their senses?

If they have lost their nerve, upcoming Federal Reserve easing will likely stiffen their spines.

We are supremely confident it is coming. In fact…

They should not wait for their March meeting to “deal with this clear and pressing danger.”

We allow for the possibility…

With today’s whaling, both Dow Jones and S&P have handed back all their gains since Jan. 1.

And the worst of the bloodspill is not over, argues Opportunistic Trader CEO Larry Benedict:

“The second-largest economy in the world is completely shut down. People aren’t totally pricing that in. It seems like there’s much more to come.”

This fellow believes the stock market may be entering a 10–15% “correction.”

But the stock market is an ingenious device constructed to inflict the greatest suffering upon the most people within the least amount of time.

And so today it served its high and moral purpose.

The intelligent investor — says the shade of Benjamin Graham — “is a realist who sells to optimists and buys from pessimists.”

Thus The Seattle Times informs us:

“Mom and Pop Are on Epic Stock Buying Spree With Free Trades.”

Small investors are back. In a big way.

Their fingerprints are on Apple’s staggering rally. They piled into Tesla as it tripled, and turned speculative fliers like Virgin Galactic into some of the most heavily traded shares in the country…

U.S. households are turning more optimistic on the stock market. According to the latest sentiment reading from The Conference Board, the share of respondents expecting stocks to rise in the next year advanced to 43.1% in January, the highest since October 2018.

Online trading platforms that offer free trading have sugared the “deal”… and called the lemmings closer to the cliff.

When you take a bull market and juice it with zero commission trading, we can expect it to generate interest among retail acco‌unts. That, it did. Retail traders have become manic.

Few are manic today we hazard.

Buy when there’s blood in the streets, argues the old market wheeze.

Here is your chance.