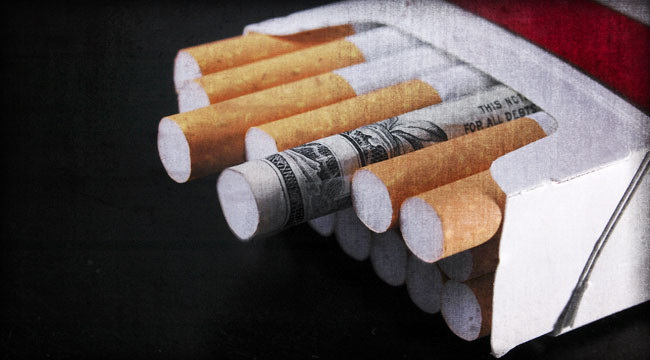 The market has selected different things as money throughout history. Some of these items have served as money in isolated places for specific periods of time — for instance, cigarettes in prisoner-of-war camps. Cigarettes continue to be a currency in prisons if allowed, but if not, according to Wikipedia, “postage stamps have become a more common currency item, along with any inexpensive, popular item that has a round number price, such as 25 or 50 cents. Mylar foil packets of mackerel fish, or ‘macks,’ are one such item.”

Cigs, stamps, macks? Doesn’t seem very cool, like, say, a gold doubloon, but the market decides what’s cool, despite what Matthew O’Brien at The Atlantic thinks. Apparently, he’s not a big fan of the cybercurrency Bitcoin.

He writes that only techno-libertarians will transact business in Bitcoin, and compares the cybercoin of the virtual realm to Segways. O’Brien reminds us these stand-up motorized vehicles were at one time thought to become a big deal. I only see cops whiz by on them at the Hartsfield-Jackson airport in Atlanta.

Senators, being senators, worry about things like whether the cybercurrency is financing terrorism or whether Bitcoins can be used to evade taxes. Neither is likely.

O’Brien describes Bitcoin as “inherently ridiculous.” The price swings alone make the cybercurrency look more like a dot-com stock than money. What The Atlantic senior associate editor can’t explain is why the price of Bitcoin has exploded recently. He writes something about demand from China and the Fed’s seizure of Silk Road’s considerable Bitcoin stash.

But he’s not paying attention. “Senior U.S. law enforcement and regulatory officials said they see benefits in digital forms of money and are making progress in tackling its risks,” Ryan Tracy reports for The Wall Street Journal. “The price of Bitcoin, the most common virtual currency, soared to a record following the comments.”

That won’t sway The Atlantic writer’s mind. O’Brien believes “Bitcoin… has deeper problems. Its product doesn’t work.” However, Washington has had a dog in the Bitcoin fight ,since it seized 26,000 of them from Silk Road. At around $18 million, it’s enough to keep the Department of Justice interested. So count DOJ attorneys along with the libertarian nerds rooting for the cybercurrency.

In a testimony before the Senate Homeland Security and Governmental Affairs Committee, Mythili Raman stated, “The Department of Justice recognizes that many virtual currency systems offer legitimate financial services and have the potential to promote more efficient global commerce.” Raman is the current acting assistant attorney general for the department’s criminal division.

Bitcoin and virtual currencies are a direct attack on central bank monetary management. Yet even Ben Bernanke, in a letter to senators, said virtual currencies “may hold long-term promise, particularly if the innovations promote a faster, more secure, and more efficient payment system.”

Senators, being senators, worry about things like whether the cybercurrency is financing terrorism or whether Bitcoins can be used to evade taxes. Neither is likely.

What Bitcoin can do is be moved instantaneously around the world. With something as simple as cellphones thousands of miles and many time zones apart, the cybercurrency can be transported via Skype.

Try moving dollars through your bank. You have to fill out forms, show ID, and have a human being input data. Then more of the same happens on the other end — when the bank opens, that is. Bitcoin has shown the Federal Reserve how it’s done. In a report called Payment System Improvement — Public Consultation Paper, the Fed calls for banks to speed up payment systems. The central bank wants to see “a ubiquitous system for near-real-time payments.”

End-users, the Fed points out, want real-time validation of payment and posting, assurance the payment will not be returned, timely notification, and “masked account details, eliminating the need for end-users to disclose bank account information to each other.”

This sounds familiar to anyone who uses Bitcoin. Validation of transactions is nearly instantaneous in the blockchain. Bitcoin transfer is not a credit transaction, but a transfer of assets. There is no third party in the middle to return a payment. And of course, payments are done anonymously. No financial disclosures are required.

So while end-users tell the Fed they want assurances against returned payments, O’Brien writes that a weakness of Bitcoin is there is no third party making sure everyone is satisfied. Financial intermediaries “make sure buyers and sellers are both trustworthy, and handle any disputes,” writes O’Brien, who wants to make sure people can get their money back if things go awry.

He actually doesn’t believe people will use the cybercurrency to pay for things at all. Thus his quip, “Bitcoin is a Ponzi scheme libertarians use to make money off each other — because gold wasn’t enough of one for them.”

The deflationary bias, O’Brien says, means the price will be volatile. The limited supply of Bitcoin will mean it will rise in value against the dollar, but early speculators will then sell, driving the price down “quite violently.” From there, he voices his incorrect analogy to Mr. Ponzi.

Because of Satoshi Nakamoto, we have the rare opportunity in history to watch the birth of a currency. It’s not always a smooth process. In his book, Principles of Economics, Carl Menger, the father of Austrian economics, wrote about how any commodity can be traded as money because of its greater marketability:

“This knowledge will never be attained by all members of a people at the same time. On the contrary, only a small number of economizing individuals will at first recognize the advantage accruing to them from the acceptance of other, more saleable, commodities in exchange for their own whenever a direct exchange of their commodities for the goods they wish to consume is impossible or highly uncertain.”

As people become successful trading any good or commodity as money, more people will in turn trade fewer marketable goods for that more marketable one. “Since there is no better way in which men can become enlightened about their economic interests than by observation of the economic success of those who employ the correct means of achieving their ends,” writes Menger.

The Bitcoin market is tiny compared with government currencies, especially the dollar. As the new cybercurrency gains acceptance, its price in dollars can reasonably be expected to be volatile. But as futures markets develop and ways to sell Bitcoin short are created, the price action for the cybercurrency will smooth out.

The question isn’t whether Bitcoin is a Segway, but whether it’s a prison cigarette or a gold doubloon. Either way, Bitcoin is money.