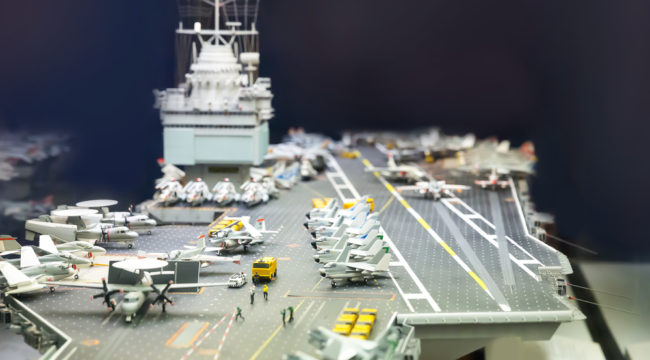 The Biggest Defense Story of 2017

President Donald Trump will usher in a military spending boom in order to, in his words, “Make the Military Great Again.”

This is what Jim Rickards calls America’s Third-Wave of Military Technology Advancement.

Based on our research, one military branch will be awarded the lion’s share of Trump’s military spending boom dollars. All told, billions of dollars will be directed into this area as President Trump’s agenda is formalized and implemented.

The #1 defense technology story of 2017 is the coming U.S. naval buildup.

It’s not the sexiest… or the most cutting edge… but it will prove profitable for investors properly positioned for what’s about to happen.

As Jim Rickards has noted, “Military technology advances in long-cycles driven by politics and procurement.”

The U.S. Navy is no exception…

As a student of military history at Princeton… A 20-year airborne ranger veteran… and the former ranking defense contracting executive in the Middle East, I can state unequivocally that the U.S. military strategy — and therefore its spending pattern — oscillates over the long-term between:

There are two reasons for this:

1) The Shortsightedness of Our Politicians

Right now the U.S. Navy has the smallest number of ships since 1916. WWII was obviously an outlier in the magnitude of the navy’s buildup and it coinciding with a massive land war. But the noteworthy pattern over the course of history is that the increase in active navy ships happens in large steps all at once.

Then, that build-up stops. And, over the course of years, it slowly dwindles. This slow rundown usually corresponds with the armed forces focusing on a land campaign or guerilla warfare of some kind.

That’s the pattern for U.S. military resources: From land wars… to naval buildups… back to land excursions…

For example, after the U.S. role in WWI, naval expenditures dropped substantially. Then in WWII , the U.S. experienced a huge increase in its active navy.

Post-WWII, the number of active navy ships fell off dramatically while resources were put into rebuilding Europe via the Marshall Plan and Douglas MacArthur’s occupation and reconstruction of Japan.

Then the navy was built up again, right before the U.S. entered the Korean War in 1950. Which, again shifted resources to the land campaign.

The same pattern continued through the 1960s and 1970s at the end of the war in Southeast Asia. The Soviet navy began to overtake the U.S. navy with over-the-horizon cruise missiles and a highly competent submarine force.

The restoration of the U.S. Navy would be left to the newly elected President Reagan and his Secretary of the Navy, John Lehman. Both men made a famous push in the early 1980s to restore a 600-ship navy.

Today we find ourselves in a similar situation…

Since 2001, we’ve spent 15 years in the Middle East waging war and anti-guerrilla campaigns. Meanwhile, the navy was reduced to 280 ships to fund those wars. That’s the lowest level since 1916, as stated.

By 2010, the territorial disputes in the Pacific Rim raised regional concerns about sea-lanes and naval power projection among U.S. planners and regional allies.

This led a bipartisan congressionally mandated defense panel to press the Pentagon to think beyond its counter insurgencies in Afghanistan and Iraq. The panel urged steps to restore the U.S. Navy, culminating in the 2011 announcement of what President Obama and Secretary of State Hillary Clinton called the “pivot” to the Asia-Pacific.

The concern was Chinese aggrandizement in the Pacific. I know this firsthand. In October 2015, as the International Senior Vice President for a prominent defense contractor, I led a delegation of executives to the Royal Australian Navy Sea Power Conference in Sydney.

Among our many meetings with Australian officials and the U.S. diplomatic mission, I was most taken aback to see Vice Admiral Tim Barrett, Australia’s Chief of Navy, joined on a platform by both the Chief of Army and the Chief of Air Force. 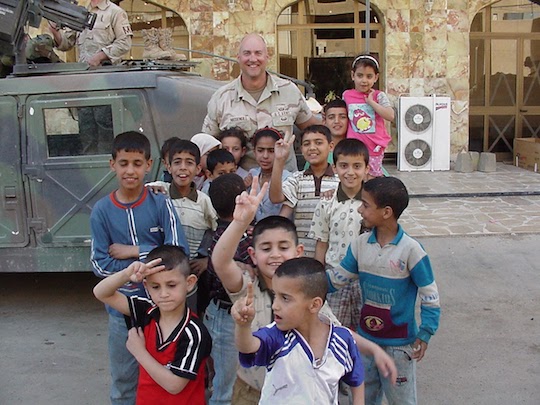 Your correspondent on duty in Baghdad in 2003. This was the U.S.’s last land campaign preceding the coming U.S. naval buildup.

They were explaining how regional naval developments, led by China, were forcing Australia to undertake its first peacetime expansion of their navy…in their entire history!

With these developments in mind, what would you do in President Trump’s position?

Jim Rickards has said you might well decide that the U.S. is best served by isolating China and protecting your strategic flanks…

This “tag team” gambit could be Trump’s strategic goal. Jim suggested as much in a recent article he wrote for The Daily Reckoning.

The U.S… China… and Russia are the world’s three big powers. When you have this power triangle dynamic, you either team up with another power against the third… or you are teamed up on.

For the last eight years, the Obama administration was teamed-up on by Russia and China. Now, in addition to reverting to a U.S. naval buildup focused on the Pacific, President Trump might hedge that build up by growing far closer with Vladimir Putin.

I would not be surprised to see a high-profile U.S. – Russian rapprochement culminating in a series of summit meetings in DC and Moscow. This could even lead to a new world order geopolitically.

“‘work with Congress to fully repeal the defense sequester and submit a new budget to rebuild our depleted military.’ Under his proposal, he would aim to ’rebuild the U.S. Navy toward a goal of 350 ships, as the bipartisan National Defense Panel recommended.’

As a result of all of that, rest assured, there will be some fat and happy defense contractors bidding for gigs under Trump’s presidency.”

This isn’t idle speculation, either. Donald Trump made an explicit campaign promise to this effect, publishing a memo on Oct. 21, 2016, days before the election. It describes what upgrades and investments will be made and specifically promises that:

“On Day One of his administration, he will immediately begin to fulfill that promise with a Manhattan Project urgency to rebuild our navy…”

And according to a new report by the Associated Press, “boosting shipbuilding to meet the navy’s 355-ship goal could require an additional$5 billion to $5.5 billion in annual spending in the navy’s 30-year projection, according to an estimate by naval analyst Ronald O’Rourke at the Congressional Research Service.” [emphasis added]

You could go off with this information and buy shares in a big defense contractor in the naval space like Huntington Ingalls. I wouldn’t recommend it, though. It’s a great company, but because it’s such a big player, the share price won’t move much… even with all of the proof of this coming naval buildup I’ve shown you.

That’s why we target smaller firms in Defense Technology Alert. Ones that are set to either land a company-changing contract… or are little-known suppliers to one of the big names… or that have developed a brand-new technology… or that are going to be driven higher by headlines and momentum. But they’re selections based on their potential for big moves in share prices.

These smaller plays aren’t covered by the big institutional players since they’re too small for them to buy. But in my decades of experience in the defense contracting space, there are true diamonds in the rough… If you know how to identify them.