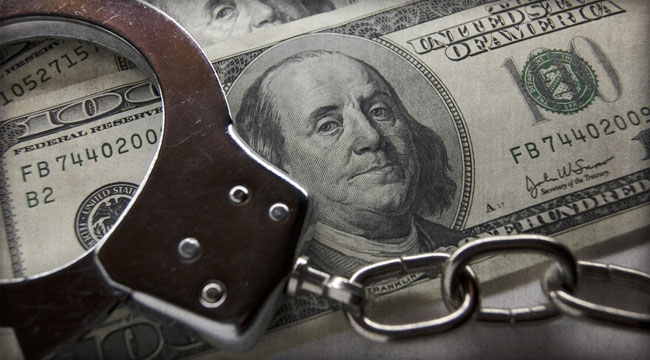 Beware the Return of Debtor's Prison

How does a stop for jaywalking turn into a homicide and how does that turn into an American town essentially coming under military control with snipers, tear gas, and a no-fly zone? We don’t yet know exactly what happened between the two individuals on the day in question but events like this don’t happen without a deeper context. Part of the context is the return of debtor’s prisons that I wrote about in 2012.

Debtor’s prisons are supposed to be illegal in the United States but today poor people who fail to pay even small criminal justice fees are routinely being imprisoned. The problem has gotten worse recently because strapped states have dramatically increased the number of criminal justice fees….Failure to pay criminal justice fees can result in revocation of an individual’s drivers license, arrest and imprisonment. Individuals with revoked licenses who drive (say to work to earn money to pay their fees) and are apprehended can be further fined and imprisoned. Unpaid criminal justice debt also results in damaged credit reports and reduced housing and employment prospects. Furthermore, failure to pay fees can mean a violation of probation and parole terms which makes an individual ineligible for Federal programs such as food stamps, Temporary Assistance to Needy Family funds and Social Security Income for the elderly and disabled.

A new report from Arch City Defenders, a non-profit legal defense organization, shows that the Ferguson municipal courts are a stunning example of these problems:

Ferguson is a city located in northern St. Louis County with 21,203 residents living in 8,192 households. The majority (67%) of residents are African-American…22% of residents live below the poverty level.

…Despite Ferguson’s relative poverty, fines and court fees comprise the second largest source of revenue for the city, a total of $2,635,400. In 2013, the Ferguson Municipal Court disposed of 24,532 warrants and 12,018 cases, or about 3 warrants and 1.5 cases per household.

You don’t get $321 in fines and fees and 3 warrants per household from an about-average crime rate. You get numbers like this from bullshit arrests for jaywalking and constant “low level harassment involving traffic stops, court appearances, high fines, and the threat of jail for failure to pay.”

If you have money, for example, you can easily get a speeding ticket converted to a non-moving violation. But if you don’t have money it’s often the start of a downward spiral that is hard to pull out of:

For a simple speeding ticket, an attorney is paid $50-$100, the municipality is paid $150-$200 in fines and court costs, and the defendant avoids points on his or her license as well as a possible increase in insurance costs. For simple cases, neither the attorney nor the defendant must appear in court.

However, if you do not have the ability to hire an attorney or pay fines, you do not get the benefit of the amendment, you are assessed points, your license risks suspension and you still owe the municipality money you cannot afford….If you cannot pay the amount in full, you must appear in court on that night to explain why. If you miss court, a warrant will likely be issued for your arrest.

People who are arrested on a warrant for failure to appear in court to pay the fines frequently sit in jail for an extended period. None of the municipalities has court on a daily basis and some courts meet only once per month. If you are arrested on a warrant in one of these jurisdictions and are unable to pay the bond, you may spend as much as three weeks in jail waiting to see a judge.

Of course, if you are arrested and jailed you will probably lose your job and perhaps also your apartment–all because of a speeding ticket.

As a final outrage, consider this story which ties together Ferguson, the courts, and the arrest of parents, often minority parents, for leaving their kids to play in parks (just as my parents did).

According to local judge Frank Vatterott, 37% of the courts responding to his survey unconstitutionally closed the courts to non-defendants. Defendants are then faced with the choice of leaving their kids on the parking lot or going into court. As Antonio Morgan described after being denied entry to the court with his children, the decision to leave his kids with a friend resulted in a charge of child endangerment.

Alexander Tabarrok
for The Daily Reckoning

Ed. Note: These kinds of injustices happen every day, all over the United States. No one is immune. But there are steps you can take to ensure that no agent of the state encroaches on your personal freedoms. Sign up for the FREE Laissez Faire Today e-letter and you’ll gain access to an entire research library filled with great insights on everything from how to opt-out of Obamacare to how to survive the fall of Social Security. Click here now to sign up for FREE.

This article was originally featured in Marginal Revolution.

Alexander Tabarrok is Research Director for The Independent Institute, Assistant Editor of The Independent Review, Bartley J. Madden Chair in Economics at the Mercatus Center, and Associate Professor of Economics at George Mason University. He received his Ph.D. in economics from George Mason University, and he has taught at the University of Virginia and Ball State University. Dr. Tabarrok is the editor of The Independent Institute books, Entrepreneurial Economics: Bright Ideas from the Dismal Science (Oxford University Press), The Voluntary City: Choice, Community, and Civil Society (with David Beito and Peter Gordon, University of Michigan Press)