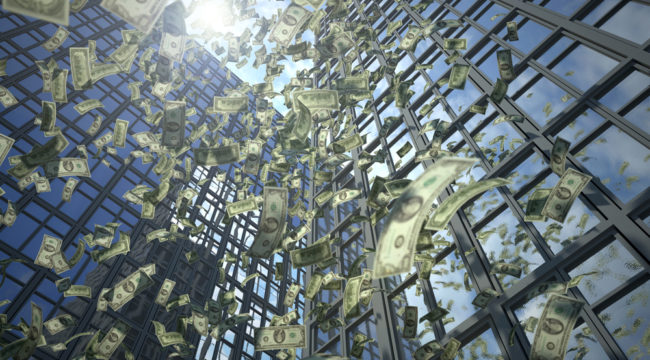 The Banking Crisis That Can Never Be Contained...

When President Obama signed the Dodd-Frank Wall Street “reforms” into law in 2010, he promised they would “bring the shadowy deals that caused this [financial] crisis into the light of day.”

We were “sold” that Dodd-Frank would end Wall Street insiders’ reckless risk-taking that cratered the global economy in 2008.

But most of all, it would end taxpayer bailouts of banks.

Sycophantic media pushed their Obama love to all-time highs on the news. And Americans connected to the Matrix… the ones asleep in a deep coma… well, they breathed a sigh of relief into their ventilators.

Paternal government patted the lemmings on the head and tucked them in bed with a smooch on the forehead. Everything was fine again.

All it took for happy days to return was a thick stack of regulations from D.C. hacks and the general populace rolled back over into a state of oblivion.

But the problem was never fixed. In fact, it’s gotten a whole lot worse…

The root cause of the financial crisis was reckless lending and excessive risk-taking by the world’s largest banks.

But after the Lehman Brothers collapse, the untold trillions in risky derivatives trades these banks had on their books caused the fire to burn beyond control.

Nobody knew how much exposure to derivatives other banks had. A huge bank could implode at any time. So nobody wanted to lend or trade with each other.

The global financial system ground to a halt. And it took billions upon billions of taxpayer money to rescue the system.

And if you believed that a labyrinth of rules devised by incompetent and crooked politicians controlled by Wall Street lobbyists was going to actually fix things, then there’s nothing I can do for you.

Those of us burdened by reality always knew better.

The bureaucrats started their Dodd-Frank charade by requiring that big Wall Street banks move their riskiest assets – credit default swaps and other derivatives – out of their FDIC-insured banks and onto the books of non-bank affiliates.

This way, if those assets went bad, U.S. taxpayers wouldn’t be required to provide a FDIC backstop. That meant no taxpayer bailout.

At least it did. But not anymore…

You see, Wall Street waited a few years until things quieted down to screw us again.

Banking behemoths like Citigroup and JP Morgan led an intense lobbying effort to roll back these regulations. Of course, they believe in capitalism when they’re making profits but socialism when they’re taking losses.

So they flooded D.C. with cash and lobbyists. And they got lawmakers to sneak a rules repeal into a last-minute government-funding bill to avert a government shutdown in 2014, which Deep State President Obama quickly signed.

In short, Wall Street gamed the system yet again. And when there’s another economic meltdown, the government made sure they can count on taxpayers like you to backstop their risky trades.

Dodd-Frank Is a Joke

Unfortunately, things have become far worse since 2009. The Feds have allowed big banks to load up on risk again…

Citigroup now holds $55 trillion derivatives on its balance sheet. J.P. Morgan and Goldman Sachs each have more than $50 trillion. And Bank of America has more than $45 trillion.

In all, the largest U.S. banks have more than $250 trillion of exposure to derivatives created for one purpose — they get rich, you get the shaft.

And not surprisingly, these banks don’t have a firm grip on these rocket-fueled trading positions. It’s impossible to predict what will happen to them or the assets they’re linked to, as we saw with the derivatives-related implosions of Long-Term Capital Management in 1998 and AIG in 2008.

And that’s a problem of epic proportions because the four largest banks in the U.S. are 40% bigger than they were back in 2008.

“Too big to fail” has become a parody, a cartoon of itself. And the FDIC, with its paltry $70 billion in “rescue” funds, is in no position to save these banks once they start imploding.

In fact, there isn’t enough money in the world to contain the next crisis once contagion sets in.

Of course, most Americans have been lulled into complacency. But that doesn’t change the reality—this danger is off the charts and likely can’t be stopped.

Nobody knows precisely when these banks will implode. But make no mistake: An implosion is coming.

We already saw a “no confidence” vote in the market decline last Wednesday. Citigroup and JPMorgan Chase fell by triple the amount of the S&P 500. Bank of America fell by 8 times more.

Smart money is deeply worried about what’s on the books of these banks.

In the face of all of this, ask yourself the critical question: Are you going to hold on to your stocks, hope for the best and trust the kleptocracy?

Or are you going to trust in an investing system that has outperformed traditional portfolios in all past market crashes for the past 110 years?

Remember, the government will not be there to save you when the next bank-inspired meltdown happens.

Please send me your comments to coveluncensored@agorafinancial.com. Let me know what you think about today’s issue.