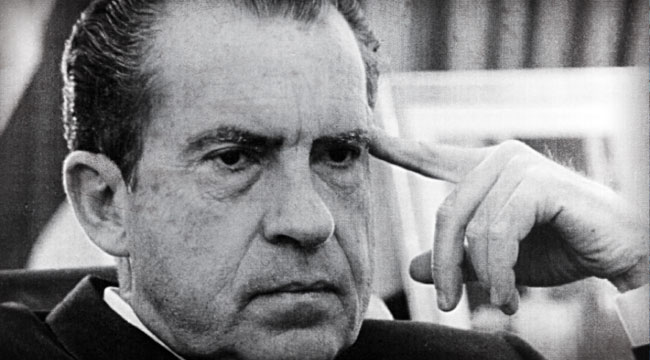 Another Crisis of Confidence in the Dollar is Coming

On August 15, 1971, a quiet Sunday evening, President Richard Nixon took to the airwaves, preempting the most popular television show in America, to announce his New Economic Policy. The government was imposing national price controls and a steep surtax on foreign imports and banning the conversion of dollars into gold. The country was in the midst of a crisis, the result of an ongoing currency war that had destroyed faith in the U.S. dollar, and the president had determined that extreme measures were necessary.

Today we are engaged in a new currency war, and another crisis of confidence in the dollar is on its way. This time the consequences will be far worse than those confronting Nixon. The growth in globalization, derivatives and leverage over the past forty years have made financial panic and contagion all but impossible to contain.

The new crisis will likely begin in the currency markets and spread quickly to stocks, bonds and commodities. When the dollar collapses, the dollar-denominated markets will collapse too. Panic will quickly spread throughout the world.

As a result, another U.S. president, possibly President Obama, will take to the airwaves and cyberspace to announce a radical plan of intervention to save the dollar from complete collapse, invoking legal authority already in place today. This new plan may even involve a return to the gold standard. If gold is used, it will be at a dramatically higher price in order to support the bloated money supply with the fixed quantity of gold available.

Americans who had invested in gold earlier will be confronted with a 90 percent “windfall profits” tax on their newfound wealth, imposed in the name of fairness. European and Japanese gold presently stored in New York will be confiscated and converted to use in the service of the New Dollar Policy. No doubt the Europeans and Japanese will be given receipts for their former gold, convertible into New Dollars at a new, higher price.

Alternatively, the president may eschew a return to gold and use an array of capital controls and global IMF money creation to reliquify and stabilize the situation. This IMF global bailout will not be in old, nonconvertible dollars but in a newly printed global currency called the SDR. Life will go on but the international monetary system will never be the same.

Life will go on but the international monetary system will never be the same.

This isn’t far-fetched speculation. It has all happened before. Time and again, paper currencies have collapsed, assets have been frozen, gold has been confiscated and capital controls have been imposed.

The United States has not been immune to these acts; in fact, America has been a leading advocate of dollar debasement from the 1770s to the 1970s, through the Revolution, the Civil War, the Great Depression and Carter-era hyperinflation. The fact that a currency collapse has not happened in a generation just implies that the next crash is overdue. This is not a matter of guesswork — the preconditions are already in place.

Today, the U.S. Federal Reserve is engaged in the greatest gamble in the history of finance. Beginning in 2007, the Fed fought off economic collapse by cutting short-term interest rates and lending freely. Eventually rates reached zero, and the Fed appeared to be “out of bullets.”

Then, in 2008, the Fed found a new bullet: quantitative easing. While the Fed describes the program as an easing of financial conditions through the lowering of long-term interest rates, this is essentially a program of printing money to spur growth.

The Fed is attempting to inflate asset prices, commodity prices and consumer prices to offset the natural deflation that follows a crash. It is basically engaged in a game of tug-of-war against the deflation that normally accompanies a depression. As in a typical tug-of-war, not much happens at first.

The teams are evenly matched and there is no motion for a while, just lots of tension on the rope. Eventually one side will collapse, and the other side will drag the losers over the line to claim victory. This is the essence of the Fed’s gamble. It must cause inflation before deflation prevails; it must win the tug-of-war.

In a tug-of-war, the rope is the channel through which stress is conveyed from one side to the other. In the contest between inflation and deflation, the rope is the dollar. The dollar bears all the stress of the opposing forces and sends that stress around the world. The value of the dollar is the way to tell who is winning the tug-of-war. This particular tug-of-war is actually a full-on currency war, and it is not really a game but an attack on the value of every stock, bond and commodity in the world.

In the best of all possible worlds for the Fed, asset values are propped up, banks get healthier, government debt melts away and no one seems to notice. Yet, by printing money on an unprecedented scale, Bernanke has become a twenty-first-century Pangloss, hoping for the best and quite unprepared for the worst.

There is a very real danger that the Fed’s money printing could suddenly morph into hyperinflation. Even if inflation does not affect consumer prices, it can show up in asset prices leading to bubbles in stocks, commodities, land and other hard assets — bubbles that are prone to burst like tech stocks in 2000 or housing in 2007.

The Fed claims to have the tools needed to avert these outcomes, but those tools have never been tried in these circumstances or on such a large scale. The Fed’s remedies — higher rates and tight money — are likely to lead straight to the kind of depression the Fed set out to avoid in the first place. The U.S. economy is resting on a knife’s edge between depression and hyperinflation. Millions of investors, business owners and workers wonder how much longer the Fed can balance the knife.

Worse yet, none of this happens in a vacuum. If the Fed’s policy manipulations were limited to the U.S. economy, that would be one thing, but they are not. The effects of printing dollars are global; by engaging in quantitative easing, the Fed has effectively declared currency war on the world. Many of the feared effects of Fed policy in the United States are already appearing overseas. Printing dollars at home means higher inflation in China, higher food prices in Egypt and stock bubbles in Brazil.

There is a very real danger that the Fed’s money printing could suddenly morph into hyperinflation.

Printing money means that U.S. debt is devalued so foreign creditors get paid back in cheaper dollars. The devaluation means higher unemployment in developing economies as their exports become more expensive for Americans. The resulting inflation also means higher prices for inputs needed in developing economies like copper, corn, oil and wheat. Foreign countries have begun to fight back against U.S.-caused inflation through subsidies, tariffs and capital controls; the currency war is expanding fast.

While Fed money printing on a trillion-dollar scale may be new, currency wars are not. Currency wars have been fought before — twice in the twentieth century alone — and they always end badly. At best, currency wars offer the sorry spectacle of countries stealing growth from trading partners. At worst, they degenerate into sequential bouts of inflation, recession, retaliation and actual violence as the scramble for resources leads to invasion and war. The historical precedents are sobering enough, but the dangers today are even greater, exponentially increased by the scale and complexity of financial linkages throughout the world.

Baffling to many observers is the rank failure of economists to foresee or prevent the economic catastrophes of recent years. Not only have their theories failed to prevent calamity, they are making the currency wars worse. The economists’ latest solutions — such as the global currency called the SDR — present hidden new dangers while resolving none of the current dilemmas.

Among the new dangers are threats not just to America’s economic well-being but to our national security as well.

As national security experts examine currency issues traditionally left to the Treasury, new threats continually come into focus, from clandestine gold purchases by China to the hidden agendas of sovereign wealth funds. Greater than any single threat is the ultimate danger of the collapse of the dollar itself. Senior military and intelligence officials have now come to the realization that America’s unique military predominance can be maintained only with an equally unique and predominant role for the dollar. If the dollar falls, America’s national security falls with it.

While the outcome of the current currency war is not yet certain, some version of the worst-case scenario is almost inevitable if U.S. and world economic leaders fail to learn from the mistakes of their predecessors.

Ed. Note: When the dollar based monetary system eventually collapses, will you be prepared for it? Sign up for the Daily Reckoning email edition, for FREE, right here to discover actionable ways you can safeguard and even grow your wealth no matter what happens.