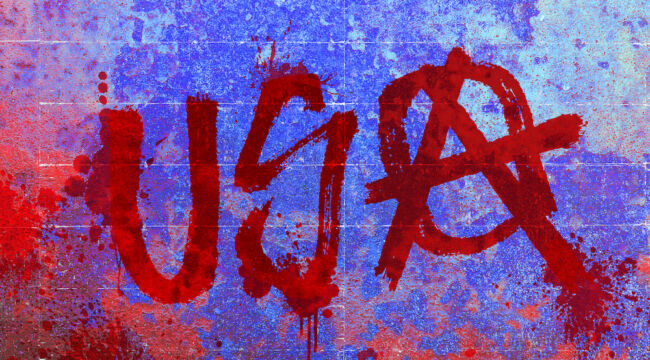 Anarchy implies the murder of law, of order… both borne away by the whirlwind.

American cities have been scenes of anarchy.

How else would a fellow explain Minneapolis police taking to their heels — and abandoning their base to the fiery mob — who proceeded to set it ablaze?

How else would he explain Seattle’s Capitol Hill Autonomous Zone (presently defunct)… or “antifa’s” siege of Portland, Oregon (ongoing).

It is anarchy from below. Yet as Chesterton noted:

That is, it may impose anarchy from above…

Governments have ordered churches to scatter their flocks — and bolt their doors.

And has the Grim Reaper called on a loved one recently?

Then you may have been unable to pay your last respects. That is because governments restricted graveside sendoffs to a handful of bereaved.

These are the grim but necessary costs of containing a pandemic, we have been told.

Yet the same governments that barred you from your sister’s funeral, that locked you out of Sunday service… have blessed the mightiest mass gatherings we have ever encountered.

We refer of course to the George Floyd protests.

15-26 million Americans swarmed the streets… each one a potential plague-spreader… in over 2,000 cities… in all 50 states of this union… plus the District of Columbia.

Reduce it to its essence. And this is what you must conclude:

The rules likewise war against justice itself…

The umbrella of law must cover all alike. Else it is not law. It is anti-law, a travesty of law, a bonfire of law.

It is anarchy from above…

Heather MacDonald of the Manhattan Institute:

The lockdown mandates employed mind-numbingly arbitrary distinctions. Wine stores and pot dispensaries were deemed “essential” and thus allowed to stay open; medical offices were required to close. Large grocery stores got the green light; small retail establishments with only a few customers each day were out of luck. Michigan Governor Gretchen Whitmer notoriously used her red pen within megastores to bar the sale of seeds, gardening supplies, and paint.

Next we come to the “excesses” of the protests:

Government officials, having shut down commerce due to unblemished ignorance of how markets work, now enabled the torching and looting of thousands of businesses due to the shirking of their most profound responsibility: protecting civil peace.

Most remarkably, public officials overtly admitted to choosing the forms of assembly that would be allowed based on the content of the protesters’ speech. Mayor de Blasio explained that protests over “400 years of American racism” are not the same as a “store owner or the devout religious person who wants to go back to services.” While the store owner or worshipper may be “understandably aggrieved,” he conceded, their grievances must still be suppressed in the name of coronavirus safety. Not the grievances of the protesters and rioters, however.

The activist and the nail salon entrepreneur may inhabit “different orbits.”

Yet the virus circles in both. And in vastly greater quantities — we must assume — in the protesters’ circle.

Why then is the activist exempt from the rules that bind and chafe the nail salon entrepreneur?

They engineered the destruction of trillions of dollars of wealth, through thoroughly arbitrary decision making. And then they stood by as billions more dollars of work burned down. Public order and safety, equal treatment under the law, stability of expectations… have been decimated.

Not Just the Blue State Politicians

We level our darts at liberals, at conservatives, at progressives, at moderates.

That is because they all invade our peace and dignity in one form or other — as well as our wallet.

And we remind you that red state officials have also imposed arbitrary economic lockdowns and antisocial distancing dictates.

These bipartisan assaults on enterprise have yielded up to 150,000 “deaths of despair.”

These are killings by suicide, by drink, by drug, etc.

How many Americans has the virus murdered?

Anarchy From the Very Top

Yet we have failed to mention the arbitrary, chaotic and lunatic policies of the United States government — and its central bank.

The entire public debt was $863 billion in 1980. The federal government had required 192 years and 39 presidents to scale that inglorious height.

Thus in 30 days, David shrieks, the government of the United States borrowed nearly two centuries worth of debt.

This year’s deficit may near or exceed $5 trillion.

It has fabricated $3 trillion in four months’ space. It may fabricate $7 trillion more by year’s end if our sources are accurate.

And who can say what additional skullduggeries it will get up to?

Are We the People granted a vote on any of it?

Our entire central bank controlled financial system is based on the premise that unelected, unaccountable bureaucrats should be able to direct individuals’ consumption and production behavior from ivory tower conclaves.

Anarchy in every direction…