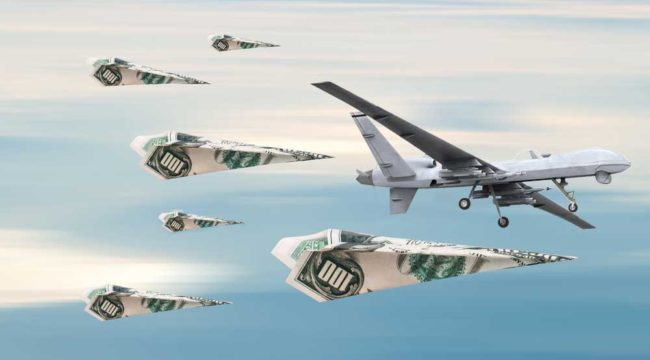 America's Weapons: "The Dollar and the Drone"

It was said that “the guinea and the gallows” were the true instruments of British imperial power.

The guinea represented the coined wealth of Great Britain.

The gallows represented its… constabulary zeal in policing restless natives.

This is the 21st century of course… a time of enlightenment.

Today’s instruments of imperial power are no longer the guinea and the gallows.

No. Today’s instruments of imperial power are “the dollar and the drone.”

The dollar and the drone are America’s weapons.

Like the 19th-century pound (which replaced the guinea), today’s dollar is the world’s reserve currency.

Like the 19th-century pound, the dollar finances some two-thirds of global trade.

Britain hanged its foreign trouble. America explodes its own in drone attacks.

Here is civilization; here is progress.

The sun eventually sank on the British Empire… the gallows came down… and the pound lost its global reserve status.

The U.S. will have its drones. But is its other weapon, the dollar, close to losing global reserve status?

The global oil trade has centered on the dollar since 1974, when Saudi Arabia agreed to enthrone the dollar as currency of the oil market.

If it was oil you wanted… it was dollars you needed.

But now China — world’s top oil importer — is preparing to create an oil market that bypasses the dollar entirely.

The plan would let China buy oil from Russia and Iran with its own currency, the yuan.

But the yuan is not a major reserve currency like the dollar.

Under this plan, Russia and Iran would be able to swap yuan for an asset far more desirable than Chinese scraps of paper — gold itself.

Perhaps that explains why China’s been hoarding so much gold in recent years?

Jim Rickards says this system marks the beginning of the end for the petrodollar:

China, Russia and Iran are coordinating a new international monetary order that does not involve U.S. dollars. It has several parts, which together spell dollar doom. The first part is that China will buy oil from Russia and Iran in exchange for yuan.

The yuan is not a major reserve currency, so it’s not an especially attractive asset for Russia or Iran to hold. China solves that problem by offering to convert yuan into gold on a spot basis on the Shanghai Gold Exchange…

This marks the beginning of the end of the petrodollar system that Henry Kissinger worked out with Saudi Arabia in 1974, after Nixon abandoned gold.

But it’s not only China, Russia and Iran that are out to dethrone King Dollar.

They’re joined by the rest of the “BRICS” nations — Brazil, India, South Africa.

Together they represent 25% of global economic output.

The message, clear as gin: The dollar’s days of “exorbitant privilege” must end.

If China doesn’t follow these sanctions, we will put additional sanctions on them and prevent them from accessing the U.S. and international dollar system. And that’s quite meaningful.

“Meaningful” might be one word for it. “Menacing” would be another.

SWIFT (Society for Worldwide Interbank Financial Telecommunication) is a network that facilitates trillions of dollars in international money transfers each year.

And to cut off China’s oxygen?

“That is why China buys gold,” Jim Rickards tweeted this morning from London.

Our colleague Dave Gonigam of The 5 Min. Forecast half-jestingly wonders, “Is the Trump administration trying to kill off the U.S. dollar’s status as the globe’s reserve currency?”

Of course, the dollar will not lose reserve status tomorrow, next week, next year.

But the direction of travel seems clear enough.

In 2000, dollar assets were about 70% of global reserves. Today, the comparable figure is about 62%. If this trend continues, one could easily see the dollar fall below 50% in the not-too-distant future.

How does one go bankrupt?