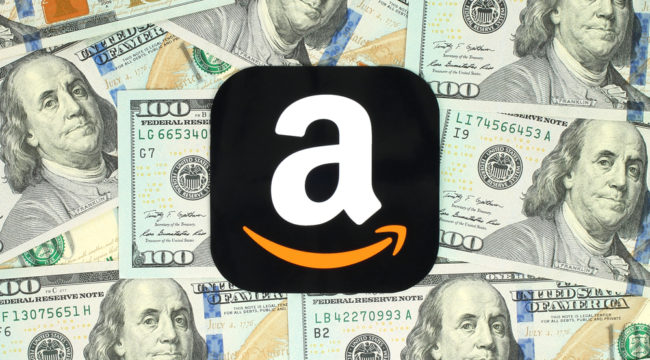 Amazon Is a Creation of Bubble Finance

Joseph Schumpeter, one of the great economists of all times, once described capitalism as “the perennial gale of creative destruction.”  In Capitalism, Socialism, and Democracy (1942), he wrote:

The opening up of new markets, foreign or domestic, and the organizational development from the craft shop to such concerns as U.S. Steel illustrate the same process of industrial mutation — if I may use that biological term—that incessantly revolutionizes the economic structure from within, incessantly destroying the old one, incessantly creating a new one. This process of Creative Destruction is the essential fact about capitalism.

I believe fully in the virtues of free market capitalism. Its “creative destruction” creates gains in efficiency and leads to technological innovation. It produces rising incomes and living standards for everyone.

And I strongly oppose attempts by the state to implement bailouts, subsidies and protectionist devices designed to keep buggy-whip makers in business after their time has gone.

Yet I quote the passage above because the day before yesterday I heard a stock peddler on bubble vision praising Amazon as an example of Schumpeter’s ideal.

Namely, that the destructive mayhem now underway in bricks and mortar retail is just the laws of capitalism at work. And that Amazon’s e-commerce juggernaut is creating far more new economic wealth and utility than it is destroying.

But I beg to differ.

Schumpeter assumed financial markets were honest and that the monetary system was sound. But he died in 1950 — long before Milton Friedman co-authored a grossly misleading book on how the Fed’s stinginess had caused the Great Depression (A Monetary History of the United States, 1963).

And Schumpeter died even longer before Friedman’s disciples at the central banks ushered in the era of Bubble Finance and monetary central planning we have today.

At the heart of monetary central planning is the massive falsification of financial asset prices. This is profoundly destructive because it distorts the signaling system of everyday capitalism. In turn, that causes sweeping malinvestments, irrational economic decisions and the vast waste of real economic resources.

But in carrying out its scorched earth policies across the retail landscape, Amazon is not doing God’s work, or even Schumpeter’s. It’s functioning as a giant predator motivated by false incentives to destroy perfectly serviceable assets, business operations and jobs.

Once again today, Amazon’s stock is trading above the $1,000 mark. That means its market cap is in the financial stratosphere at $478 billion.

But Amazon is 24 years-old, not a start-up. And it hasn’t invented anything explosively new like the i-Phone or personal computer. Instead, 91% of its sales involve storing, moving and delivering goods — a sector of the economy that has grown by just 2.2% annually in nominal dollars for the last decade. There is simply no macroeconomic basis for Amazon’s insane valuation.

Yes, it’s taking market share by leaps and bounds. But that’s inherently a one-time gain that can’t be capitalized in perpetuity. And this “growth” is generating new competition as the stronger elements of the bricks and mortar world are now piling on the e-commerce bandwagon.

Wal-Mart’s e-commerce sales, for example, have exploded, with sales rising 63% in the most recent quarter. Moreover, Wal-Mart has finally figured out the free shipments game. It increased its e-commerce offerings from 10 million to 50 million items just in the past year.

It is also rapidly learning how to leverage its massive existing asset base for e-commerce duty. This includes using its 4,700 stores as customer pick-up sites. It also has hundreds of distribution centers, a fleet of 6,200 trucks and a global sourcing system which is second to none.

And that gets to the larger point about Amazon’s predation and value destruction. Between 2010 and 2016 Amazon’s net sales exploded from $34.2 billion to $136 billion. But its pre-tax margin, which was already thin at 4.4% in 2016 clocked-in at just 2.9% in the year just completed.

Stated differently, on sales growth of $102 billion, Amazon posted only $2.5 billion of pre-tax profit gain. Indeed, apart from its cloud business (AWS) Amazon is essentially not a profit making institution at all.

And that’s also where the false signaling point needs be emphasized. In an honest free market, Jeff Bezos would be more than welcome to run a profitless growth machine. But it would also be valued accordingly.

I will readily grant that Bezos is a visionary and great capitalist innovator, builder and disrupter. But I would also lay heavy odds on the probability that his business strategy might be dramatically different — and far more profit oriented — under an honest free market.

In fact, based on the true facts of the Amazon e-commerce juggernaut, I think Bezos’ assault on the bricks and mortar sector would be far less menacing and reckless. And that’s giving full credit to the fact that online shopping and nearly instant delivery of goods is an enormous consumer boon that would be making great inroads even in an honest free market.

But it wouldn’t happen nearly as rapidly, wantonly or disruptively, because Amazon would be required to post a reasonable profit. And its stock price would reflect that reality, instead of riding the ridiculously false highs of Bubble Finance.

Indeed, the virtually profitless e-commerce monster that just keeps spending and expanding like some sci-fi blob is surely a measure of the mania at loose in the casino.

The fact is, every dime Amazon takes in is being recycled to more distribution centers, package handlers, hired delivery trucks and drone prototypes.

Needless to say, I do not think Amazon is a freakish outlier. It’s actually the lens through which the entire stock market should be viewed because the whole enchilada is now in the grips of a pure mania.

Stated differently, Graham & Dodd should move over: The stock market is no longer a discounting mechanism nor even a weighing machine. It’s become a pure gambling hall.

So Bezos’ e-commerce business strategy is that of a madman — one made mad by the fantastically false price signals emanating from a casino that has become utterly unhinged due to 30 years of Bubble Finance policies at the Fed and its fellow central banks around the planet.

Indeed, the chart below leaves nothing to the imagination. Since 2012, Amazon  stock price has bounded upward in nearly exact lock-step with the massive balance sheet expansion of the world’s three major central banks. 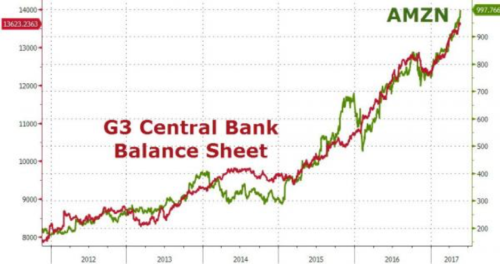 At the end of the day, however, the Amazon tale is about far more than the egregious overvaluation of the prime bubble stock of the current cycle, or even the $70 billion windfall (on paper)  that has accrued to Jeff Bezos.

Needless to say, none of this is happening in an economic vacuum.

What the Fed has actually unleashed is not the Schumpeterian process of true creative destruction.