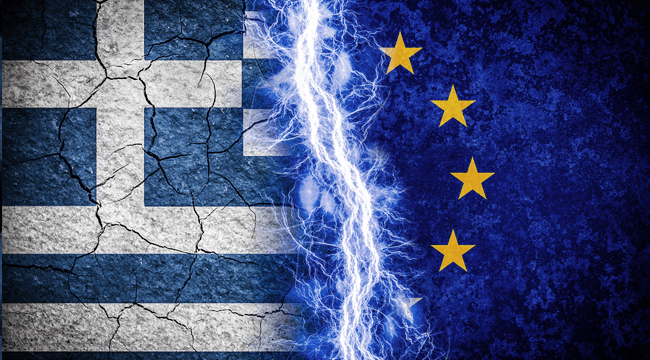 A Tale of Two Crises

Two stories dominate global financial headlines. The first is the meltdown of the Chinese stock market and efforts to organize a bailout fund to prop up the Shanghai Composite stock index. The other is the Greek referendum in which 60% of voters rejected the financial rescue terms offered by the “institutions” — the IMF, ECB and European Union. Global capital markets are a tale of two crises.

The two crises are different in their particulars, yet dangerously alike in their systemic implications. China is the second largest economy in the world; Greece does not rank in the top forty. Chinese financial assets are spread among hundreds of millions of investors, while Greek sovereign debt is concentrated in a few hands. China is an emerging market, while Greece is a developed economy. China is a top-down dictatorship, and Greece has just given the world a demonstration in bottom-up democracy.

Yet what sets these crises apart is trivial compared to what unites them. Both have the potential to ignite a global systemic meltdown. The world is even more fragile than it was in 2007. The big banks are bigger. Aggregate bank assets are concentrated in fewer hands. The bank derivatives books are much larger. Market liquidity is worse.

None of this is secret. Global financial elites have been shouting it from the rooftops. Warnings have poured in from the IMF, G20, World Bank, BIS and private think thanks. The warnings have mostly been ignored. The inmates (bankers) have continued to run the asylum (the financial system). Investors have continued to pile into stock and real estate bubbles from Wall Street to Wuhan in search of the elusive “yield.”

A crack-up was always just a matter of time. Is this the time? Are China and Greece the snowflakes that start the avalanche?

Probably not. The system is fragile and these crises are urgent. But they are also amenable to government responses ranging from plain vanilla bailouts to more extreme bail-ins, and the use of force majeure. Banks have already been closed in Greece. Exchanges may yet be closed in China. Individual bank and broker failures may proliferate. But the center should hold — for now.

Simply put, China may have a multibillion-dollar meltdown but it has a multitrillion-dollar fire hose in the form of its official reserves. China can adopt the “whatever it takes” mantra of Mario Draghi and they don’t even have to print money; they can just use their reserves.

The Greek situation is more difficult. There is less than meets the eye in the referendum. The “no” vote won overwhelmingly, but turnout was low. The deal that Greeks were voting on was never officially offered, and a new deal is certainly in the works. The referendum has no legally binding impact; it’s legally no more meaningful than a telephone poll.

But, it is politically significant and will force the two sides to get back to the bargaining table, probably on terms more favorable to Greece. The referendum did nothing to provide cash to Greece or to reopen the banks. Greece is still in crisis on the morning after. Both sides still have the same interest in a negotiated solution because both sides have far more to fear from failure than from a few more concessions. The surprise resignation of the Greek Finance Minister, Yanis Varoufakis, will relieve some of the personal animosity and make resumed negotiations easier.

So these crises will pass with the usual lists of winners and losers. Some investors in Chinese stocks were wiped out, but the market is already rebounding thanks to government intervention. Some investors in Greek bonds may be pleasantly surprised as well. The headlines will continue for the remainder of the summer, but markets will eventually digest the news and move on.

This is not to say that it’s “all good.” It’s not. The makings of a massive global meltdown are still in place. The official warnings are correct. The crack-up will not come from the things we can see – like Chinese stock bubbles, and Greek debt defaults — but from something none of us has factored in.

That’s the essence of complex systems. They are characterized by “emergent properties.” That means system behavior that cannot be inferred from perfect knowledge of all the parts of the system. The event that causes the crack-up will come like a thief in the night. Yet it will come.

A healthy allocation to hard assets such as gold, silver, land, and fine art is still recommended. Cash should have a place in every portfolio in such uncertain times. The lines at Chinese brokerage firms, and Greek ATMs should remind us that the time to protect your portfolio is not when the panic begins, but while there is still time to act. What are you waiting for?