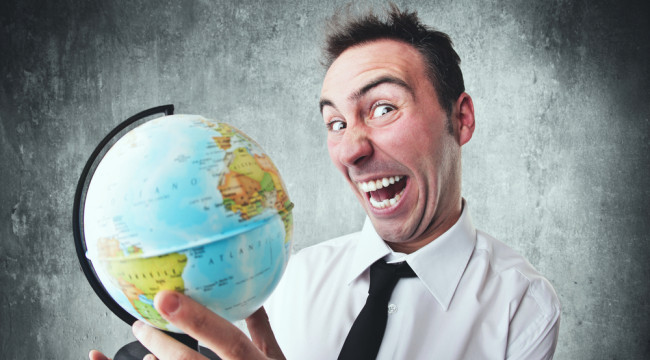 A Sane Strategy for an Insane World

When I was really young, in my 20s, I had a chance to intern at a major Federal agency for a summer.

Let me tell you… it was the most sad office environment I’ve ever seen.

Armies of out of shape people with bad hair and bad suits doing very little of substance, sitting around office cubes, waiting to collect their paychecks, pensions and sick leave.

No real oversight, and no real threat of being fired.

I think that’s a pretty good representation of local, State and Federal government in general: inefficient, lazy, incompetent, and people who just don’t care much.

My government view is not an exaggeration. It’s spot on.

Surprisingly, there’re a lot of people out there who think that government is the solution to all of our problems…. including market problems.

Take this year’s weakness in the stock market, for example.

Deutsche Bank recently sent a note to its clients saying that only the Fed can save stocks now.

In a way, that may even be true. But is that really your best strategy? To hope the Fed will step in and save the stock market?

I mean… Isn’t the Fed behind the major boom and busts of the last 15 years?

Of course it is. They engineered it.

Which is why I don’t even pay attention to their glowing announcements (lies) behind podiums littered with government seals.

Hoping the Fed will save us from the next bust makes no sense, unless you are a masochist who really enjoys pain.

What makes anyone think they will stop the next crash?

They won’t. That’s why it’s important to have a very tight plan in place.

In late 2005, for example, I wrote about the risks of a major market crash in my book Trend Following. And I warned that those without an exit strategy would get killed.

Some people even called me a doomsayer for saying that.

Let’s face it, my words then caused brokers and mutual funds to get hot and bothered.

I was going right after their livelihood—telling people that the idea that “markets will always go up” was a big lie.

But I wasn’t making a prediction. I was simply stating the fact that markets go up and down.

Nobody knows when we’ll have another 2008 type of crash.

And when you don’t know when, you need a “system” to handle whatever happens.

You want a strategy that actually starts to zoom up and get better when markets get a little dicey. That’s where trend following comes in…

Another Dead Cat Bounce for Stocks?

And this idea is especially important now that markets are extra volatile.

When the stock market crashed in 2008, people who trusted the government and the Fed got killed.

Trend followers didn’t die. They made fortunes in October 2008.

In fact, take a look at how my proprietary system behaved in 2008. It triggered a sell signal in late 2007. 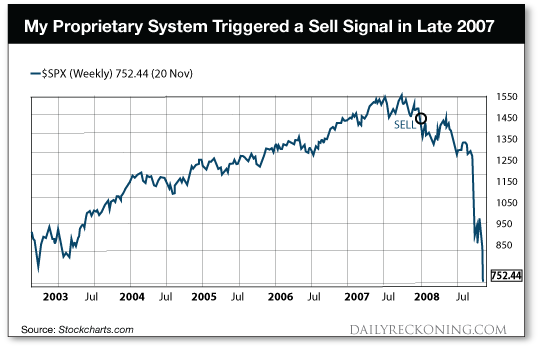 But that was just a dead cat bounce. Soon after, the market collapsed.

Because my system also triggered a sell signal in August of 2015, and it has remained in “sell mode” since then.

We’re also in the midst of a short-term stock market rally. Are we repeating the same pattern we saw in 2007? A dead cat bounce followed by a major crash?

Who the hell knows… It’s certainly a possibility.

All I know is I’m following the trend. And the long-term trend, according to my trend system, is down. That’s all we know. All we can do.

Following the trend is especially important in this era of central bank manipulation.

Who knows what these maniacs will do next?

They’re already talking about negative interest rates here in the US. And I have seen German officials actually talk about unlimited QE (say what?).

Am I saying to not trade given this Fed manipulation? No.

A government-manipulated market is still a market.

And we have to be in the markets, profiting from both up and down moves because there are so few options to make money. (Seen your savings account recently?)

Exactly, you have made no interest income for a decade.

So with all of this extracurricular government policy-making aimed at rigging markets to some unknown right level, trend following is the only sanity available.

Look, there is no telling what government will do to push stock markets to whatever level they feel is important.

Conversely, just as the government can push the stock market up, they can push it down. When will that happen? Nobody knows when that will happen.

But if you’re simply following the trend, you don’t need to know. You will be ready to profit, and protect yourself too.