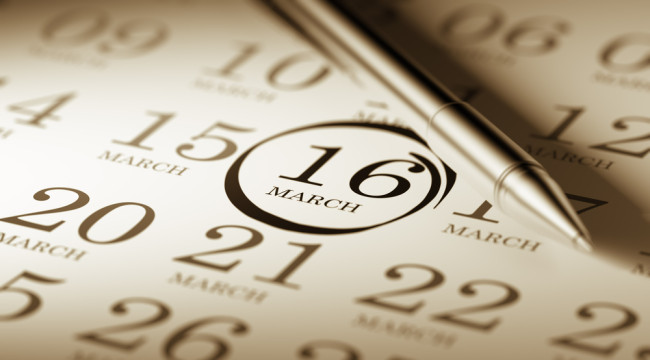 What to Do Ahead of Next Week's FOMC Meeting

The Federal Open Market Committee, FOMC, meets March 15–16 under Janet Yellen’s leadership to decide interest rate policy for the Federal Reserve System. The consensus of economists and the fed funds futures market is that the Fed will not raise rates. My view is that a rate hike is still on the table.

That’s a debate worth having, but the truth is it doesn’t matter. The U.S. economy, indeed the global economy is heading for a recession later this year. A rate hike or a pause by the Fed won’t change that. Fed policy may affect markets in the short run, and may affect the exact timing of the recession, but it can’t change the outcome. The economy is bigger than Fed policy, and it will have its way.

The argument for a rate hike is straightforward. Job creation remains strong, and labor force participation has begun to rise. Of course, wage growth is weak, and the jobs being created are not the type of high paying jobs needed to boost aggregate demand. Still jobs are better than no jobs, and Obama’s second term in office is on track to match the job creation prowess of the Reagan and Clinton years.

The Atlanta GDP “nowcast” shows first quarter GDP on track to grow 2.2%. That’s not great growth, but it’s in line with the growth trend since 2009. More importantly, it’s an improvement over a relatively weak 2015, and an especially weak fourth quarter of 2015.

Oil prices, and commodity prices seem to be off the bottom. Yellen has been ridiculed for her reliance on the word “transitory” to describe falling energy prices for the past 32 months. Still, nothing lasts forever, and if oil prices stabilize and then rise, inflation will not be far behind. Yellen has been insistent on the Fed’s need to stay ahead of price increases for the obvious reason the monetary policy works with significant lags.

This combination of unemployment at 4.9%, GDP growth at 2.2% (trending higher), and core inflation at 2.2% (trending higher) meets or exceeds the rate hike criteria laid out by Yellen in her speech in Providence, Rhode Island on May 22, 2013. That speech was her road map to liftoff, which occurred last December. It is still a good guide to how Yellen thinks about the need to normalize interest rates.

The case for doing nothing at the March FOMC meeting is equally neat. Stock markets were in turmoil from January 1, 2016 to Feb. 11, 2016 as a direct consequence of the Fed’s rate hike in December, and the prospect of a strong dollar hurting exports and overseas corporate earnings.

A host of other indicators point to a likely recession. World trade is contracting (a highly unusual circumstance almost always associated with recession or depression). Manufacturing indices in the U.S. are showing contraction.

(It is frequently said that manufacturing is a relatively small part of U.S. GDP. This ignores the difference between final value added (counted for GDP), and gross B2B sales in the entire supply chain (netted out for GDP). The gross sales figure is important for hiring and investment by individual firms in the supply chain even if they do not produce final sales. Also, manufacturing jobs are higher-paying on average than service jobs so a slowdown in manufacturing has a disproportionate impact on aggregate demand).

In any case, weakness in manufacturing is now having spillover effects in the service side of the U.S. economy.

Still, the Fed has never accurately forecast a recession. It’s not even clear that Fed models are capable of forecasting recessions because of their equilibrium-based assumptions about the impact of policy changes. While the Fed should not raise rates in a recession, they may raise them anyway because they don’t see it coming.

In a nutshell, those are the arguments for and against a rate hike. The rate hike camp sees inflation right around the corner due to tight labor markets. The no hike camp sees recession right around the corner due to the manufacturing slump and strong dollar. Ironically, both camps may be right. There is a name for rising inflation in a recession. It’s called “stagflation,” a condition last seen in the U.S. in the late 1970s.

Which brings me back to my original question. Does it matter if the Fed hikes rates or not?

A large body of evidence is now emerging that monetary policy today is ineffective at stimulating growth. When Ben Bernanke launched quantitative easing, QE, he relied on the “portfolio channel effect” (low-to-zero rates on safe investments would force investors into stocks and real estate), and the “wealth effect” (rising stock and real estate prices would spur spending).

This policy is now widely seen as a failure. The portfolio channel effect worked, but the wealth effect did not. (The reason for this is the collapsing velocity of money; a psychological phenomenon beyond the Fed’s competence to change.) The result is asset bubbles in stocks and real estate that Janet Yellen now navigates at her peril.

Likewise, negative interest rates do not work as advertised. The idea is that negative interest rates make saving unattractive. In turn, savers will spend rather than leave their money in the bank. Bankers will lend money rather than leave their money in excess reserves. The combination of lending and spending by banks, consumers, and businesses, all in response to negative rates was expected to stimulate economies that tried the policy.

In fact, negative rates send a signal that deflation is a real threat. Consumers respond by saving more (to make up for lost interest), and spending less (in anticipation of price declines in future). The result is more saving and less spending — the exact opposite of what the central banks want.

If monetary policy cannot stimulate the economy, and if the economy is heading toward a recession (for reasons beyond the Fed’s control), then sitting tight on March 16 will not prevent a recession.

In fact, most of the benefit of not raising rates in March is already priced in. The reality of no rate hike in March will not produce higher stock prices or a weaker dollar because those market moves have already happened in anticipation of no hike. We’ve had our ease already.

Of course, if Yellen does raise rates in March, that will produce a shock that will send stocks down, bonds up, and the dollar higher. In effect, stocks, bonds and currencies will rapidly reprice based on an unexpected policy move by the Fed.

The Fed may not care about this repricing. Today they are in the business of guiding the U.S. economy, not propping up stock markets. (Efforts at a wealth effect are long gone.)

The fact that stock markets have rallied smartly since mid-February has actually given the Fed a “cushion” to drive them back down again without reaching critical levels (say, S&P 1650) should they choose to raise rates. Such is the power of feedback loops between the Fed and the markets.

On the other hand, if the Fed raises rates at all, they may accelerate the very recession they most fear. Yet if they don’t raise rates now (to gain some ammunition) when will they raise rates? Perhaps never.

These countervailing forces and conflicting arguments make this week a good time to sell stocks. If the Fed does not hike rates, there’s not much upside left; it’s already priced in. A recession is coming regardless of what the Fed does. If the Fed does hike rates, stocks will violently reprice to the downside in a repeat of the January action (and last August).

Either way, stocks have had their fun. It’s time to sell, and reallocate to cash, bonds and gold. Then move to the sidelines, sit back, and watch the show.