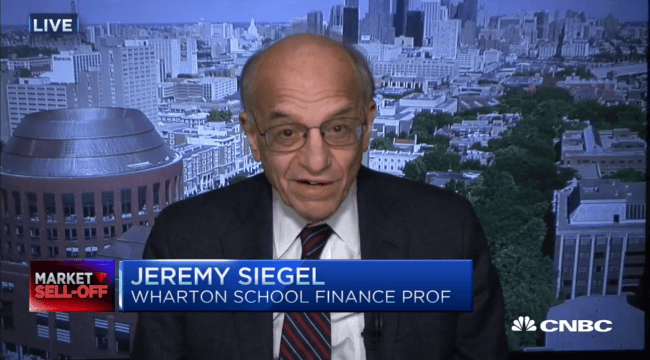 A Disturbing Video that Could Cost You a Lot of Money

I recently came across a CNBC video that made me chuckle…

Maybe you’ve seen it too…

And maybe you’re even following its advice (I hope not!)

If you read any of my books or listened to my podcast, you know I’m not a big fan of CNBC.

Their job is simple: To fill up the spaces in between advertisements.

The ads… that’s all they care about. They don’t care if you’ll make money or not.

Which is why most of the time they fill up the spaces in between ads with talking head garbage.

I recently watched a CNCB clip with Jeremy Siegel, Professor of Finance at the Wharton School of the University of Pennsylvania in Philadelphia.

I have nothing personal against him. I’m sure he has a very high IQ.

But when you show up on national TV telling everyone “I actually think we’re going to get 8 to 10% this year” in the stock market… you’ll get no respect from me.

First of all, where’s that number coming from?

He literally pulled that number out of his hat. We know he’s just making that up.

He also said “I don’t think [this year] is gonna be all that bad.”

What does that even mean?

Bernanke said the same thing in 2007. And he was the head of the Federal Reserve at the time.

This is just a professor at a University appearing on CNCBC.

And there’s absolutely nothing behind that. Let me prove it to you…

You may be familiar with Siegel. He wrote the famous book Stocks for the Long Run… a book that has been call “the buy and hold bible.”

And, as far as I know, he’s always bullish.

Meaning, he will never tell you to sell stocks.

Look what happened in 2000, at the peak of the dot.com bubble.

In a BusinessWeek interview in May 2000, when asked about the stock market, he replied:

"Seven percent per year [average] real returns on stocks is what I find over nearly two centuries. I don't see persuasive reasons why it should be any different from that over the intermediate run.”

Ok, so he basically said you can expect 7% a year in the intermediate run.

Well, look what happened to the NASDAQ after May 2000… 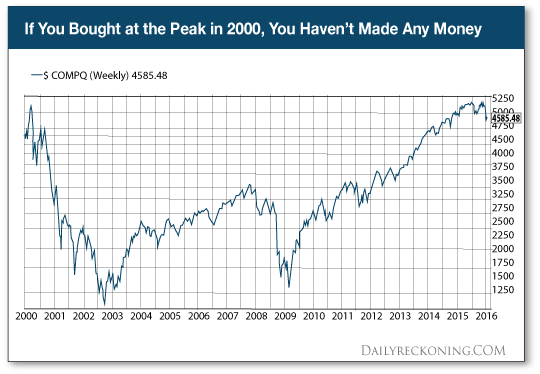 Does that look like a 7% annual return to you?

The NASDAQ composite index has gone nowhere in 16 years.

How is Mr. Siegel’s recent call of 8-10% annual return this year any different than the call he made in 2000?

If You’re Going to Swing at Me, Punch Harder Please

Despite this, lots of people still watch CNBC, hoping to get the next great stock market tip.

One of my readers, for example, complained:

“You trash CNBC and other people, but they provide very good information if you know how to use it. And you shouldn’t just trash everybody’s point of view because there are a lot of smarter people than you who have a better opinion.”

Punch harder please. Really get some shoulder into it if you are going to swing at me.

Here’s the truth: If you’re getting ready to retire, you can’t look at the stock market as an average.

You can’t look at historical data and say “well, stocks on average go up 7-8%, so that’s what we should expect this year.”

The stock market goes up and down. We could easily have another 50% crash. Maybe more.

Which is why you should have a strategy that can profit in that kind of environment.

That’s where trend following comes in.

It’s the only strategy with a long track record of making money in both up and down markets.

But what do you think? Am I being too harsh on this guy? Send me your thoughts at CovelUncensored@agorafinancial.com