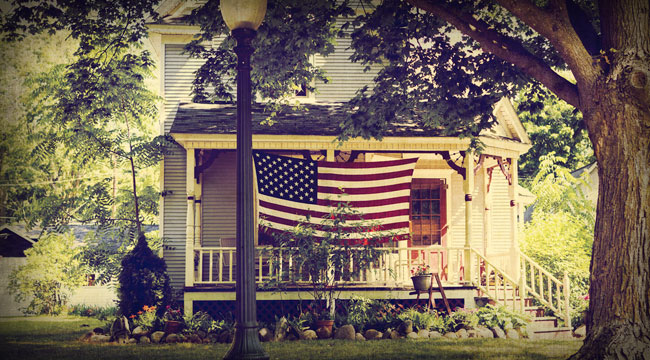 A Debate that Could Destroy Your Dream of Homeownership

Some people are saying it is just what the doctor ordered. Others are saying that the cure is worse than the disease.

The Affordable Care Act? Reengagement in Iraq? Tea Party bullying in the GOP?

Not this time. Just as protracted in the corridors of Congress and the White House is the debate over the proposed reform — and potential replacement — of the beleaguered Fannie Mae and Freddie Mac. And InsideSources has uncovered the involvement of a former Administration official, who appears to have been involved in the discussions that shaped part of the legislation that could offer a large upside to big banks.

Although it is less on the minds of Americans in the heartland, arguably no issue has more personal impact. The result of the debate will determine many of the winners and losers in the American dream of homeownership.

It is not merely families seeking their own backyard who will be affected. The titans of the banking industry also are keenly concerned about whether they will be warmed under the protective cover of government guarantees or be left out in the cold.

A key focal point in the debate is a bill sponsored by Senate Banking Committee Chairman Tim Johnson (D-SD) and ranking Republican Mike Crapo of Idaho. The Johnson-Crapo bill was voted out of committee and to the full Senate in May.

The Johnson-Crapo bill is built on the framework of legislation sponsored by Sen. Bob Corker (R-TN) and Mark Warner (D-VA). Both Johnson-Crapo and Corker-Warner would effectively wind down Fannie and Freddie, replacing them with a newly created Federal Mortgage Insurance Corporation (FMIC).

While the legislation ostensibly is designed to create a new and improved path to homeownership, its proponents don’t like to talk about who would primarily benefit from its approval: the big banks, the very entities that contributed to the housing collapse in the first place. In a classic example of the cozy ties that exist in Washington between regulators and the regulated, the legislation was shaped with strong input from a number of individuals with current or recent ties to the big banks and mortgage companies.

For example, Michael Bright, Corker’s senior financial adviser since 2010, previously was a mortgage trader for Countrywide Financial and Wachovia. The two firms figured prominently in the housing collapse.

Meanwhile, Fannie and Freddie investors are fighting the 2012 Third Amendment — the so-called “Sweep Amendment” — that allows the Treasury Department to seize all profits indefinitely. The restriction exists even beyond the satisfaction of Fannie and Freddie’s debt to taxpayers for the bailout.

…the legislation was shaped with strong input from a number of individuals with current or recent ties to the big banks and mortgage companies.

One of those who helped shape the amendment is Jim Parrott, a senior fellow at the Urban Institute and former senior advisor at the White House’s National Economic Council. Parrott has served as a consultant for major banks. InsideSources has obtained an email strongly suggesting that Parrott played an advisory role for at least one bank, Bank of America.

The email, written by a senior official at the bank, refers to a meeting with Parrott about housing finance reform. In the email, the official also asks about arranging a telephone call to provide details of the Parrott meeting.

Parrott declined to discuss his role with the banks or in the Sweep Amendment discussions when asked by InsideSources. He also chose to not comment on how his work with any banks would fit against the backdrop of the Administration’s internal rules intended to cover political appointees leaving the government.

The sweep maneuver raises even more questions about the specter of the influence of major banks on policies meant to serve the public interest. “I am not a lawyer and I don’t play one on TV,” says financial services analyst Josh Rosner. “But I do believe it seems like it was not something done solely by the conservator.”

Whatever the twists and turns, answers to the Fannie/Freddie dilemma do not appear to be coming anytime soon.

“Given the [political] climate and how complicated the contemplated makeover of the second-largest securities market in the world is, it will be many moons before reform legislation is passed,” says Jim Millstein, chairman and CEO of Millstein & Co. Until March 2011, Millstein was the chief restructuring officer at the U.S. Department of Treasury.

Prospects for the legislation actually making it to the Senate floor, let alone passing, are highly questionable. Opposition to the particulars of the proposals, even from those who support the concept in principle, is intense.

In testimony to the Senate Banking Committee this past November, Millstein cautioned at length against too hastily putting Fannie and Freddie to rest. He tells InsideSources:

“If the new first-loss capital hasn’t been raised in size on a timetable perfectly in sync with the five-year wind down of Fannie and Freddie imposed by Corker-Warner, there could be significant contraction in the availability of mortgage credit.

“Second, the wind down has the effect of orphaning all the outstanding Fannie and Freddie mortgage-backed securities, a $4.5 trillion credit market, prices in which form the basis off of which a variety of other instruments are priced and hedged.

“As a consequence, there could be significant dislocation in interest rates not only in the mortgage credit market but in the debt markets for a variety of mortgage-related entities (e.g., mortgage REITs).”

Critics of Johnson-Crapo say the bill would hand control of the nation’s $20 trillion mortgage market to the big banks while providing them with a full government backstop to protect against any potential losses. The legislation also comes at the expense of tens of thousands of investors who hold stock in Fannie and Freddie.

One outspoken critic is Rosner, managing director of Graham Fisher & Co. and co-author of Reckless Endangerment: How Outsized Ambition, Greed, and Corruption Led to Economic Armageddon (Times Books, 2011). The book targets the individuals who, the authors argue, played pivotal roles in the financial meltdown.

The government’s entire approach to Fannie and Freddie is misguided, Rosner tells InsideSources.

“Rather than label Fannie and Freddie as GSEs (government-sponsored enterprises), we should treat them as public utilities — much like water, electric and sewer — and regulate them properly,” he says. “We need to depoliticize these institutions.

“Public utilities exist to make sure the public interests are served,” he adds. “Instead, we have the banks licking their chops like Elmer Fudd does every time he sees Bugs Bunny. They’re hoping to capture not only the primary but the secondary market.”

Rosner would keep the basic structures of Fannie and Freddie intact either through conservatorship (allowing them to raise private capital to sufficient levels) or receivership (re-chartering replacement entities that look like the GSEs with proper regulatory structures.)

“You could call them Jimmy and Sue,” he says. “I don’t care. Just fix them and support the mission they were originally conceived to perform, to support adequate liquidity in the primary mortgage market.”

Which route would he take?

“I am agnostic,” he says. “I just think we need to recognize that Fannie and Freddie are not the problem. The problem is our failure to regulate them and to insure the separation of the primary and secondary markets.”

Millstein’s formula for fixing Fannie and Freddie, at least on an interim basis, is similar.

“They need to be allowed to build capital so as to allow them at a minimum to be able credibly to back the $4.5 trillion of securities of theirs that will remain outstanding for decades to come,” he says, “and to create a capital cushion between the underlying mortgages and the U.S. taxpayers who are on the hook for those mortgage-backed securities until they are retired.”

As the lobbying and posturing continue in the corridors, Rosner holds hope that changes in Senate leadership — he believes Richard Shelby (R-AL) and Sherrod Brown (D-Ohio) offer promise — could prompt a solution. “They both understand the issue, they are not terribly ideological about it, and they could work together.”

Besides, he says, “I am hoping that at some point rational thinking comes back into fashion.”

Richard Osborne
for The Daily Reckoning

Ed. Note: Fannie and Freddie might need the government to keep them from dying and fading away. But there’s currently one under-the-radar sector of the economy that doesn’t rely on government handouts… and it’s minting fortunes left and right. Readers of today’s FREE Laissez Faire Today email edition could have discovered a way to tap into that sector for huge gains. Sign up for Laissez Faire Today, for FREE, right here, and never miss another great opportunity like this.

Richard Osborne is a veteran business journalist who has been honored with dozens of regional, state and national journalism awards, including numerous awards for column writing and enterprise reporting. Among his awards, he received the John Hancock Award for Excellence in Business and Financial Journalism. The U.S. Small Business Administration named him Small Business Advocate of the Year in the Ohio media.