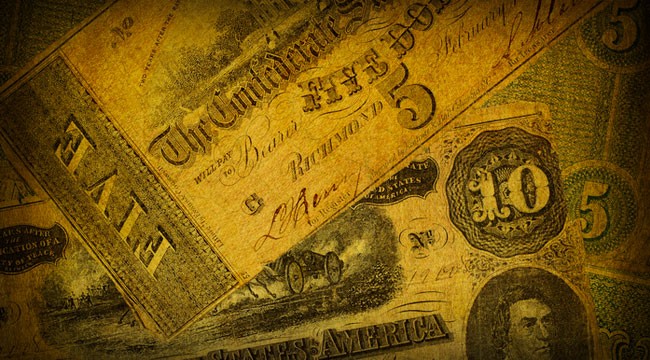 A Brief History of Currency Wars

Currency wars are one of the most important dynamics in the global financial system today.

But the real reason, the one that’s less talked about, is that countries actually want to import inflation. Take the United States for example. We have a trade deficit, not a surplus. If the dollar’s cheaper it may make our exports slightly more attractive.

It’s going to increase the price of the goods we buy — whether it’s manufactured good, textiles, electronics, etc. — and that inflation then feeds into the supply chain in the U.S. So, currency wars are actually a way of creating monetary ease and importing inflation

The problem is, once one country tries to cheapen their currency, another country cheapens its currency, and so on causing a race to the bottom.

Of course, I started talking about this year ago in my first book, Currency Wars. My point then is the same today: The world is not always in a currency war, but when we are, they can last for five or ten, fifteen and even twenty years. They can last for a very long time.

There have been three currency wars in the past one hundred years. Currency War I covered the period from 1921 to 1936. It really started with the Weimar hyperinflation. There was period of successive currency devaluation.

In 1921, Germany destroyed its currency. In 1925, France, Belgium and others did the same thing. What was going on at that time prior to World War I in 1914? For a long time before that, the world had been on what’s called the classical gold standard. If you had a balance of payments, your deficit, you paid for it in gold.

If you had a balance of payment surplus, you acquired gold. Gold was the regulator of expansion or contraction of individual economies. You had to be productive, pursue your comparative advantage and have a good business environment to actually get some gold in the system — or at least avoid losing the gold you had. It was a very stable system that promoted enormous growth and low inflation.

That system was torn up in 1914 because countries needed to print money to fight World War I. When World War I was over and the world entered the early 1920s, countries wanted to go back to the gold standard but they didn’t quite know how to do it. There was a conference in Genoa, Italy, in 1922 where the problem was discussed.

If you saw the Woody Allen movie Midnight in Paris, it shows U.S. expatriate living a very high lifestyle in France in mid-1920s. That was true because of the hyperinflation of France. It wasn’t as bad as the Weimar hyperinflation in Germany, but it was pretty bad. If you had a modest amount of dollars, you could go to France and live like a king.

The U.K. had the same decision to make but they made it differently than France did. There, instead of doubling the price of gold, they cut their money supply in half. They went back to the pre-World War I parity.

That was a decision made by Winston Churchill who was Chancellor of Exchequer at that time. It was extremely deflationary. The point is, when you’ve doubled the money supply, you might not like it but you did it and you have to own up to that and recognize that you’ve trashed your currency. Churchill felt duty-bound to live up to the old value.

He cut the money supply in half and that threw the U.K. into a depression three years ahead of the rest of the world. While the rest of the world ran into the depression in 1929, the U.K. it started in 1926. I mention that story because to go back to gold at a much higher price measured in sterling would have been the right way to do it. Choosing the wrong price was a contributor to the great depression.

Economists today say, “We could never have a gold standard. Don’t you know that the gold standard caused the great depression?”

I do know that — it was a contributor to the great depression, but it was not because of gold, it was because of the price. Churchill picked the wrong price and that was deflationary. The lesson of the 1920s is not that you can’t have a gold standard, but that a country needs to get the price right. They continued down that path until, finally, it was unbearable for the U.K., and they devalued in 1931. Soon after, the U.S. devalued in 1933. Then France and the U.K. devalued again in 1936. You had a period of successive currency devaluations and so-called “beggar-thy-neighbor” policies.

The result was, of course, one of the worst depressions in world history. There was skyrocketing unemployment and crushed industrial production that created a long period of very weak to negative growth. Currency War I was not resolved until World War II and then, finally, at the Bretton Woods conference.

That’s when the world was put on a new monetary standard. Currency War II raged from 1967 to 1987. The seminal event in the middle of this war was Nixon’s taking the U.S., and ultimately the world, off the gold standard on August 15, 1971.

He did this to create jobs and promote exports to help the U.S. economy. What actually happened instead? We had three recessions back to back, in 1974, 1979 and 1980.

Our stock market crashed in 1974. Unemployment skyrocketed, inflation flew out of control between 1977 and 1981 (U.S. inflation in that five-year period was 50%) and the value of the dollar was cut in half.

Again, the lesson of currency wars is that they don’t produce the results you expect which are increased exports and jobs and some growth. What they produce is extreme deflation, extreme inflation, recession, depression or economic catastrophe. This brings us to Currency War Three, which began in 2010.

That was the age of what we call “King dollar” or the “strong dollar” policy. It was a period of very good growth, very good price stability and good economic performance around the world. It was not a gold standard system nor was it rules-based.

The Fed did look at the price of gold as a thermometer to see how they were doing. Basically, what the United States said to the world is, “We’re not on a gold standard, we’re on a dollar standard.

We, the United States, agree to maintain the purchasing power of the dollar and, you, our trading partners, can link to the dollar or plan your economies around some peg to the dollar. That will give us a stable system.” That actually worked up until 2010 when the U.S. tore up the deal and basically declared Currency War III. President Obama did this in his State of the Union address in January 2010.

Here we are and they’re still continuing. That comes as no surprise to me.

A lot of journalists will see, say, the weak yen, and they’ll say, “Oh, my goodness. We’re in a currency war.” And I’ll say, “Well, of course we are. We’ve been in one for five years. And we’ll probably be in one for five more years, even longer.”