“In every major conflict in which the U.S. has been involved in the past 25 years, this has been the first weapon to rain down out of the sky onto primary targets.”

Several weeks ago, I attended a behind-closed-doors display of some of the awesome new technology the Defense Department is buying these days, where I heard the quote above from an insider in the world of defense. I got in the door with my retired Navy credentials — this party wasn’t for anyone.

And that’s no surprise, considering the secretive and highly profitable nature of what I saw.

Sometimes in life, you have to “be there.” Sometimes, you can only “be there” if they’ll let you in the front door. These points were never truer than at the recent, closed to the public meeting just outside of Washington, D.C., where defense industry and government reps met to discuss issues, needs, programs and much else.

To attend, you need to have a military-government-contractor connection. The public wasn’t invited. But I’m an old Navy Salt with over three decades in the Sea Service in my logbook, active and reserve. Been there; done that; and I still belong to Navy- and defense-related organizations.

I met with reps from defense contractors included the biggest of big names — Boeing (BA: NYSE), Lockheed Martin (LMT: NYSE), Northrop Grumman (NOC: NYSE), and many more, all good investments in themselves. Company reps were approachable, willing to answer questions, go into details and talk nitty-gritty with an old salt.

Suffice to say, this behind closed doors meeting was worth the trip. Today I want to share one of the hottest techs I saw there; it’s amazing, really…

If you asked me to name the most important technologies in national defense today, few come to mind before the Tomahawk cruise missile, made by Raytheon (RTN: NYSE).

Now, I’m not hawk, but I’ve studied our adversaries, past and present. I was trained to hunt and destroy Soviet submarines and I was in briefly in the sand during Gulf War I. The option isn’t to be prepared for war or not — it’s a matter too important to be left to chance.

Which is why the Defense Department put it in the capable hands of Raytheon! As my meeting contact said above, this is our go-to option when conflict is unavoidable. And I saw this tech with my own eyes. I was there.

At SAS, Raytheon reps gave a comprehensive update on state-of-the-art advances regarding the Tomahawk, and wow… this is not the developmental version that I saw tested offshore California as a young naval officer, way back in the early 1980s. 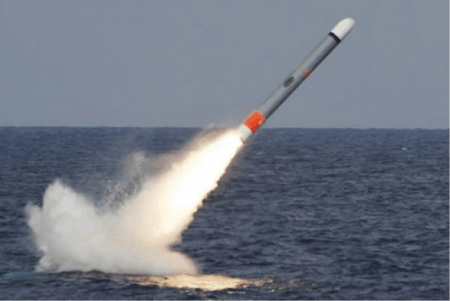 Today’s Tomahawk is sleek, aerodynamic, long-range, “hard to see” on radar (if you know what I mean) and packs a 1,000 pound explosive punch. Even better, it’s basically a “wooden round” — not meaning it’s made out of wood, but it comes pre-packed into its launch canister, and then sails around on ships and inside submarines, awaiting programming and final firing command.

Tomahawk can pop from a submarine launch tube or “payload module” underwater (see above photo), or blast into the sky from the deck of a ship; then its turbofan engine kicks in and burns JP-10 fuel (same as the glorious SR-71 aircraft), as the missile zooms on its way to targets near and far. 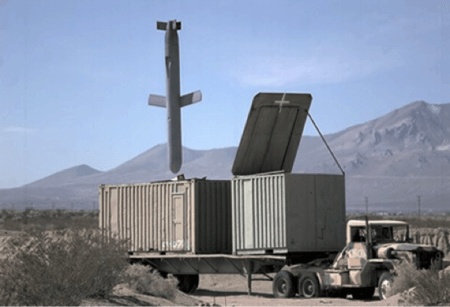 Tomahawk is perfect for taking out fixed targets with ungodly accuracy — bringing home the late Senator Barry Goldwater’s quip about “lobbing one into the men’s room” of a certain building. More recently, the Navy and Raytheon figured out how to reprogram the missile in-flight, such that Tomahawk can (and has) hit a maneuvering target at sea.

Tomahawk is the “Transformer” of modern weapons, so to speak. It’s a mature, well-tested, highly evolved, very intelligent weapon. Recent advances give Tomahawk the ability to find its own targets with a seeker; and it’ll soon carry a new, multi-mission, “multi-effects” warhead with the ability to burrow down into buried bunkers, if that sort of military requirement rings any bells.

There’s always politics, of course. Budget people want to lower Tomahawk funding over the next two years; typical — take a program that works superbly well, and cut the budget. Yet Tomahawk has staunch defenders in the Navy and on Capitol Hill.

Long term, there’s just no substitute, so it comes down to whether or not you think that the U.S. “might” get into future conflicts over time — or “might” want to deter them with weapons that are better than the adversary’s. I think Congress will come around soon.

Then you can bet Raytheon will sell more Tomahawks, and service the ones in inventory. This weapon is just one reason, out of many, why Raytheon is well-positioned to deliver gains and dividends to the long-term investor.

In all the pundits’ talk about the S&P and the Nasdaq, the high-tech, big-money companies that protect our nation rarely get mentioned at all. But everybody knows that the U.S. government is spending a lot of money on defense these days. And what’s the old saying? Follow the money!

That’s how much money the Department of Defense requested in the last fiscal year to meet the nation’s urgent defense commitments. And the lion’s share of this funding will go to publicly-traded companies you’ve probably never heard of.

Which gets us to my key point — if you haven’t been investing in companies that develop cutting edge mil-tech, you’ve been missing out!

Ron Paul explains how neocons will weaken our country and our military by promoting more war, and why the best way to “rebuild” the military is to restore its mission of defending the United States, not Washington’s overseas empire…