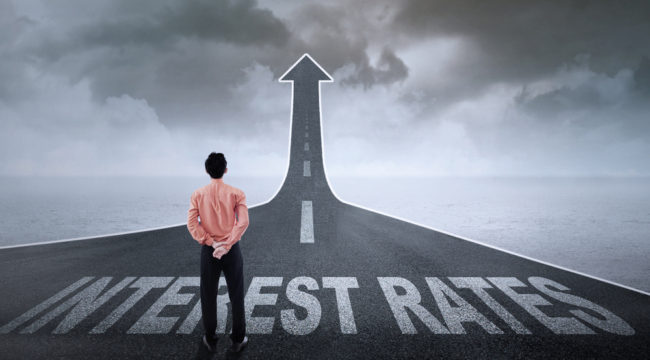 John Hussman honchos the Hussman family of funds. He soothsaid the 2008–09 collapse in advance, way ahead of the crowd. And now, heading into 2017, he sees ill omens ahead…

Market consensus — a seductive yet treacherous siren — says Trump’s big spending will keep stocks in what David Stockman calls the “nosebleed section.” Hussman dissents. The post-election stock rally rests upon stilts, and the stilts upon sand. Stocks are overvalued, says he.

Another portent: Interest rates are set to rise (Fed funds futures are suggesting a 92% chance of a rate hike next week).

Bond yields have spiked in expectation that Trump’s spending plans will finally goose inflation. The yield on the 10-year Treasury note is currently 2.37% — which starts to flirt with danger as far as stocks go. And lame duck Yellen will likely raise rates, as indicated.

As Goldman explained recently, “A rise in U.S. bond yields above 2.75% would create a more serious problem for equity markets.” It says a 3% rate would spell a 10% correction on the S&P.

Combine the bullishness with the rate hikes and it’s got this Hussman fellow flopping sweat, his eyes abulge and his pulse running to 3/4 time. That’s because current conditions rhyme with conditions leading up to three previous episodes — all nasty:

The present combination of overvalued, overbought, overbullish conditions, coupled with rising interest rates… [is a] combination that has most often been associated not only with emerging bear markets but with market crashes…

It is one that most closely resembles only three other points in the postwar period; the first in early October 1987… the second in January 2000, and the most recent in July 2015 (the S&P 500 lost 12% over the next six weeks).

Refresher: The Dow plunged 22% on Oct. 19, 1987 — “Black Monday.” The tech bubble started to burst in March 2000. Almost forgotten is last July’s episode Hussman mentions. At 12%, it met the definition of a correction — a 10% market drop. A repeat performance would drop today’s S&P 265 points in a New York minute.

Hussman says the greatest danger is nonchalance. The biggest crashes occur not when everyone expects them… but when they don’t. Markets can chug along, merry as a grig, gaining a few points here, a few points there, no major swings. Even when the warning flags are flying, stocks can still creep higher. That provides the illusion of stability. And an illusion it is, says Hussman:

In any given week, the single most likely market outcome is actually a small gain, even though the average outcome is negative… Simply put, don’t be lulled into complacency by thinking that severely hostile market conditions have to resolve into immediate market losses. That’s not the way these environments work, and they never have.

Rather… present conditions actually [mean] that investors should expect a greater tendency toward small market gains than market conditions might otherwise lead them to expect, punctuated — with no warning at all — by wicked vertical losses that wipe out weeks or months of market gains in a handful of sessions.

It’s like a prizefighter lulling his opponent asleep with predictability — before putting him to sleep for real with a savage uppercut. The guy never sees it. More:

Every market crash in history has been associated with essentially the same [pattern.] It’s the positive “mode” that creates complacency… and it’s the fat left tail that strikes out of nowhere.

The “fat left tail” being a reference to the standard bell curve distribution pattern. A “fat tail” event means it’s way out on either end of the bell curve — highly unlikely. A fat right tail event is winning the Powerball. A fat left tail event is a piano falling on your head. Hussman’s warning about the piano, and that’s where those “wicked vertical losses” enter the scene.

In October, we reckoned about fat tail events. The conclusion: They strike markets significantly more often the laws of chance would suggest: “[Markets] operate in the world of fat tails, exhibiting large skewness… This is a fancy way of saying extreme events are much more likely to occur than a normal distribution would predict.”

Just so. And in a year when the Cubs won the World Series and Donald Trump won the White House, extreme events are starting to seem downright common.