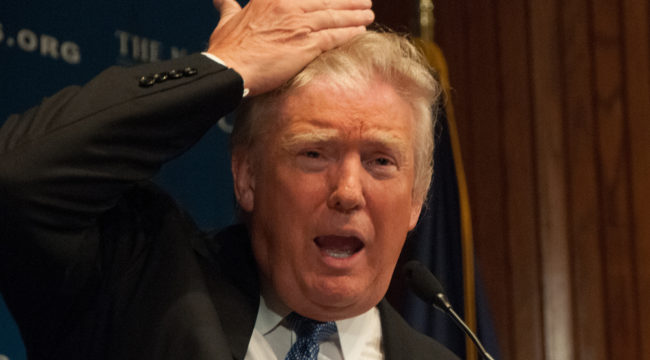 Editor’s note:In observance of Memorial Day, we will not be publishing Covel Uncensored on Monday, May 30. We hope you enjoy the holiday!

In an interview with the Guardian, Rubio was asked why he dropped out of the race…

He responded by comparing his campaign to a “really strong building” that was hit by a “category 5 hurricane.”

And that hurricane was Donald Trump.

Political scientists will be studying it for decades.

But investors should be paying close attention too.

Don’t believe what anyone says. Nobody saw Trump coming. His odds of becoming the Republican nominee were 80-1.

But yesterday, he reached the number of delegates needed to clinch the nomination.

Why were so many so wrong about Trump?

Well, the world is filled with know-it-alls who have the same fatal flaw.

They think they have the ability to somehow corral the innumerable variables in our universe into a model or system that will give them the ability to magically see into the future.

But reality is far too complicated for that. And those many variables always come together in a way nobody expects.

That’s what happened this year when Category 5 Hurricane Trump formed.

In his case, crony capitalism run amok, reckless D.C. spending, and political correctness came together to form a perfect storm of voter anger that Trump rode to victory.

Because our world is dominated by complexity.

And no one, no matter how big their ego, can possibly know or understand all that happens within it… much less what all those variables will produce when they come together.

Many have tried. And many have failed.

Which is why staking your financial future on the forecasts of “clairvoyant” types is a dangerous game.

It’s a game that the world’s most successful trend following traders never play.

And neither should you.

My Conversation With Jim Rickards

Jim Rickards knows a lot about complexity and world-altering events.

I spoke with Jim on my podcast. He’s a fascinating guy.

Jim’s the author of the bestsellers Currency Wars and The Death of Money. He was also general counsel of Long Term Capital Management when it famously went belly up in 1998. And he’s served as a high-level adviser to the Department of Defense and the U. S. intelligence community.

And he gives an insider’s account of the earth-shattering crises of the past 20 years that not many can.

Click here to listen to my conversation with Jim Rickards.

Please send me your comments to coveluncensored@agorafinancial.com. Let me know what you think of my talk with Jim.

P.S. Jim Rickards has just released a new report on how to make money from gold. If you have any interest in the metal and gold miners, you should check it out. According to Rickards, this could be a great opportunity to make a fortune from the yellow metal. Click here for more details.