461% in One Year? It's Possible With This Market Anomaly

Since Tesla Motors announced it was buying SolarCity for $2.7 billion in June, its stock price has been crushed…

Tesla shares are down nearly 7% since.

Some argue that it will alter Tesla’s business plans to expand production of its all-electric vehicles.

Others claim it merely amounts to a Tesla bailout of heavily indebted SolarCity.

The bottom line is the proposed deal has caused Wall Street to make massive bets against Tesla’s shares.

And that means the stock may be poised to shoot higher…

Tesla has been down this road before…

In 2012, the company was burning through cash and missing production targets. And investors were making big bets against it.

At the time, Tesla Motors founder and CEO Elon Musk warned that anyone betting against his company would experience a “tsunami of hurt.” And he was right…

During the following 12 months, Tesla’s stock price increased by 461%. 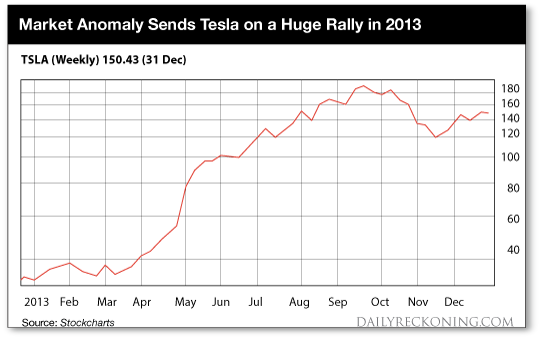 That’s what we call a trend following dream. You didn’t need to know anything about Tesla. All you had to do was follow the price action.

People who bet against Tesla’s shares back then got crushed after the company reported the good news of its first quarterly profit in Q1 2013.

When sentiment against a stock is that strong, all it takes is one catalyst to ignite a massive rally in the opposite direction.

Investors who are betting against a company will lose money if the stock moves higher.

And if the price keeps rising, they’ll soon have to make a choice…

They’ll have to decide: “Should I keep losing money betting against the trend or should I join the uptrend?”

In many occasions, they decide to join the uptrend.

They go from betting against the stock to buying shares.

When that happens, it creates a market anomaly that sends shares straight up.

And that’s what happened with Tesla in 2013.

Look, investors relying on “fundamentals” can make an airtight case that Tesla shares have nowhere to go but down. But as history has proven, that doesn’t mean they will.

The key thing to remember is that when too many people are betting on a stock’s decline, you can often be prepared for it to shoot higher.

All you need is a catalyst to change the sentiment…

And boom… you get a huge parabolic move.

These moves are so powerful that six months ago I started developing a new trading system to take advantage of this market anomaly.

I’m not ready to reveal the full details yet. But I can tell you this could be the most profitable system I’ve ever developed.