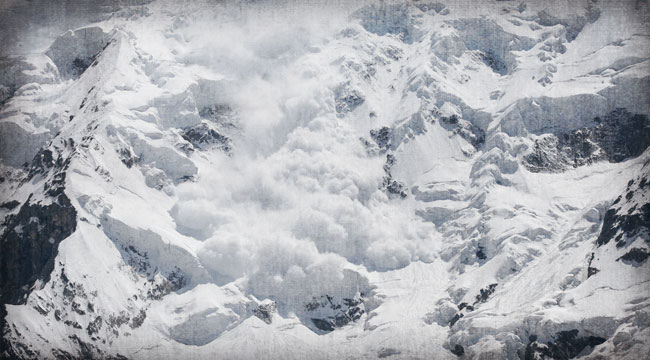 3 "Snowflakes" that Could Trigger Financial Collapse

Editor’s Note: “Don’t look for snowflakes,” our friend Jim Rickards has told us. “Watch out for the avalanche.”

As you probably recall, Mr. Rickards anticipates a financial crisis worse than 2008. The possible catalysts are many, but the outcome is certain. The analogy he makes in his book The Death of Money is to an avalanche: “The climbers and skiers at risk can never know when an avalanche will start or which snowflake will cause it.”

Still, it’s hard to resist wondering which snowflake will be the trigger. Below, Jim looks at three of the most likely possibilities, in his own words…

3 “Snowflakes” that Could Trigger the Financial Collapse
By Jim Rickards

Perhaps you read the papers every day, and wonder, “What should I look out for?

I’ll give you three. All of which are likely, in my view. These are not farfetched…

People don’t throw gold to the bottom of the sea… They hoard it.

Credit Crisis in China: China, believe it or not, is in more of a credit bubble than the United States. The United States has got lots and lots of problems. But China is actually worse — probably because they haven’t been through this as many times as we have.

I think they’re a little naïve about how bad this can get. They’re over relying on the ability of Communist Party officials to keep a lid on it. I was out in the countryside south of Nanjing not too long ago, visiting some of these ghost cities. I was with some Communist Party officials and provincial officials who were behind it all. Everything I saw, construction as far as the eye can see, magnificent stuff, all empty. The stuff you’ve seen on TV, I’ve actually been out there and seen it firsthand.

I turned to these guys and I said, “This is all debt finance. This is all empty, so you have no revenue to pay the debt. So how are you gonna pay the debt?” And the guy said, “Oh, we can’t.” But Beijing’s gonna bail us out.” That’s what he said. So it wasn’t even like this is something that might happen. That was, well, that’s definitely gonna happen.

But Beijing has their own problems, so whether it’s wealth management products, shadow banking, real estate finance, crony capitalism of the worst kind, flight capital, oligarchs taking all they can like pigs at the trough and then funneling it out to Vancouver and Australia and Park Avenue, etc… and all of this going on on a massive, massive scale… this is going to collapse. And they’re not really ready for it, and they don’t really know how to deal with it.

Failure to deliver gold: I think this is almost definitely coming. So much of the gold market is “paper gold.” So much of it is manipulation, and we no longer have to speculate about the manipulation. It’s very well documented. But it all rests on some physical gold. I describe the market as an inverted period with a little bit of gold at the bottom and a big inverted pyramid of paper gold resting on that little physical gold. 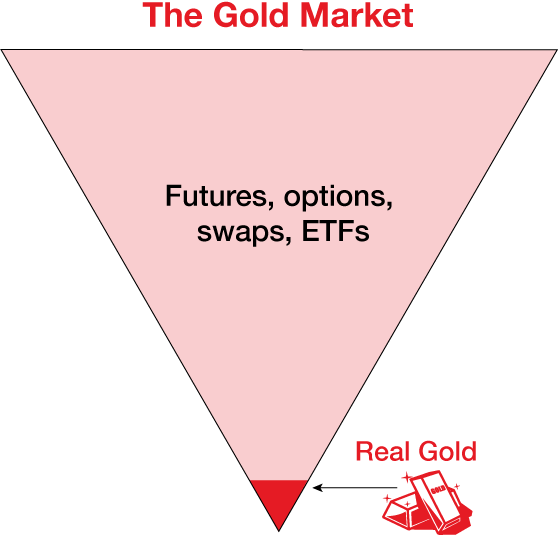 The [available amount of] physical gold is getting smaller. You would say, “Gee, there’s 2,000 tons of mining output per year, and the gold that exists doesn’t go anywhere, so why isn’t that little brick getting bigger instead of smaller?” And the answer is you have to distinguish between the total supply and the “floating supply.” The total supply gets bigger every year by about 2,000 tons. People don’t throw gold to the bottom of the sea. They don’t blow it up with explosives. They hoard it. And so all that gold’s still around, and new gold keeps coming into the system.

When you take gold from the GLD warehouse and put it in Shanghai, there’s no impact on the total supply, but you have shrunk the floating supply. I’ve seen this firsthand. I was in Switzerland not long ago, and I met with Via Mat, which is one of the big four “secure logistics” firms in the world. These are the guys that handle physical metal.

They’re building vaults as fast as they can. They’re negotiating with the Swiss Army. Over the years, the army’s hollowed out some of these mountains in the Alps and built these extensive warehouses and storage facilities and tunnels that will withstand nuclear attack. But they’re getting to the point where they don’t think they need as many. So vault guys are in negotiation to lease the mountains — these nuclear bomb-proof mountains — from the army. He said, “We’re building vault space as fast as we can. But we’re running out of capacity.”

So then you say, “Well, how bad can get it get?” Well, stay tuned. It can get worse.

I said, “Where’s the gold coming from?”

He said, “Well, UBS and Deutsche Bank and Credit Suisse, and customers are taking it out of the banks and giving it to us. ” Now there’s another example where the total supply is unchanged, but I’ve now reduced the floating supply because Via Mat is not doing anything with it.

They watch it for you. They keep it. UBS, on the other hand, is taking my gold and selling it 10 times over as unallocated gold on a [London Bullion Market Association] forward contract.

So how does this end? Someday, probably sooner than later, somebody is going to show up and say, “I want my gold, please,” and the custodian won’t be able to give it to them. What if a major institution like John Paulson’s hedge fund [prompted] a failure to deliver by a major dealer like HSBC or JPMorgan? That would be a shock wave. It would set off panic buying in gold, and inflation expectations would get out of control.

I make the point that a snowflake can cause an avalanche. But not every snowflake does. So a lot of snowflakes fall harmlessly, except that they make the ultimate avalanche worse because they’re building up the snowpack. But one of them hits the wrong way and starts something and it spins out of control. And so sometimes people just have this idea that all these things are little things and we’re waiting for the big thing. And that’s actually not good science.

The way to think about it is the big thing might not look that different from the little things. It’s just that it hit the system the wrong way. Got you on a bad day. The straw that breaks the camel’s back is no different from all the other straws. It’s just that he was at the tipping point, and one piece of straw broke the camel. One snowflake started the avalanche.

So the thing that causes it might not be that different than the stuff we’ve seen, except that the system is getting more and more unstable, and it might not take that much. So with that said, an outright Russian invasion of Ukraine, I mean, that’s kind of been discounted. I think people would be surprised if Putin doesn’t invade eastern Ukraine at this point. And people would be surprised if the Islamic State doesn’t kick the Kurds all the way back to [the regional capital of] Erbil.

So then you say, “Well, how bad can get it get?” Well, stay tuned. It can get worse. So I would give you those three: Chinese credit collapse, failure to deliver gold, and the geopolitical shock. And any one of them could start this cascade that I’ve described.

Ed. Note: In the coming weeks, we’re going to unveil a new project we’ve been building with Mr. Rickards. It will deliver regular communication about how to navigate the coming crisis and come out on the other end intact… or even more prosperous than you were going in. Readers of The Daily Reckoning email edition will be offered access to it as soon as the curtain is lifted. Be among the first to gain access for yourself. Sign up for the FREE Daily Reckoning email edition, right here.