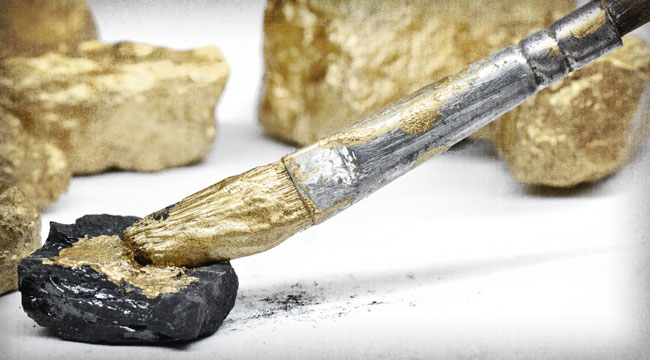 Greetings from Maine! Right now, I’m writing from within foghorn distance of the sea. And this gives me an opportunity to tell you a down east tale that should serve as a warning to every investor: Maine’s Great Gold Swindle.

I’m not talking about central banks, or manipulation of today’s markets. I’m talking about something from Maine’s history that proves the old lesson, “When something looks too good to be true, it is!”

Every enormous dollop of humbug is wrapped around a kernel of truth. And the fact is, there is gold in Maine. Gold is found in Maine’s bedrock, in sediments that were eroded by glaciers and in stream deposits. Significant gold discoveries were made in the towns of Acton and Madrid. And there were smaller finds around the state.

Jernegan was also a born salesman… As the old timers in Maine say, “He could sell a werewolf a flea collar.”

But in 1898, two men showed up in Lubec, Maine: Rev. Prescott F. Jernegan and his boyhood friend, Charles E. Fisher. They claimed an astounding way to find gold in Maine: They would harvest the yellow metal from seawater.

Lubec is the easternmost town in the U.S., way up near the Canadian border. Jernegan explained to credulous investors that Lubec was the perfect site for what he described as a “Klondike factory” because its position on the Passamaquoddy Bay gave it exposure to the huge rise and fall of the tides.

The official name of the company was the Electrolytic Marine Salts Company, or EMS. Jernegan and Fisher sold their “secret formula” to their new company in exchange for 45% of sales of company stock. According to Jernegan, the formula was the end result of over 200 experiments using electricity and chemistry.

Both Jernegan and Fisher came from respected Martha’s Vineyard families.

Jernegan was a Baptist minister. His workmen were required to participate in regular Sunday prayer services.

EMS poured money into the project, installing the town’s first telephone and electric systems. The company even paid for half the cost of a new steel bridge. The bridge would be used for hauling away the tons of gold EMS would harvest.

Jernegan was also a born salesman, with impressive communication skills. As the old timers in Maine say, “He could sell a werewolf a flea collar.”

Still, why did people believe him? Well, there IS gold in seawater. It is in very low concentrations — about one to two parts per 10 billion. Jernegan and Fisher said their revolutionary process could get around that.

Curious would-be investors came to Lubec. Jernegan led them down some stairs and into a room beneath a wharf. There they saw 250 boxes, each containing a battery, some mercury, and a secret recipe of chemicals that would make Colonel Sanders green with envy.

These boxes, called “accumulators,” were then lowered deep, deep into the tide-churned salt water. Visitors saw the boxes go down. And they saw other boxes brought up after a 24-hour accumulation period. Cracked open like clams, the boxes revealed their treasure — small but valuable deposits of gold and silver.

Jernegan was doing all the hard work of selling, right? So what did Fischer have to do with the scheme? Fischer had a special skill of his own… one that very few knew about. He was a trained deep-sea diver!

In other words, Fisher could descend through the inky depths of the nighttime sea and put gold in the accumulator boxes!

As one local folklorist recalls, “The next day when it was low tide, they’d take these accumulators out and low and behold, there was gold!”

On May 11, 1898, a local newspaper reported: “Nine shipments have been made from the works of the Electrolytic Marine Salts Mining Co. of East Lubec to date. They are said to have averaged about $1,000 apiece in value.”

By the end of May, the locals — many of whom now had jobs at EMS — were won over. The Lubec Herald gave Jernegan and Fisher a ringing endorsement, saying, “We believe that time will prove these gentlemen of the EMS Co. to be staunch friends and people who will take a warm interest in the town.”

Locals pressed their hard-earned cash on Jernegan and Fisher, eager to get in on the initial offering of EMS shares. But that local Lubec money was small potatoes for the EMS boys. They aimed to hook the big-money speculators.

And man, did they land some whales!

EMS stock was offered at $1 per share. The first offering of 350,000 shares sold out in three days. By July, 2.4 million shares had been sold to investors all over the East Coast, as 800 workers raced to put the finishing touches on Plant Number One.

In July, Fisher left on business. A few days later, locals noticed that Jernegan was also missing. Concerned, some workers went to his home, where they found the entire family had vanished, taking their furniture with them. Mysteriously, all of the company books and ledgers had disappeared as well.

Conventional wisdom is no path to real wealth.

Warrants for Jernegan and Fisher were quickly issued, but both men had fled the country, their bags stuffed with cash. One Lubec local described the affair as “the biggest swindling scheme we ever had in Maine.”

Fisher was never seen again, but most reports suggest he died in Australia. Jernegan was discovered living in France.

Upon discovery, Jernegan insisted he was trying to locate Fisher, “the real culprit.” The paperwork for Jernegan’s arrest warrant didn’t come through in time for French authorities to arrest him, and he slipped away, reportedly to the Philippines.

The defunct EMS Plant Number One was later converted into a sardine factory. And guess what? The sardine harvest brought more wealth to Lubec than the gold scheme ever promised to!

I think we can take three important lessons from this story…

1. Always do your homework. That’s why I crunch the numbers on companies I recommend, and fly hither and yon to check out the promising ones in person.

2. Don’t get caught up in hype. Conventional wisdom is no path to real wealth. In fact, it can often work to your advantage to sell when others are buying.

3. Watch what the insiders are doing. Are they buying or selling? Are they experts in their field or just salesmen with slick haircuts and a song-and-dance? Putting your money to work with people who really know what they are doing is one way to stay ahead of the crowd.

All the best from the road in Maine,

Sean Brodrick
for The Daily Reckoning

Ed. Note: The easiest way to avoid scams like this one is to take control of your precious metal purchases right away, and not rely on others to store them for you. Readers of today’s  issue of Laissez Faire Today discovered a revolutionary way to purchase, store, and use gold in your everyday life. Don’t miss out on any future opportunities like this. Sign up for the Laissez Faire Today e-letter, for FREE, right here.

Sean Brodrick is the “Indiana Jones” of natural resources. He’s a sharp analyst with intense boots-on-the-ground experience. He’s traveled from diamond fields north of the Arctic Circle to an ancient city of silver (and mummies) in Mexico to a gold project on the frigid southern tip of Argentina – and just about everywhere in between.