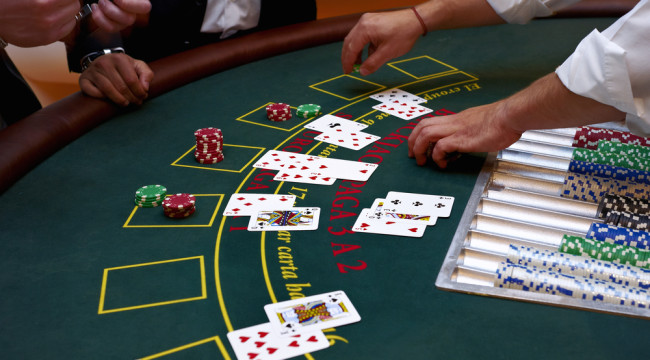 A few years ago, I met Jason, a former member of the Massachusetts Institute of Technology (MIT) Blackjack Team.

He’s featured in the book Bringing Down the House and the movie 21.

If you’re unfamiliar with the story, the students on the MIT Blackjack Team used blackjack card counting techniques to beat casinos worldwide.

When I sat down with Jason over sushi overlooking the Pacific Ocean, he told me how his team used precise rules to gain a mathematical edge against the world’s most famous casinos.

Using these rules, they knew when to hit and when to stand.

What happens if you apply those principles to your investments?

Could you beat the market, just like the MIT Blackjack Team was able to beat casinos?

And could you walk away with a small fortune?

How to Get an Edge on the Markets

Blackjack and poker are the only gambling games not determined by chance alone.

This means the shrewd player can influence the outcome by counting cards and using a “system.”

The truth is most people go to casinos for the thrill, the fantasy of fast riches, not to make money. These gambling zombies create chances for the rational gambler, the one using a disciplined system.

This means you should put the odds on your side and bet properly your hard-earned capital every freaking time. The same attitude goes for trading.

You can’t predict markets, just like the MIT team couldn’t predict the next cards dealt.

But you can have a system for every situation. That’s what gave the MIT team an edge. They thought in terms of probability.

And this philosophy is central to my trend following trading system. Follow the rules of the system and you’ll have an edge.

Of course, not all trades will be winners. We don’t expect that. But from a probabilistic standpoint, system strategies pay off big over time.

In Charles Duhigg’s new book, Smarter, Faster, Better, he shows that great achievers think about the future as probability streams.

And he uses professional poker player Annie Duke as the perfect example.

Here’s an excerpt from the book (emphasis mine):

When Annie started playing poker seriously, it was her brother [Howard] who sat her down and explained what separated the winners from everyone else.

Losers, Howard said, are always looking for certainty at the table. Winners are comfortable admitting to themselves what they don’t know.

When Annie would call Howard and complain that she had lost and had suffered badluck, or that the cards had gone against her, he would tell her to stop whining: “Have you considered that you might be the idiot at the table who’s looking for certainty?”

She is aware there’s a lot she can’t predict. But if she played this same hand one hundred times, she would probably end up $1,000 richer. So the expert makes the bet and stays in the game. She knows, from a probabilistic standpoint, it will pay off over time.

It doesn’t matter that this hand is uncertain. What matters is committing to odds that pay off in the long run. “Most players are obsessed with finding the certainty on the table, and it colors their choices,” Annie’s brother told her. “Being a great player means embracing uncertainty. As long as you’re okay with uncertainty, you can make the odds work for you.”

How did it all work out?

Annie won the 2004 World Series of Poker Tournament of Champions and the National Heads-Up Poker Championship in 2010.

She became a poker champion because she accepted the reality of uncertainty and understood how to think in terms of probabilities.

If you want to become a great investor, a great trend following investor, you must do the same as Annie.

This is such an important concept that I recently had Annie on my podcast.

Whether you play poker or not, I think you’ll enjoy this provocative conversation. In this episode, you’ll learn:

Click here to listen to my conversation with Annie Duke.

Please send me your comments to coveluncensored@agorafinancial.com. I want to know what you think.

Here’s Who Made a Killing From The “Trump Panic”…

Michael Covel reveals how one group of savvy investors played Trump’s shocking victory for profit. Plus, he breaks down the real story behind Trump’s triumph on Trend Following Radio…