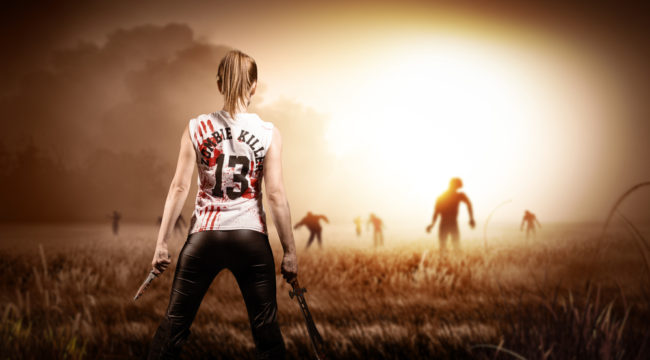 Did you ever notice how dinnertime conversation always seems to get around to somebody asking you for money? Or they want you to spend some of your Precious Mogambo Time (PMT) with them, “doing” something “together as a family” where you act like a “real father” for “a welcome change”?

And are you really, really getting tired of politely replying “Go to hell”, only to have them unexpectedly get all angry and anti-social, for absolutely no reason? Like some vicious bi-polar demons from hell?

Anyway, the reason that I bring this up is that last night’s dinner began with the kids having some stupid-yet-serious discussion about some stupid zombie show on TV. Zombies, no less!

Naturally, being the ever-loving and devoted father who frets over the education of his darling children, I am already aghast that half of young people today have “no problem” with socialism.

At the risk of going off on a tangent where I become predictably hysterical with outrage, this is absolute proof that our schools have been taken over by evil socialists and communists to spread their laughable, long-discredited, low-IQ theories of “all you need is love and an expanding money supply.”

And now we’re discussing zombies, as if they really exist! Zombies, for crying out loud!

I deftly seized the moment to provide some educational value to the conversation which was obviously, by this time, sorely lacking.

So I helpfully offered “Did you notice that zombies never have any money? I mean, it’s no wonder they dress so badly! And why they don’t go to the dermatologist for their awful skin conditions!”

Immediately, all conversation stopped. I was, of course, hoping that they were, at last, having an epiphany about the importance of a functional monetary system.

Excitedly, I decided to start the tutorial with the basics. “And they are so lazy and stupid that they don’t even try the barter system!” I said. “The zombies could offer some labor, like babysitting the kids for the weekend so the desperate parents could get away for a long, relaxing retreat, in exchange for the brain of a dead relative who died recently!”

Alas, they just sat there, looking at me with that blank look of incomprehension upon their faces, but, thankfully, not actually drooling in their slack-jawed bewilderment.

Quickly wrapping up this important lesson about zombies, ruinous monetary policy and the evils of socialism with a triumphant flourish, I said “And now their money is ruined, they are ruined, and everything is a nightmarish, deathly dystopian mess. But note how they are still greedy little socialists, wanting to eat your brain without paying for it! Hahahaha!”

Naturally, I wanted them to suddenly say “Dad! How brilliant! A wonderful way to segue from popular culture into a devastating and withering attack on socialism and modern monetary policy! Tell us more!” while my wife would sit beaming with pride, instead of everything immediately ending with someone abruptly crying, jumping up and storming out, screaming hysterically about how they hate me, wish I was dead, worst father/husband/lunatic in the world, blah, blah, blah. You know. The usual.

Instead, to my amazement neither happened. Perhaps trying a new tack to shame me into behaving like a “normal” husband and father, they took up the theme that I, they, and the whole family would benefit if I cared about things other than monetary policy, gold, tasty snack foods, and, of course, television.

Stung at the bitter criticism, I wanted to acidly reply right in their nasty faces “Not care about gold and silver when the damnable Federal Reserve is committing every monetary sin ever thought of by anyone, anytime, anywhere in the history of the world, to expand government spending, by exploding the money supply, and now actually buying securities for itself to force asset prices up? Are you insane?”

But I didn’t say it. I admit I was distracted, as I was simultaneously thinking of an essay by Chuck Butler of EverBank, who recently wrote “The 10 largest Central Banks now own assets totaling $21.4 trillion!”, and which is a “10% increase from the end of last year”, and an essay by David Stockman, of the eponymous DavidStockmansContraCorner.com, who wrote “at a nosebleed 25X reported GAAP earnings, and after an 18% decline from their September 2014 peak already, the broad stock market is more over-valued than any time in history, including the peaks before 2008, 2000 and 1929.”

Any time in history! 1929! Ever! Yikes! Do you think this kind of insane bubble market could possibly exist without an exploding money supply? Hahahahaha!

Instead of going down that dark road, I decided to lighten the mood. “Hey! It’s riddle time! You like riddles, don’t you?” I jovially asked. “So, answer this: How is having gold like having children?”

Surprisingly, they replied almost in unison “Because you love gold and you hate us!”

Shocked that they would think such a terrible thing about their own loving dad, I had to gently admonish them “The riddle is how are they ALIKE, you morons, not different!”

Things went surprisingly downhill at that point, and nobody even tried to solve the riddle.

Of course, the answer is obvious when you think about it. The answer is that kids are like gold because they are both necessary investments and insurance in the future, but, in the meantime, a really giant pain in my Big Mogambo Butt (BMB).

Ditto having kids is a pain in my BMB, but they will be valuable one day when I am old and will need people to wait on me hand and foot, wiping drool off my chin, endlessly ferrying me back and forth to a long list of medical professionals, and serving as volunteer organ donors in case, you know, I need a little something in the “transplant” vein.

I can hear you asking “What in the hell is the point? Is there a point to any of this? Do you ever have a point, you moron? Or is it that you are willing to marginally extend your own life by a few years by harvesting your children?”

Yes, there is a point, as I will now make, since that you have asked so nicely. The point is that nobody can stop the monetary insanity, and the Federal Reserve and the other central banks must keep creating cash and credit until it is, literally, no longer possible.

Why? Because so much, so terrifyingly much, so stupendously much, so unbelievably much debt is owed that it is utterly impossible to even start trying to pay it back, because the economy would completely and cataclysmically collapse if we did.

So, cleverly summarizing, it is ruinous bankruptcy now for everybody if we stop going into more debt, but it is possible to keep the game going a little longer with ever-larger infusions of new cash and credit so that we have a bigger, MORE ruinous bankruptcy later on.

And it is not just Wall Street insiders who would suffer. Public pensions are underfunded by grossly unpayable amounts, all retirement savings of all private pensions are invested in the stock and bond markets, and government is getting bigger and bigger.

Then will be the time for “Money, money, money! Saving pensions! Saving jobs! Saving banks! Saving everybody and everything, as far as the eye can see! And if there are really zombies, then them, too!”

In the meantime, I have some Happy Mogambo News (HMN)!

You can relax! Take five! Take a break! Smoke if you got ‘em, because governments and delusional Keynesian economists will do everything they can to make sure it is not today, or anytime really soon, regardless of how devastatingly worse it will eventually make things. Maybe featuring zombies.

And so, with a little more time to accumulate silver and gold to make sure you will not financially die, and organ donors maturing at hand to make sure that you don’t literally die, you gotta realize that “Whee! This investing stuff is easy!”

The Mogambo Guru
for TheDaily Reckoning