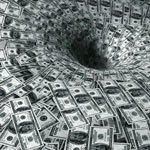 Your Liberty and Your Money

We begin with a cynical thought experiment. It’s really a conclusion about what’s going on in the financial markets. And the conclusion is this: the value of financial assets and currencies is being deliberately crashed in order to transfer wealth from the public to a small group of global elites.

Sounds crazy, right? Maybe even cranky? We’ll get to that shortly. But first…

The typical result of credit booms and busts is to transfer ownership of real assets and productive businesses from the public to the insiders. In our thought experiment, the Federal Reserve exists to make this happen in a way that doesn’t alert the public to what’s really going on. The insiders — or anyone who knows how these things work — sell to the public in the mania phase. The panic and crash phase of a bust is when the public realizes the game is up.

Prices crash and liquidity disappears in the bust. Real assets and the share prices of real businesses are left lying around on the ground. If your money didn’t get destroyed in the crash, all the good assets can be bought cheap. The end result is that the middle class ends up poorer and the financial/political elites end up owning all the good stuff.

This happens time after time in financial markets. Productive assets are slowly accumulated by a small group while in real terms, incomes fall for the majority. Another way to think of this is as modern feudalism, but with better-dressed peasants who have iPhones.

This reprieve from arbitrary death from above (the King) is probably the biggest improvement in modern feudalism. So far, the only people to be killed thusly are terrorists and unlucky strangers who don’t vote in US elections. And to be fair, when it comes to subsistence, there are plenty of cheap calories in the modern world. People may be malnourished on modern food, but they won’t starve. Worst case scenario, you eat your way into a food coma or some medical crisis.

Up until now, being a financial serf was bearable. But something is different about the preceding boom and the current bust. When Internet stocks crashed, it was a wealth transfer. People lost money. But it wasn’t real money anyway. It was the gains from the bubble, not capital saved for retirement.

Besides, in response to the dotcom crash the US Fed lowered interest rates. World monetary policy became synchronised. The result was a boom in all assets and in all places. Stocks, bonds, real estate, commodities…you name it. Nearly everything boomed.

Now we get to the part that’s different about this bust. This bust began in 2009. But the authorities soon discovered that things had become so complex and so large that a normal correction/wealth transfer was not possible. It’s okay to pump up Internet stocks and then watch them crash. But you can’t very well pump up the whole global financial system and then watch it crash, can you?

Can you? Well, yes, you could. But there would be a couple of unavoidable results. One result would be a global economic collapse. The system is interlinked now. A financial crash becomes an economic crash…the Greater Depression Ben Bernanke wants to avoid. But that’s just the start.

A financial crash means the end of the current global monetary system. US dollar devaluation played a key role in the credit boom. But it undermined the stability of the whole dollar system. You crash the system, you crash the dollar. What comes after the dollar? You can bet the people who benefit from the dollar system — the Fed — don’t want to find out.

But the most serious result of the system crash — and we’re talking much more serious than Microsoft’s blue screen of death — is that real people see their real lives really wiped out. When Middle Class savings are destroyed through stock market crashes, housing crashes, and inflation, people end up a lot poorer. And that’s just the Middle Class. The people who went into the crash with even less come out of it worse than ever before.

Let’s end the thought experiment there. It can’t be possible that anyone would wish for all those consequences of a system crash, could it? The only people who could wish for such a thing are the people who see it as a chance to build an anti-democratic global system from the ruins of the current one…a system with one government and one money and one rule of law which only applies to the governed and not the rule makers or money makers.

That can’t really be what they’re after, can it?

In any event, we will find out this week if coordinated central bank interventions from the Federal Reserve, the Bank of Japan, and the European Central Bank are enough to keep markets from crashing for a little longer. The central bankers are fighting a losing battle, we fear. When you look at the world’s financial system as a series of geometric shapes, it’s a giant wedge of credit supported by a tiny triangle of equity.

In banking terms, there’s only a small portion of real, quality collateral supporting a huge edifice of asset values. Sovereign government bonds used to count as quality collateral. But the debt crisis has changed perceptions of value and safety. What you have is a financial system supported by very few reliable, quality assets which aren’t also someone else’s obligation or promise to pay.

So let’s keep an eye on stocks and see how they hold up. Each new phase of money printing has packed a weaker punch. If the pattern holds, markets will be under pressure soon. And then we’ll see if the financial crash is simply a pretext for getting you to surrender your liberty as well as your money.

Dan Denning,
for The Daily Reckoning