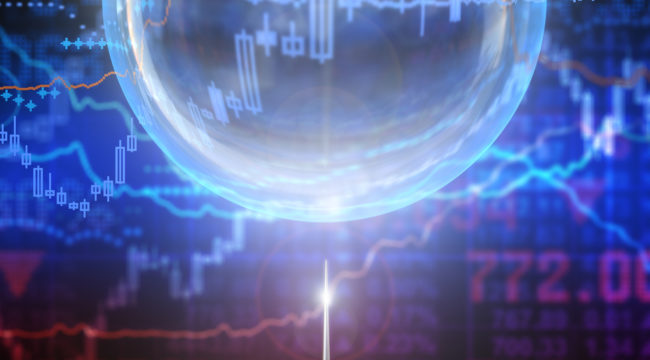 You Should Fear the Emerging Market Debt Bubble

Global debt has ballooned since the financial crisis as central banks have distorted markets and fueled debt bubbles in particular.

A lot of the increase in global debt has come from emerging market (EM) economies, especially China. In fact, a record amount of EM debt has accumulated during the past decade, mostly in dollars. A large portion of that debt is therefore denominated in U.S. dollars.

That’s why I’ve long argued that the first shoe to drop in the next crisis would likely be EM debt.

Borrowing is not a problem when dollars are cheap. Low interest rates mean the cost of servicing that debt is low.

The problem starts when the Fed raises rates or the dollar strengthens, even temporarily. The more the dollar rises, the more EM currencies and related markets fall. Dollar-denominated debt then becomes too expensive to repay or service as the dollar rises relative to EM currencies. Before long default becomes the only viable option.

This situation becomes more dangerous than even asset bubbles because debt is required to be repaid on a set schedule. If a country misses a debt payment, it could set off a chain reaction of defaults.

That’s why an EM crisis could quickly become a global crisis. In today’s world of financial globalization, any remote crisis can become an international problem in seconds. That’s the reality of today’s markets. Obviously, it could also have major ramifications for your own finances and investments.

Because of the Fed’s rate hike cycle and quantitative tightening (QT) stance, the dollar has become much stronger. The dollar has risen 6.8% since late January alone. And that’s put emerging markets under considerable pressure.

Dollars are fleeing emerging market economies as investors are pouring into dollar assets and U.S. Treasuries.

As the Fed itself has warned about such a scenario, “If these risks materialized, there could be an increase in the demand for safe assets, particularly U.S. Treasuries.”

That starts a vicious cycle that only strengthens the dollar and weakens EM currencies further. In other words, emerging markets are being deprived of dollars at a time when they need them most.

Panic spread throughout global markets last Friday as the Turkish lira plummeted after the Trump administration announced its plan to double tariffs on aluminum and steel imports. Already down substantially this year, the Turkish lira dropped as much as an additional 24% last Friday.

Even though it’s half a planet away from the U.S., the country could have a major impact. Like other emerging markets, Turkey borrowed a lot of money in U.S. dollars after the Federal Reserve initiated its zero interest rates in the wake of the financial crisis.

Turkey borrowed so much that its current foreign currency debt stands at more than 50%. Now, Turkey has a 15% inflation rate and a cratering currency.

As the Fed is raising rates, and the dollar is getting stronger, paying back that money is becoming much harder. The rise in the cost of debt payments means that defaults will become more likely.

Turkey’s central bank will need to raise rates to defend its currency, placing the government and economy in a difficult position.

The lira has been holding its own these past few days, but this dynamic could take a long time to play out. Do not assume the crisis is over, and it may be some time before Turkey recovers.

Going back to last October, his words offer a glimpse of what was coming.

Powell was then just the number two guy at the Fed when he publicly articulated his outlook on tightening interest rates, the rising dollar and the impact of both on emerging markets.

He conceded that higher U.S. interest rates and weakening EM currencies “could cause capital to return to advanced economies.” But, unlike those that actually pay attention, Powell was not worried. He believed that the “most likely outcome” of that policy shift for emerging markets “will be manageable.”

Powell’s statement matters. He now commands the central bank with the largest influence on assets in the world. Powell seemed to deny that the Fed is, as Zero Hedge sums it up, the “major determinant of flows of capital into developing economies.”

Later on as Fed chairman, Powell reemphasized that position at an IMF and Swiss National Bank gathering in Zurich. According to Powell:

There is good reason to think that the normalization of monetary policy in advanced economies should continue to prove manageable for EMEs. Markets should not be surprised by our actions if the economy evolves in line with expectations.

But Powell’s argument misses a central point. What he left out was that it was the Fed’s low interest rate policy to begin with that enabled countries to borrow as much as they did.

If money is cheap around the world, higher rates absolutely matter. It appears he simply did not understand the inflows of cash, which explains why he wasn’t concerned about the outflows.

He believes that if the Fed raises rates (“normalizes monetary policy,” which it’s been doing) and causes money to flow away from the emerging-market countries, it’s not his fault.

Powell was not alone in his lackadaisical approach to emerging markets.

Though the International Monetary Fund (IMF) has expressed concerns for years about the impact of a rising dollar and rates on EM markets, it recently said that a reversal of rates would be “orderly and will not take a toll on emerging markets growth.”

But capital flows won’t be the only negative for emerging markets if the Fed continues hiking rates. We could also see dollar-denominated interest on debt become squeezed if the dollar rises on the back of higher rates.

There’s also considerable reason to remain wary about not just emerging markets, but governments and corporations with too much dollar exposure.

How will the current situation affect Fed policy going forward?

Despite Powell’s previous comments, the current surge in the dollar gives reason to believe that the Fed won’t tighten as quickly as it’s said it would this year. A September rate hike, which seemed all but certain a short while ago, is now in doubt. Another rate hike right now and a stronger dollar would only throw more fuel on the fire.

Ultimately, central banks will intervene with additional easing if the crisis gets worse. That means more “dark money” will become available to prop up markets.

That also means stocks could technically continue soaring on the basis of cash or borrowed cash for an even longer period of time. Don’t be surprised if stocks move higher from here. That’s how dark money works to move markets.

Next to be banned could be this urgent video warning from Nomi Prins, a former Goldman Sachs director.

They may try to call it fake news. But it isn’t.

It could impact millions of Americans.

Watch this brief clip now to find out how you can protect yourself… and even profit from what Wall Street has in store for tomorrow.

But hurry, this urgent message comes down at midnight tonight.