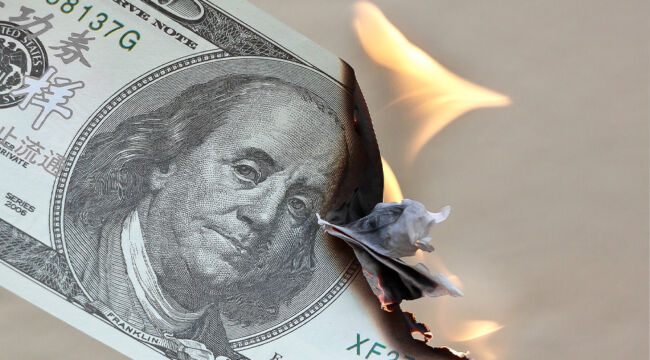 You Can’t Blame the Fed

For example, money includes cash and checking deposits. But then there’s “near money,” which includes such things as savings deposits and money market mutual funds. They can be converted into cash or checking deposits, so they’re considered near money.

Today I want to clarify what money and inflation really are.

First off, you have to understand what money printing is. How does the Fed actually do it? And where does the money go?

When the Fed “prints” money, of course it’s all digital. Yes, there is some physical currency that people carry around in their wallets, but 90% of money is created by an electronic entry in a computer.

The Fed calls the dealers and offers to buy the securities. The dealers send those securities to the Fed, and the Fed pays for them with money that it creates out of thin air.

One keystroke of a computer is all it takes. Contrary to what many believe, the Fed doesn’t have a printing press. The Treasury Department does, but that’s a different story. It’s all digital.

So that’s money printing. The Fed creates money out of thin air to pay for the securities it buys from the primary dealers. The question is what happens next?

The banks now have the money the Fed created to pay for the bonds. The banks then take the money and deposit it at the Fed in their reserve accounts (primary dealers have accounts at the Fed).

So the banks take the newly created money and send it right back to the Fed in the form of excess reserves, where it earns a small amount of interest.

The money doesn’t go anywhere. It doesn’t get into circulation, and it’s not loaned out. In effect, it’s sterilized, just sitting in dealer accounts at the Fed collecting a bit of interest.

So how does money supply affect the real economy? How can it possibly cause inflation? Well, that happens at the commercial bank level, including these big dealers, but also any other bank.

Of course, that money also comes out of thin air. Neither the Fed nor the commercial banks “print” money. It’s all computer entries.

Commercial bank lending can be inflationary. If the banks are making new loans, people are taking the money and buying new cars or appliances, going out to dinner, taking vacations, etc., that has some inflationary potential.

But that’s not happening. The banks aren’t making many loans, which means they’re not creating much money.

The missing ingredient in all this is what’s called velocity. Velocity sounds technical, but it’s a pretty simple concept. It’s the turnover of money.

It’s All About the Velocity

But velocity has been crashing. Not just going down, but crashing. Today’s velocity is about 1.5, meaning a dollar is barely producing any goods and services over and above the money supply itself.

The point being, all the money printing, whether by the Fed buying bonds from dealers or by commercial banks making loans to customers, isn’t producing the inflation because money velocity is minimal.

The key takeaway is that inflation has nothing to do with Fed “money printing.”So why are we seeing today’s soaring inflation?

We first need to understand that there are two kinds of inflation. One is called demand-pull inflation and the other’s called cost-push inflation.

So what does that rising demand do? It creates shortages. Producers are cranking the goods out, selling as fast as they can. Prices rise. There’s almost a frenzy, and velocity skyrockets. Then you get inflation. That’s demand-pull inflation.

The other kind of inflation is called cost-push inflation. This doesn’t come from the demand side, but the supply side. It means whether the economy is strong, whether there’s an inflation fear or not, prices are going up because producers are causing the prices to go up.

It’s not price gouging. It’s not a conspiracy, just basic economics. That’s what’s driving inflation right now. Supply chains were already disrupted by the pandemic. Now you have the war in Ukraine, leading to even more disruptions.

With that much supply coming off the market, it’s bound to raise the price of wheat. That’s just one example.

There are also energy shortages, exacerbated by the war in Ukraine. But a lot of it is policy-driven.

The Biden administration killed the Keystone pipeline. The pipeline would have connected to the U.S. pipeline system in the Midwest. Then the oil could have been distributed all over the United States to refineries or places where it’s needed. But Biden killed it.

His administration also ended new leases on federal lands and handicapped the fracking industry. Jen Psaki, the president’s spokesperson, tried to downplay these policies’ impact, saying there are already 9,000 leases but they’re not being used.

Well, the reason they’re not being used is because oil companies drilled samples and found no oil. So it’s true that these leases aren’t being used, but it doesn’t mean there’s untapped oil there.

In fact, the opposite.

It means there’s no oil, because they already tested it and didn’t find anything. Companies need new leases to explore, which they’re not getting. It’s just propaganda, but they think the American people are going to buy into it.

The bottom line is the inflation we’re seeing so far is cost-push inflation resulting from supply chain disruption, bad policy, the pandemic and the war in Ukraine.

And nothing the Fed can do will change any of that.