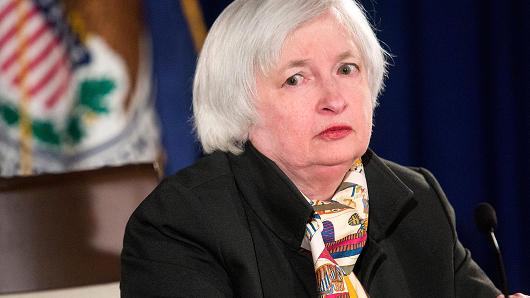 Overall, world stocks have held up well, despite cascading evidence of impending doom.

U.S. corporate profits have been in decline since the second quarter of 2015.

Globally, 36 corporate bond issues have defaulted so far this year – up from 25 during the same period of 2015.

Economists at JPMorgan Chase put the U.S. economy growth rate for the first quarter at 0.7% – down by over one-third from earlier estimates.

And there is $1.7 trillion in junk bonds outstanding – a trillion more than in 2008. Some of these are sure to default in the months ahead.

Speculators are already shorting the banks with the biggest piles of these grenades in their vaults.

Over the last few days, we’ve been trying to coax out an insight.

It concerns whether Fed chief Janet Yellen really does have investors’ backs. Not that we have any doubt about her intentions.

Her career has been financed and nurtured by credit and the people who provide it. Crony capitalists, corrupt politicians, and Deep State hustlers paid good money for her; she’ll do all she can to avoid letting them down.

But something isn’t working. Not for her. Not for Bank of Japan governor Haruhiko Kuroda. Not for the president of the European Central Bank, Mario Draghi. Not for People’s Bank of China governor Zhou Xiaochuan.

Their tricks no longer work.

We’re on record with a bold prediction: The Fed will NEVER normalize interest rates.

Readers may wonder how that jives with our deeper insight: Nobody knows anything.

And of course, we don’t know whether the Fed will normalize or not. But let us further explain our reasoning; you make up your own mind as to where to place your bet.

The short version of our argument: For the last eight years, the Fed has tried to stimulate the economy with ultra-low interest rates. Business, consumers, and government now almost all depend on credit… and most need ultra-low rates to make ends meet.

Consumers are in better shape, generally, than they were in 2008. But corporations and governments are in worse shape. Raise the cost of funding, and you will push many of them over the edge.

Banks, pension funds, and insurance companies are especially vulnerable. They’re now stocked up with low-yield government bonds. Should interest rates rise, those bonds will go down in price.

In other words, raising rates will provoke the very calamity the Fed was trying to avoid: the bankruptcy of the financial sector.

The Triumph of Politics

How did Bernanke, Yellen, Kuroda, Draghi et al think they would ever get away with it?

How could they believe – even for a minute – that a debt problem could be solved by adding more debt?

And yet, they always got away with it before.

After World War II, for example, the feds had a higher debt-to-GDP ratio than they have now. But after the war, the economy boomed, inflation rose… and soon the debt was no problem.

The job of colleague David Stockman – director of Reagan’s budget team – was to bring those deficits under control. He failed… a story well told in his book The Triumph of Politics: Why the Reagan Revolution Failed.

Conservative economists thought the U.S. would sink into another slimy pool of deficits and debt. But once again, a spurt of growth (with low deficits) during the Clinton years reduced the debt to a more manageable level.

Because this time, it’s not working. Growth is slowing. Productivity has stalled.

As former Goldman boy Gavyn Davies put it in the Financial Times: “The slowdown in labor productivity accounts for most of the massive disappointment in global output growth since just before the 2008 crash.”

Professor Robert Gordon at Northwestern University believes there is more to it than just a cyclical downturn. He maintains that the extraordinary growth of the Industrial Revolution had played itself out by the 1980s. And it can’t be repeated.

We have another hypothesis (which we’ll talk more about tomorrow): Either way, the debt can never, voluntarily, be brought under control. And the Fed can never “normalize” rates.