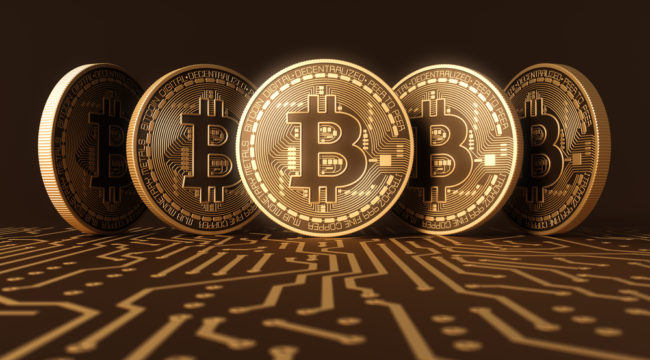 The "Wrong People Are Getting Rich"

The wrong people — rebels, outsiders, nerds and techies — got on the cryptocurrency boat while their insider/rentier “betters” blew it and are now raging bitterly onshore, watching the crypto boat sail away.

The psychology of money, wealth and speculative manias is endlessly fascinating. Most of what’s written on these subjects focus on the process of building wealth as if it were a quasi-science rather than a psychologically driven process.

Only speculative manias attract a psychology-based analysis, usually characterized as some variant of the madness of the herd running off the cliff en masse.

But money and wealth are nothing but more sedate reflections of the same dynamics that drive speculative manias. Much has been written about cognitive biases and thinking fast and slow, but these explorations do not exhaust the psychology underpinning money, wealth and speculative manias.

Few things have unleashed the Monster Id of wealth and money quite like bitcoin and the cryptocurrencies. Compare the speculative manias of the dot-com era (1995 – 2000) and the housing bubble (2002 – 2007) with the crypto-mania: in the first two manias, the status quo embraced the mania as rational and justified: the Internet would continue growing for decades, housing never goes down, etc.

But the status quo has not embraced cryptocurrencies with the same enthusiasm — why? Instead of endless justifications for valuations, the status quo is filled with reports that 97% of all economists view bitcoin as a bubble, and endless articles decrying the bitcoin bubble as a fools game that will deservedly burst, and soon.

Why did the status quo embrace irrationally exuberant bubbles in the 1990s and 2000s, but views the exuberance of cryptocurrencies with disdain? I think this is a fruitful topic to explore, largely because nobody seems to be asking this question.

Here are my suppositions:

1. The status quo reviles cryptocurrencies because the wrong people are getting rich.

2. The status quo reviles cryptocurrencies because the usual insiders (Wall Street and its politico leeches) didn’t get on board early, and they’re deeply offended that they missed the boat.

3. Until the advent of bitcoin futures trading, the usual insiders had no means to skim profits from the exuberance.

To me, these dynamics go a long way in explaining the 97% of the status quo’s visible loathing of bitcoin and the cryptocurrencies.

In other words: why embrace some manias but not all manias? Answer: some manias make the usual insiders filthy rich, others don’t. The dot-com mania generated billions of dollars in profits for Wall Street and the rest of the financier-politico leeches (i.e. the rentier class) via IPOs (initial public offerings), insider deals and vast fees generated by trading the mania with other peoples’ money.

The housing bubble generated billions of dollars in profits for Wall Street via the issuance of mortgage-backed securities (MBS), CDOs and other exotic financial instruments based on mortgages and related securities, and realtors (and the rest of the housing industry) banked billions in commissions, fees and other skims.

In both cases, Average Joe and Jane reckoned the manias were their ticket to untold wealth. A relative few Average Joes and Janes did strike it rich, usually by being early employees of companies that went public, and a few others managed the impossible, i.e. buying low and selling high and then exiting the casino with their winnings.

But the vast majority of the Average Joes and Janes were fodder for the chipping machines of Wall Street and the FIRE (finance, insurance, real estate) insiders and elites. Far more people lost money in the period between 1997 and 2003 than won big and kept their winnings. Millions of people gambled on the housing bubble expanding forever and lost everything.

Now compare that to the cryptocurrency mania: Wall Street and the rest of the financier-politico leeches (the rentier class) have virtually no insider skims in the cryptocurrencies — is it any wonder they hate bitcoin with a passion that correlates to their inability to rake in billions of low-risk fees from the mania?

The psychology of FOMO (fear of missing out) is well known; the indignation of those who didn’t get on board before the ship sailed is less well noted. The financier/rentier class has a very high opinion of its own moxie and intelligence, and the fact that they missed the boat entirely on bitcoin et al. is like a knife of wounded pride plunged directly into their greedy hearts.

Those who can see past their own wounded pride are busy investing in blockchain applications and cryptocurrency funds, while those who cannot let go of their wounded pride are raging daily against the bitcoin bubble, and praying nightly to their evil gods for its collapse, to prove themselves right after all.

Every day that bitcoin doesn’t crash to zero is a day of pain for those whose pride was wounded by missing the cryptocurrency boat.

Even worse — if that’s possible for those whose greed is insatiable — the wrong people have gotten rich — techies, nerds, outsiders, rebels, etc.

It’s as if the crypto-rabble rebels just blew up the Financial Empire’s Death Star and got away with it. 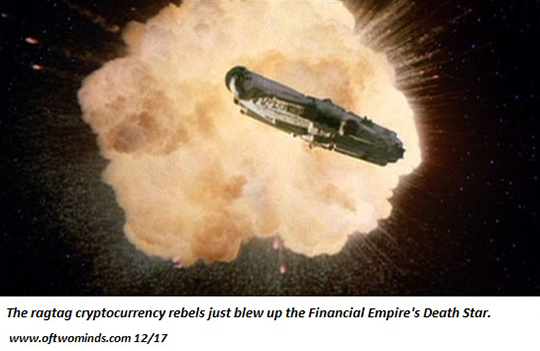 Interestingly, few balk when privileged insiders mint fortunes for doing essentially nothing but exploiting their privileges. The corporate media heaps fatuous praise on insiders who reap billions of dollars from others’ labor and ideas via IPOs, leveraged buyouts, etc. because of course these rentiers are our bosses and overlords.

It’s dangerous for a mere peasant in the Corporate-State Feudal System (i.e. the status quo) to speak truth to power against the Financial Aristocracy that issues the paychecks.

You can bet that if a Wall Street insider had bought bitcoin in size for $100 each, said insider would be justifying today’s valuations and arguing for higher valuations ahead, just as he/she did in the dot-com and housing manias.

So it all boils down to this: the wrong people — rebels, outsiders, nerds and techies — got on the cryptocurrency boat while their insider/rentier “betters” blew it and are now raging bitterly onshore, not just resentful but indignant that this mania didn’t enrich insiders like it should have.

So sorry about your Death Star. I guess this doesn’t bode well for your bonus and promotion in the Imperial hierarchy.