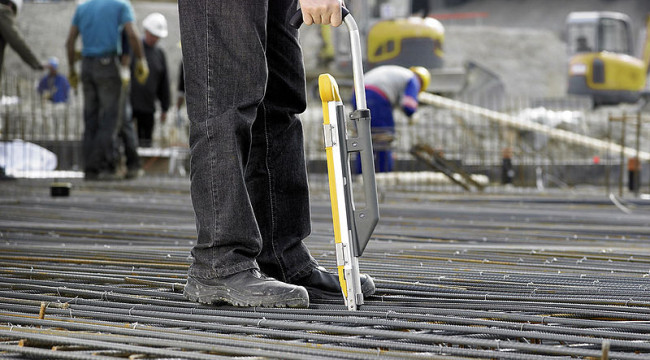 The index is down by almost 9% since the start of the year.

“These developments, if they prove persistent, could weigh on the outlook for economic activity…” proffered a nervous-looking Janet Yellen in her testimony on Capitol Hill yesterday.

She was signaling to investors.

“Don’t worry about us,” she may as well have said. “If we can get away with a big U-turn, we’re not going to raise rates anymore.”

On Tuesday, Maersk Group, the world’s largest container shipping company, said it was suffering a “massive deterioration” in its business.

“It is worse than 2008,” its CEO, Nils Andersen, told the Financial Times.

But this is not even near the bottom for the world economy.

Hedge fund manager Kyle Bass warns that the other shoe is a big one… and it hasn’t dropped yet.

What do all these projects require?

Concrete is reinforced with steel bars. As the pace of building slows, the price of rebar goes down.

Total losses from debt defaults could be four times U.S. losses in the 2008 crisis. And that is just the beginning.

Next week, we’ll explain why… and why Trump and Sanders are getting so much of the millennial vote.

In the meantime, here’s an essay from the archives…

Recent studies of voting patterns confirm the obvious. Zombies vote for higher taxes. Cronies vote for lower taxes. All believe they are voting for matters of principle.

Alan Greenspan believed strongly in gold – until he became a central banker.

Then he believed he could do a better job than gold. Or at least he pretended to.

It was a job requirement.

In public life, people generally believe the dominant myth of the system in which they live.

We are all democrats in the U.S. We believe in electing our leaders.

But there is no particular reason why this method should be superior to choosing our leaders by lottery or hand-to-hand combat.

Throughout most of history, people believed in other systems.

Are we so much smarter now?

Circumstances change. Ideas change with them.

The U.S. became an empire without anyone noticing. But now, Americans believe in empire… So much so that they are willing to spend trillions of dollars to maintain it.

The national debt of the U.S. is $19 trillion. At least $5 trillion of that can be traced to the costs of empire.

We have military bases all over the world. We believe we must meet challenges in Iraq, Syria, North Korea – all around the periphery of the empire.

We may just as well leave the poor Iraqis, Syrians, and North Koreans to take care of their own problems… But the thought wouldn’t be compatible with the imperial purple.

Parasites of the Affluent Class

And a rich person acts like a rich person. He cannot get richer and richer forever. So he must find ways to get rid of his money.

Trees do not grow to the sky. There is no yin without a yang… no day without night… no boom without bust.

Everything regresses to the mean – including the wealth of an individual or a group.

Even our own lives regress. No one was ever born who was not destined to die. The mean is the grave – for which we are all bound.

When a man gets a certain amount of money, he takes up the beliefs of a man who needs to spend it.

He believes he needs a bigger house. He believes that more expensive wine is better than the cheap stuff. He may even take a course on wine… and bore his friends and neighbors with his sophisticated palette.

He believes a Mercedes-Maybach is superior to a Chevy. He believes he needs a mistress. Or a yacht.

When a man makes some money, he finds himself the subject of attention of what Gloom, Boom & Doom Report publisher Marc Faber calls “the immediate parasites of the affluent class.”

Then there are the “secondary parasites.”

A rich man’s duty is to believe these people give him some advantage.

But all these things come at a price. They are handicaps.

When he is engaged in a quarrelsome divorce, a rich man has less time to devote to his business. He forgets to study his sales figures when he is at wine school. And much of his fortune could be easily separated from him by clever financial planners.

He gives himself these handicaps until he is able to get his wealth down to more reasonable levels – closer to the mean, that is.

If he dies before his work is done – while he still has some change in his pockets – he can be sure that the next generation will finish what he began. In a few years, the family will have average wealth rather than extraordinary wealth.

So, too, does a rich society need to give itself handicaps – so that its wealth and power can come back to a meaner level.

The U.S. surpassed Britain as the world’s leading economy in the 1890s when Queen Victoria was on the throne and Benjamin Harrison was American president.

America’s lead gained over the next five decades – greatly aided by two devastating European wars… one of which it helped prolong and make far more disastrous for Europe than it otherwise would have been.

But along with its wealth, America’s handicaps increased. It now spends about as much on its military as the rest of the world combined.

After 9/11, it might have put a few more cops on the case… instead, it launched a “War on Terror” – another costly, distracting handicap.

Over the years, the U.S. has also increased its expensive social welfare programs, and the economic freedom that made its economy the leader of the world has given way to a rigged and heavily regulated economy.

GM – once the largest and most profitable business in the world – now has the handicap of having to spend thousands of dollars in health and retirement costs for every car it builds. Its competitors in China have almost none.

Eventually, convenient beliefs become inconvenient. Handicaps take too much time and too much money.

Then the rich man, GM, and the empire – all take up more modest roles and more modest beliefs.