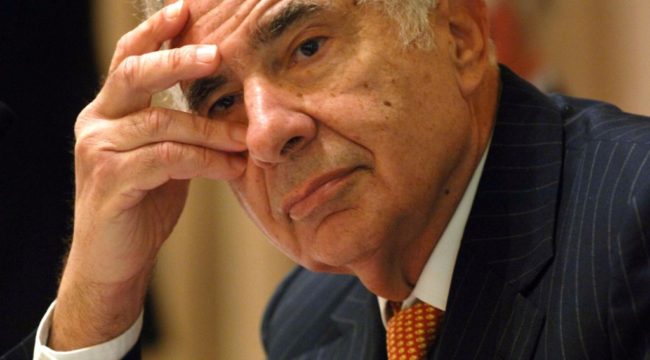 The World’s Greatest Investors Are Starting to Panic

At the “Delivering Alpha” conference in New York, billionaire investor Carl Icahn gave his opinion on our precarious markets:

“You look at the environment, and I think it’s very dangerous. You’re walking on a ledge and you might make it to the end, but you fall of that ledge and you’re really going to see trouble.”

Icahn believes the Fed’s in a trap. It needs to raise interest rates but risks causing a market meltdown by doing so.

And Icahn’s not the only one who sees trouble ahead…

Ray Dalio of Bridgewater Associates runs the world’s largest hedge fund. He used the same “D-word” at the conference as he identified a “dangerous situation” due to central banks still screwing around with loose monetary policy.

And Paul Singer of Elliott Management spoke about the massive risk created by these same low interest rates:

“I think it’s a very dangerous time in the global economy and global financial markets.”

None of these guys has the ability to accurately predict what’s going to happen in the future. But with so much smart money sending out such clear warning signals, it’s a good idea to take stock of your investment strategy—now.

As trend followers, we’re prepared for any “danger” that comes our way. We always have a plan for the unexpected.

Trend following has delivered strong positive returns each decade for more than a century — all because there is always a plan of attack in advance of market movement.

That includes remarkably consistent performance over such an extensive time horizon that includes life-changing events such as the Great Depression, multiple recessions and expansions, multiple wars, the Global Financial Crisis, and periods of rising and falling interest rates.

The bottom line is trend following works extremely well when crisis hits because it seeks to capture the majority of a market trend, up or down, across all major asset classes.

It’s this diversified strategy of investing in anything that’s working that has consistently delivered substantial abnormal returns for trend followers for more than 100 years.

And portfolio diversification doesn’t only work in trend following. It’s also been a core philosophy of investing titans like Icahn, Dalio, Singer and many others.

In fact, as Chris Mayer, Chief Investment Strategist at Bonner & Partners, explains below, it’s one of two critical factors that the world’s most successful investors regularly use to get superior returns.

Warren Buffett’s Berkshire Hathaway (BRK) has been one of the best performing stocks of the past half-century.

Berkshire, as you probably know, owns a diversified collection of businesses acquired over its 50-year existence.

Two key factors helped make Berkshire great: It had permanent capital and it could invest in anything.

While there is only one Warren Buffett, there are plenty of talented investors at the helm of similar vehicles. Below, I’ll talk about one of them.

Before I get to that, let’s look at those two key factors:

Permanent capital. Investors are a skittish lot. They tend to pull money out of funds after the market has fallen. If you’re running a fund, it means you have cash going out the door when the opportunity set is richest.

If you have permanent capital, as Berkshire does, then when investors sell the stock, the amount of cash Buffett has to invest doesn’t change.

The ability to invest in anything. Buffett can and does buy anything. He owns railroads, insurance, jewelers, and a long list of other investments. He doesn’t have to invest unless he thinks it’s a good bet.

So, there are a number of companies somewhat similar to Berkshire that you’ve probably heard of: Markel, Fairfax Financial Holdings, Loews Corp, Icahn Enterprises, and Leucadia National are some of the most frequently mentioned.

Sometimes people will mention Greenlight Re (Reinsurance), Third Point Re, and Pershing Square Holdings. These allow you to ride the coattails of three celebrated investors: David Einhorn, Dan Loeb, and Bill Ackman, respectively. But they are not quite so similar to Berkshire as the ones above.

There is another smaller one you may not have heard of: HC2 Holdings (HCHC). This is an investment vehicle run by Phil Falcone, who owns 11% of the stock.

Falcone is a talented investor who ran a publicly traded vehicle called Harbinger, which more than doubled under his four-year reign. But you may know him best for his past legal troubles with the SEC and communications company Light Squared (now rebranded as Ligado Networks).

With that behind him, Falcone has been on a redemption tour. HC2 owns a variety of businesses: Schuff (a steel fabricator) and Global Marine (undersea cables), as well as investments in insurance and biotech.

Most recently, Falcone made a bid to acquire Andersons, a publicly traded agricultural firm. This is quite a find by Falcone and shows his ability to find attractive deals. Anderson’s is under-managed with key assets – such as grain elevators and fertilizers – worth significantly more than Falcone’s offer. (We’ll see if he gets it done.)

For the past three years, I’ve been developing a blueprint for finding early-stage companies that share the key traits of Berkshire: permanent capital, the ability to invest anywhere, and a talented investor at the helm.

I’m hosting a free investment masterclass to show you how it works – and how it can vastly improve your investment returns. For details, see below…

Buffett Can’t Buy This Stock… But You Can!

Warren Buffett pulled a complete 180 on airlines over the last decade. But today, Jody Chudley is revealing a stock that even Buffett wishes he could invest in…