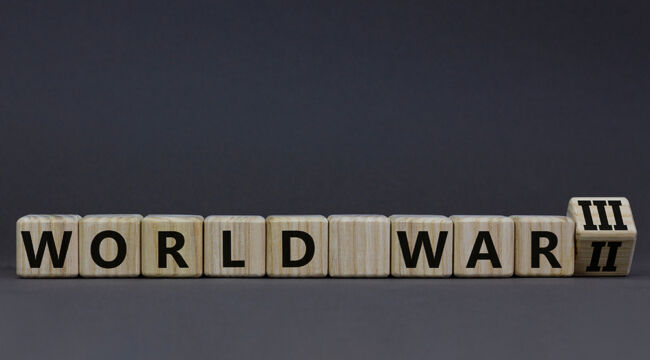 That’s a serious question and deserves serious consideration by investors. A wave of analysts and commentators have warned that the war in Ukraine could spin out of control and escalate into World War III.

One variation on that theme is that the war could escalate into a nuclear war with tactical nuclear weapons deployed. Most point a finger at Russia as the party that will launch a nuclear strike out of desperation at a failing campaign in Ukraine.

Actually, the opposite is true.

The Russian campaign is not failing (it has been on hold for several months awaiting the right conditions to launch a winter offensive). You just don’t hear about it in the mainstream media, which is essentially a propaganda outlet for Ukraine.

And the party most likely to use nuclear weapons first is the U.S. in order to save face and destabilize Russia once Ukraine is on the brink of collapse.

Many people have a hard time believing that. They’ve been told that Putin is the devil incarnate and would probably like to destroy the world. We like to think that in modern times we’re sophisticated and above falling prey to propaganda. Unfortunately, it isn’t true.

The fact is the U.S. did wage the only nuclear war in history from Aug. 6–9, 1945 and had a successful outcome. I’m not getting into the morality of it here, one way or the other. I’m just being objective.

Either way, another nuclear war could not be contained and it would be tantamount to World War III. It amounts to the same thing.

But my point is different. It’s not that we may be headed to World War III; it’s that we’re already there. The issue of when wars in general and world wars in particular begin and end is not as clear cut as many believe. There are many examples.

When Does a War Officially Begin? It’s Complicated

Clearly, the First World War was in a countdown phase as early as 1911.

The fact is the beginning of World War I (then called the Great War) was a series of blunders. There were many other mistakes in addition to those just mentioned. Of course, the U.S. did not enter World War I until April 6, 1917.

The end of World War I was also a muddle. Most students recite Nov. 11, 1918, as the day the war ended. That’s not quite right. That is the day an armistice was signed and the shooting stopped. But an armistice is a ceasefire, not a peace treaty. The actual Versailles Treaty that ended the war was signed on June 28, 1919.

There’s nothing new about blurry lines on when wars begin and end. The Korean War stopped with an armistice signed on July 27, 1953, but it’s still technically not over; there has never been a peace treaty.

The most interesting case (and the one most pertinent to the war in Ukraine) is the beginning of World War II.

Most Americans reflexively date this from Dec. 7, 1941, when Japan attacked Pearl Harbor. That’s the right date for U.S. entry, but of course, the war began on Sept. 1, 1939, when Germany invaded Poland. The U.K. and France declared war on Germany on Sept. 3.

Yet did World War II actually begin much earlier?

Japan invaded Manchuria on Sept. 18, 1931. They established a puppet regime there called Manchukuo led by Emperor Puyi (the infamous “Last Emperor” of China, and a descendant of the Qing Dynasty). This was followed by a full-scale invasion of China by Japan in 1937 and the horrific Rape of Nanjing in December 1937.

Of course, the European and Pacific theaters of World War II were different and geographically separated, but it is at least arguable that World War II began in China in 1931 or 1937 at the latest. I lean to that view personally.

And let’s not ignore the Spanish Civil War (1936–1939) in which Germany bombed Guernica, Russia financed the Popular Front and mercenaries formed the International Brigades, including the American Abraham Lincoln Brigade. The spectacle of the U.S. and Russia fighting Germany on Spanish soil was a neat preview of World War II.

The influx of foreign fighters to the war in Ukraine offers a modern parallel.

The Case for the Start of World War III

So the case for fuzzy beginnings and endings of wars is clear. What’s the case for saying World War III has already begun based on the situation in Ukraine?

The first point is the number of nations directly involved. It’s nonsense to say that NATO members are cheering on Ukraine from the sidelines. Those countries are directly involved in supplying weapons, intelligence, money, ammunition and boots on the ground.

Poland and Lithuania are supplying sophisticated Leopard tanks to Ukraine. The U.K. is preparing to supply their most sophisticated tank — the Challenger II, as well. The U.S. is providing Bradley Fighting Vehicles and Stryker armored vehicles.

Russia has been no slouch when it comes to enlisting allies and mercenaries. The Wagner Group, a privately owned mercenary army, has been on the front lines near Soledar and Bakhmut.

Russia is getting drones from Turkey and Iran. Fighters are arriving from Syria. China is providing financial support and offering technology that helps Russia to build its weapons and continue its missile attacks.

Up the Escalation Ladder

Of course, a long list of countries is providing support for Ukraine by participating in U.S.- and EU-led financial and economic sanctions.

The countries now directly involved in the war in Ukraine with weapons, money, intelligence, mercenaries or financial sanctions include the U.S., the U.K., Germany, France, Poland, Lithuania, Canada, Australia, Ukraine, Russia, China, Syria, Iran, Turkey, Japan, Romania, Belarus and Moldova. These countries span four continents. The economic ramifications are global. If this is not a world war, it’s not clear what is.

The Third World War is here. It may be at the 1937 stage rather than the 1941 stage. Let’s hope that status prevails. It likely will not.

Importantly for investors, this war is not close to a conclusion. It is far more likely to expand in terms of affected nations, financial sanctions and kinetic warfare.

The danger of escalation to a nuclear exchange is real and growing. Will anyone stop it before it’s too late?