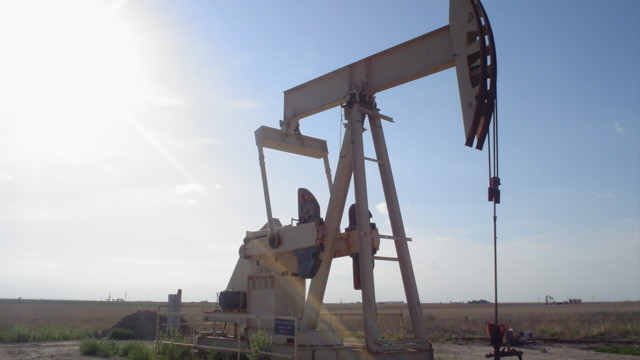 Oil’s flashing red on the screen again today, down 3.5%. With all of the talking heads making predictions on where crude will head next, let’s touch base on our “lower for longer” thesis. As you’ll see there’s some new dialogue to cover… (and lower prices ahead.)

So, I’ve read countless articles about how “over time” the global supply of oil will drop and demand will slowly continue to rise and then prices will recover to $50-60 or even $75-range.

$75 oil? That’s great! Too bad it’s not going to happen any time soon.

Most articles I’ve read are written in a vacuum. And it seems like no one accounts for a handful of simple facts, two in particular…

First, U.S. shale production isn’t slowing down like everyone thought. So a lot of the folks that are predicting a slow and steady rise to $75 simply won’t see it.

As the dust settles in the U.S. it will be abundantly clear that many drillers will keep drilling at $50 oil. News flash: We’ve seen prices well below $50 a lot this year. And while production is pulling back, there’s no sea-change in the works, still!

Sure, many poorly-run companies will go belly up. But in the meantime, many well-run companies are cutting costs and lowering the price it takes to pull a barrel of oil to the surface. They’re focusing on sweet spots and increasing efficiencies.

Heck, even in North Dakota, by no means the most economic U.S. Shale play, drillers can still make a buck at $50. According to Reuters, “the 10 largest oil producers in the state can maintain existing production with U.S. oil prices at or above $50 per barrel.”

The reason has to do with the futures market.

Remember, oil is a fungible commodity that trades massive volume every day. It also trades in the futures market. So oil producers can actually sell oil in September…TODAY!

That’s a great option for them – and it also will inherently put a ceiling on future oil prices.

You see, once the price of oil starts to creep higher, the well-run companies will start selling their oil in the futures market at any point they can make a buck. Maybe as low as $35, $40 or $50?

Do you see my point? Whenever oil prices creep up to that level, we’ll start to see a massive wave of future oil selling, from U.S. producers — effectively creating a ceiling on prices.

What we’re seeing is a race to the bottom in prices. If large well-run players can make money at $40 they’re not going to wait for $50 futures contract anymore, they’re going to sell at $40. Which begs the question from the auctioneer: Do I hear $35?

But the U.S. isn’t the only race to the bottom we’re seeing…there’s a second set of facts that’s also pressuring crude.

See, over in the Middle East (and Russia), we’ve got a different race shaping up.

Low-cost global producers, namely Saudi Arabia, are still producing oil full tilt. Iraq is growing production. And with the sanctions lifted, Iran is also joining in. So, while the U.S. producers are in a dogfight to see who can produce oil the cheapest, on a global scale we’re seeing who can produce the MOST!

The idea there is simple. If you’re Saudi Arabia and your cost of oil is $10-20 per barrel (if that), you can afford to produce as much oil as possible. Every barrel is still going to make you money.

Here’s the point, we’re over a year into Saudi Arabia’s full-on oil price war. From the onset, Saudi’s goal was to maintain market share. And the only way to maintain that market share — when oil is VASTLY ABUNDANT — is to pump more and lower your price.

This is a complete U-turn from the OPEC policies of the early 2000s – indeed, OPEC’s old game of cutting production won’t work for Saudi Arabia. In fact, a production cut out of Saudi would only hurt them.

Here’s what I mean…

Let’s say the Saudis get together with OPEC and Russia and decide to cut production in order to goose the price of oil higher. That market will rejoice and crude prices will head higher – heck, overnight you’d probably see a $10-20 (over time) rise in crude prices. And for arguments sake, let’s say that brings the price to $50 a barrel.

Would the Sheiks and Russians start doing a happy dance? I’m sure they would… but it won’t last long.

As we know there’s plenty of oil under U.S. soil, and at $50, producers would be happy to keep-up production. And there’s the kicker… more U.S. Shale production is EXACTLY what the Saudis want to avoid.

So you see, the Saudis are stuck. With low oil prices the country is running at a budget deficit. Heck, recent headlines shout “Saudi Arabia could be bankrupt by 2020.”

Well, the Saudis know just as well as we do that the only real way for them to make a buck is to increase volume. They need to pump more oil. More barrels equal more dollars, simple as that.

Another important part of the story is that the Saudis don’t care who they leave in their wake. $20-40 oil would put a lot of U.S. shale producers in the red, but it likely won’t kill U.S. shale. However, $20-40 oil could upend an OPEC producer or two.

When lower prices come home to roost in countries like Algeria, Iraq, Libya, Nigeria and Venezuela – watch out. Remember, these countries may not have the wherewithal to increase production – so a lower oil price equals less money for them.

A breakdown in one of those countries is coming – but, of course these things don’t happen overnight.

In the meantime, Saudi Arabia’s oil price war is still going strong. Right now, there’s no cut in sight. And until a big producer falls, expect low prices to continue.

Add it all up and low prices are here to stay for the time being. And in the short-to-medium timeframe. Don’t be surprised by the low price of oil, there’s lots of the stuff to go around.