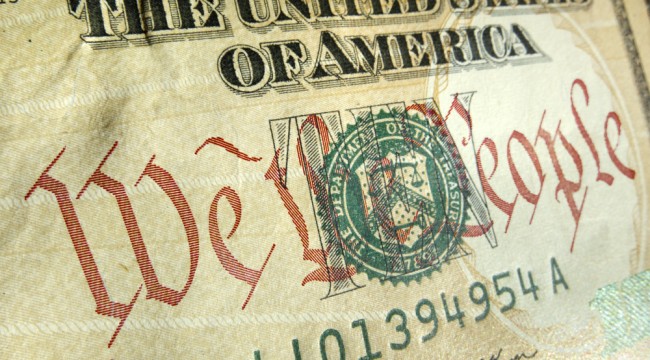 There is no reason rooted in the real world to explain this frothy stock market. In every single region of the planet, the post-crisis, central bank fueled expansion cycle — tepid as it was in the global aggregate — is faltering badly.

Japan’s economy is only a hair bigger than 5 quarters ago (0.8%) before Abenomics supercharged the Bank of Japan printing presses. Meanwhile, even as real wages in Japan plummet to modern lows, the BOJ’s balance sheet has now reached 55% of its GDP — a ratio that would have been unimaginable even a decade ago.

…the year of 3%+ “escape velocity” is heading for the lowest rate of GDP growth… since the 2009 bottom.

Likewise, notwithstanding Mario Draghi’s “whatever it takes” bluster, the only thing that has happened in perpetually recessionary Europe is a short-lived stampede of the fast money into peripheral debt. And that was on the tenuous predicate that the debt issued by basket cases like Italy and Spain can only go up because Mario might be buying it sometime down the road. Soon it will be apparent, however, that the Euro area economy benefited not a wit from Mario’s monetary magic, and that the hedge fund punters can dump their rented bonds as fast as they piled on.

And the schizoid policy of the comrades in Beijing needs no elaboration. Stabilizing China’s tottering tower of $25 trillion in debt is far beyond the pay and grade of people who believe with Mao that power comes out of the barrel of a gun, and with Wall Street Keynesian’s that prosperity comes out of the end of a printing press.

And now the usual Wall Street suspects are also busily marking down their US GDP numbers for Q2 and their outlook for the balance of the year. What was supposed to be the year of 3%+ “escape velocity” is heading for the lowest rate of GDP growth — about 1.5% at best — since the 2009 bottom.

And even that depends upon believing that the Commerce Department’s GDP deflator is actually only running at a 1.4% annual rate. There’s not a chance that’s true for households which consume energy, food, health care, transportation and educational services, not iPads.

So with the global expansion cycle faltering, profit ratios at all-time highs and PE multiples in the nose-bleed section of history — nearly 20 times reported earnings for the S&P 500 — there is only one thing left for the Wall Street robots to do.

Namely, vigorously buy the latest dip because the Fed has another new sheriff at Jackson Hole purportedly bearing dovish tidings. To wit, after 6 years of pinning money market rates to the economic floorboard at zero, Janet Yellen espies an economy still encumbered by “slack”, and will therefore be inclined to keep Wall Street gamblers in free money for a while longer.

This is just more Keynesian bathtub economics, but the Wall Street Journal did have a pretty cogent take on Yellen’s utterances. It seems that after $3.5 trillion of balance sheet expansion, the US economy has not yet achieved the performance metrics — especially in the labor market — that was exhibited during the last central bank fueled expansion cycle of 2002-2007:

“Consensus is that she will likely highlight that the alternative measures of labour market slack in evaluating the ongoing significant under-utilisation of labour resources (eg, duration of employment, quit rate in JOLTS data) have yet to normalise relative to 2002-2007 levels.”

Now that is downright insulting! The phony prosperity that the Fed unleashed through the Greenspan housing and credit bubble was the exact cause of the 2008 financial crisis and recessionary spiral which followed hard-upon it. So why in the world would the Fed want to push its money printing campaign to the edges of sanity in order to replicate its last disaster?

Yellen has no clue that the US economy has stalled out because it has reached a condition of peak debt saturation.

The answer is not hard to find. Yellen has no clue that the US economy has stalled out because it has reached a condition of peak debt saturation. Indeed, the 2002-2007 benchmark now being proffered by Yellen was actually fueled by the final blow-off phase of a 30-year national leveraged buyout.

Between 2002-2007 credit market debt outstanding — public and private — soared by the incredible sum of $21 trillion while nominal GDP grew by only $3.5 trillion. And that was the end of the road in terms of the Fed’s patented formula of cheap debt fueled expansion of domestic consumption and nominal GDP.

Ever since the crisis, in fact, the Fed has been pushing massively on the credit string, but nearly the entire flow of liquidity has never left the canyons of Wall Street. Instead, it is parked in the excess reserve accounts at the New York Fed, having cycled through the money markets and pinned the cost of carry-trade gambling at zero percent.

So the casino is having yet another bullish moment because it expects the new monetary sheriff to keep the gamblers in poker chips for another go-round.

Ed. Note: No one knows for sure how long this money party is going too last. But when it comes to an end, you’ll want to be prepared. Sign up for the FREE Daily Reckoning email edition, and you’ll get access to an entire research library that details everything from how to “beat the Street” to the 5 best ways to invest in gold. In addition, you’ll receive at least 3 chances to discover real, actionable profit opportunities in every single issue of The Daily Reckoning. Don’t miss another issue. Click here to learn how you can sign up for FREE, right now.