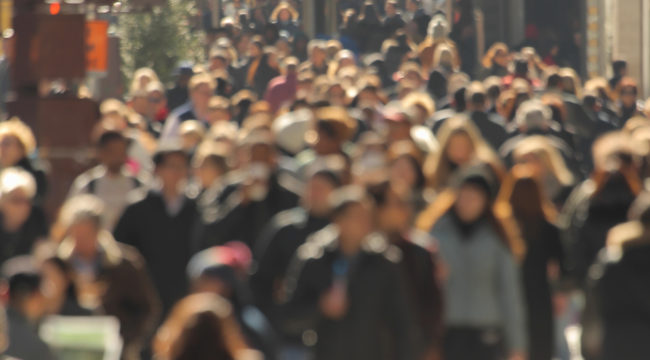 The Wisdom — Then the Folly — of Crowds

Stay away from the herd.

Always graze against the grain. Avoid spots where the crowd is thick.

Here is the contrarian’s creed… the market maverick’s manifesto.

Most of the time, the crowd drifts safely with the prevailing currents.

It is only at the extremes that the folly of the crowd is exposed.

The question implies the answer — drunk on stocks.

Sitting on cash like a brooding hen — and swearing off stocks forever and ever.

Wrong at the extreme, that is. As that same crowd was wrong at the bullish extreme in 2007.

Stocks have since scaled a Mount Everest of worry… thumbed a nose at every roaring bear… and once again traded at record heights.

So… is the crowd now swinging back to the euphoric extreme?

Bank of America Merrill Lynch (BofA) runs something it calls the “Sell Side Indicator.”

In the depth of bear markets, the patient shivers with fear.

It is the “vice versa” that steals our attention today…

The S&P hasn’t suffered a 5% or greater correction in more than 460 days. Over 330 days have lapsed since its last 3% decline.

Meantime, MarketWatch reports that September saw some of the quietest trading in history.

And the S&P 500 has closed with a move of 1% or more only eight times this year.

At the going rate, that would be the fewest since 1995, according to LPL Financial.

You see where this tale is running, of course…

BofA’s “Sell Side Indicator” is at its second-highest level in six years. 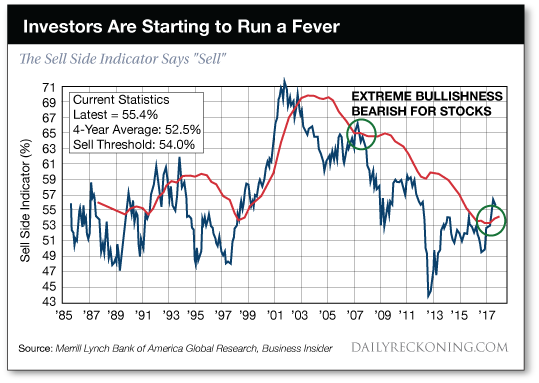 Cold fear has faded… and warm optimism settles in.

When this BofA thermometer is one standard deviation above its four-year average, the S&P 500 declines almost half the time, according to analyst Joe Ciolli via Business Insider.

It is now nearly two standard deviations above its four-year average.

And he says, “The U.S. stock market today looks a lot like it did at the peak before all 13 previous price collapses.”

In the meantime, promises of the tax cuts, infrastructure and mass deregulation that fueled the Trump “reflation trade” are nothing but gossip among the Baltimore orioles outside our window.

Here we paint a scene of impending doom.

Is it time to sell?

The answer is obvious.

Obvious… but quite possibly wrong.

Stocks may be in a bubble.

But we reported yesterday that some of the market’s largest gains occur in the bubble’s terminal phase:

But the Nasdaq spiked 200% over the previous 18 months as the craze reached fever heat.

We furthermore noted that the Dow has risen 24% since Election Day.

If the bubble has entered its terminal phase, the past suggests it may expand miles and miles before Judgment Day.

Yes, this is the second-longest bull market in history.

“But it’s still a long way from achieving top status,” according to Bob Carlson, editor of Retirement Watch.

Could the bull run another 3½ years?

And could the S&P double again before coming to grief?

Your guess is as good as ours.

After all, we’ve been expecting the end for these last eight years.