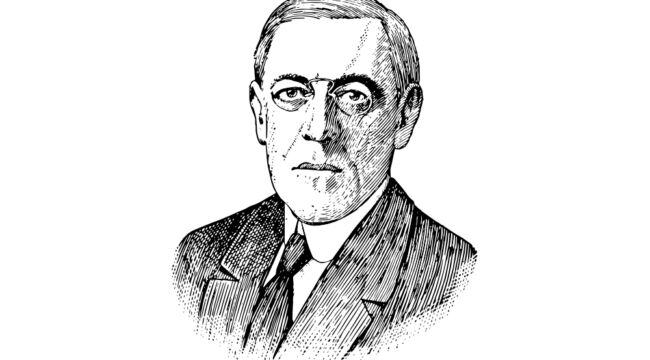 If the fools do not exceed the traitors by a count of 1,000-1 we would collapse immediately upon the floor.

All evidence we have compiled indicates the ratio of fools to traitors very far exceeds even the 1,000-1 figure we cited. It may indeed approach 1,000,000-1.

Being a fool is no crime, of course. We would be rotting behind the bars if it were. Much of the population would be with us — as would our very jailors.

Fools nonetheless present dangers. And the damages they work often defy calculation. A fool is a fool, it is true. Yet a fool with a bad idea in his head is a child with a loaded pistol in his hand…

In 1917, after three years of relative neutrality, Woodrow Wilson ordered the doughboys into the trenches. Was Woodrow Wilson a traitor for meddling in Europe’s civil war? We would never suggest it.

He may have meant the best in the world. He may have authentically wished to make the world safe for democracy — and by extension safe for America (as well as the large American banks, who had extended the Allies substantial loans).

That is, he may have believed the angels were with him.

But was he a fool for hurling the nation into a European civil war? Almost certainly. The warring parties had nearly bled themselves white by 1917. Neither side could shatter the other.

But Mr. Wilson dispatched the boys “over there” in 1917. This dispatching shifted the battle tide against the kaiser. And the allies “won” the war.

The German nation did not consider itself defeated on the field of battle. And why would it?

Reality was this: Germany believed it was signing up for “peace without victory” when it signed at Versailles in November, 1919. It did not believe it was signing for defeat.

Thus they yelled for harshest punishments against Germany.

These punishments and the German resentments trailing behind them paved the way for Herr Hitler — with all that followed.

Mr. Wilson’s shade remains in favor among today’s overseas interventionists. His ghost has been observed recently in Ukraine, wagging an index finger against isolationism.

American anti-interventionists are aware of his ethereal presence. They have countered with a wagging finger of their own, directed towards Mr. Wilson.

It is not an index finger — but the middle digit. But to proceed…

WWI was coined “The Great War” until an even greater war broke loose 20 years later. This greater war you know as WWII.

We must return then to Versailles. Was Woodrow Wilson and his famous 14 Points responsible for the Second World War?

Here our former colleague David Stockman hauls Wilson into history’s dock. Does David exhibit clemency? No. David instead indicts Wilson for every crime on the calendar:

We do not propose the 20th century would have remained dull absent Mr. Wilson’s botchwork. The world was — as it always is — to its neck with fools. And these fools would have certainly gotten themselves up to mischief somehow or other.

Yet we believe the hottest hells of the 20th century may have been averted had Mr. Wilson simply sat upon his hands in April 1917 — and kept the boys home.

But it was not treason that sent Mr. Wilson stumbling into Europe’s war… and the world subsequently into the 20th century’s hells.

But we suspect even God’s providence has its limits…