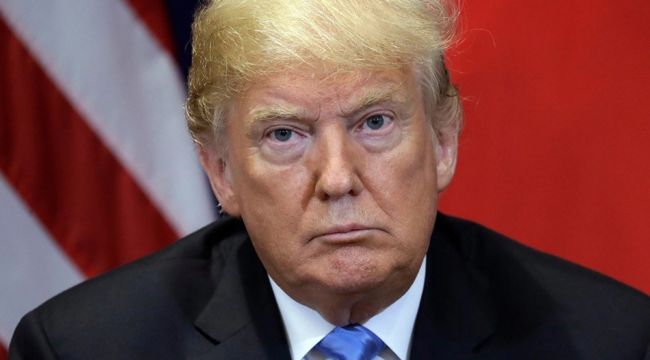 But Trump says it stops with the next fellow in line. Let it be the next president’s toothache.

It revealed an approaching “hockey stick”-pattern spike in the national debt — but only after a possible second Trump term had concluded.

Came the president’s response, according to our well-placed spies:

And what a déluge is on tap apres Trump — if not pendant Trump!

The United States is to its neck with red ink as is — some $21.8 trillion worth of federal debt alone.

The liquid rises by the day, by the hour, by the minute… drop by crimson drop.

Another good flooding rain or two and the entire head may go under.

As it stands today, the nation’s debt-to-GDP ratio crests above a perilous 106%.

That is, America produces more debt than it produces goods and services.

Evidence suggests — though it is inconclusive — that the flood zone begins at a 90% debt-to-GDP ratio.

Meantime, Trump’s economic meteorologists promised this year’s tax cuts would “pay for themselves” through higher growth.

Overall federal spending has increased 7% this fiscal year. But tax revenues have increased only 1%.

And this year’s $895 billion budget deficit is 39% greater than last year’s.

Is this tax cuts “paying for themselves”?

Please, put us down for tax cuts. But put us down doubly for spending cuts to match them.

There is the way to fiscal solvency — if anyone will take it.

But of course… we do not seek elected office. Nor would we be elected upon this austere and uncaring platform.

Yet the Congressional Budget Office (CBO) estimates the deficit will top $1 trillion in 2019 — one year ahead of schedule.

That deficit will very likely exceed $1 trillion in 2020… and remain above $1 trillion for the next decade.

Perhaps the flood is closer than the president would prefer…

Short-term cycles last some seven or eight years on average… and track with general cycles of boom and bust.

But of these super-cycles Dalio says:

“There are limits to spending growth financed by a combination of debt and money,” adding:

When these limits are reached, it marks the end of the upward phase of the long-term debt cycle.

The last super-cycle began shortly after World War II — which ended in 1945.

Thus we are hard against the 75-year upper limit of the present super-cycle.

“Debt super-cycles always end with a big bang,” he informs us.

And the longer the cycle… the louder the bang.

A former British diplomat with the unimprovable name of Alastair Crooke says Trump may soon need a rowboat:

It is Trump’s misfortune that his presidency seems to be coinciding with the end to not just “any” super-cycle, but to a turbocharged, global debt super-cycle, fueled by radical interest rate suppression and massive credit creation (which may explain its “longevity”).

But Trump is not just unfortunate, says Crooke — but “doubly unfortunate.” How?

Because at the same time — for related reasons — the U.S. simply is running out of fiscal “space.” The Treasury has a big (trillion-plus) borrowing requirement in this and coming years, and foreigners are no longer buying U.S. debt.

For the first time in 70 years, the [world’s] reserve currency holder is finding it hard to finance itself — and in the current atmosphere of Washington polarization — the U.S. cannot reform itself, either. It is stuck.

Of course, we find no great fault with the sitting United States president.

The fellow inherited an Everest of debt far beyond one’s man ability to tackle, even if he tried.

The task would swamp an Andrew Jackson, the last — and only — president to fully retire the national debt while heaving up a balanced budget.

Old Hickory would be under the presidential desk within an hour on the job, sinking a bottle of Tennessee’s hardest whiskey.

So here we stand in late-stage American democracy.

And the American president must keep the business going — there is, after all, an election in 2020.

And cutting spending is no way to win votes.

Only one question remains:

When comes the deluge?