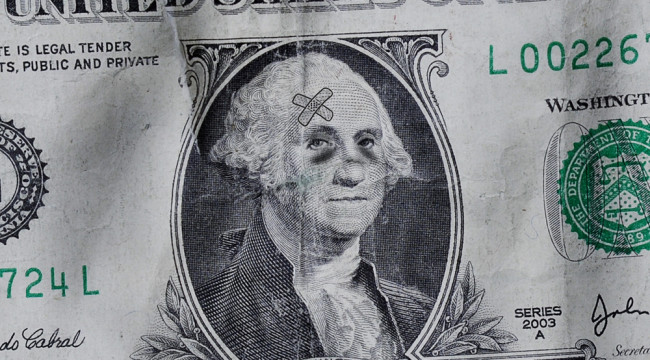 POITOU – It doesn’t look as though investors will get much Christmas cheer in their stockings this year.

Last Wednesday, the Fed raised interest rates – as expected – by a token amount…

At first, there was a little rally in stocks. But in the two trading days since, the Dow lost 621 points.

Trading will be thin this week, as the big day approaches and more and more people turn from Mr. Scrooge investors into Mr. Fezziwig revelers.

But this morning, the Japanese stock market sold off – a bad start to what could be a bad day… a bad week… and a bad year.

Investors looking at what happened on Thursday and Friday might think they see a trend.

They might decide to spend the holidays “safe and sound” – on the sidelines.

We would run our “Crash Alert” flag up the pole. But the old flag is in tatters. We felt sorry for it and put it into retirement.

Each time we thought a panic might occur, we hauled it out and sent it up. Each time, it hung there… fluttering in the breeze… warning investors. And each time, there was no crash to give meaning to its life.

Faded… tired… shredded on the edges, the poor flag is out of service – and maybe just when we need it most!

Whether the top is in or not… we don’t know. But it’s bound to come sometime. And if not now, when?

So much of what happens in the world is an absolute mystery – including the magic of holiday season – that we hesitate twice before making any forecast at all, much less a market forecast.

But investors are probably best off believing that the top is in… even if it turns out to be wrong. There can’t be much life left in a bull market this old… this expensive… and at this late stage in the credit cycle.

If the Fed could control the stock market, there would be nothing for investors to worry about.

But it can’t. It can fiddle with the price of credit. But it has no way of making people borrow.

All it can do is use heavy-handed gestures – such as ZIRP and QE – to try to influence the markets and “fix” problems. These policies create distortions, which invariably lead to more problems.

The big problem now is that there are too many people in too many situations that depend on more of the Fed’s EZ money.

The Fed says it wants to bring interest rates more in line with “normal” levels. But it has created a very abnormal world – where trillions of dollars of assets – stocks, bonds, real estate – need abnormally low interest rates to survive.

The Fed says it will raise short-term rates gradually, giving the economy time to strengthen and adapt. But dinosaurs couldn’t adapt to the Ice Age. And “ZIRP Age” investments are not likely to survive the frost of higher rates.

It wouldn’t be totally out of character for investors to look ahead… see the storm clouds forming on the horizon… and decide to get out of stocks while the gettin’ is still good.

Then, the Fed backtracks.

The global policy graveyard is littered with central bankers who raised interest rates too soon, only to retreat after tipping their economies back into recession or after having misjudged the powerful deflationary forces in the post-Lehman world.

The European Central Bank raised rates twice in 2011, before the economy had achieved “escape velocity” and just as the Club Med states embarked on drastic fiscal austerity. The result was the near-collapse of monetary union.

Sweden, Denmark, Korea, Canada, Australia, New Zealand, Israel, and Chile, among others, were all forced to reverse course, and some have since swung into negative territory to compensate for the damage.

At the Diary, we don’t think the Fed has raised rates too soon. We think it has raised them far too late.

Too many bad decisions were made based on ultra-low interest rates. Now, we wait to see what will happen next.