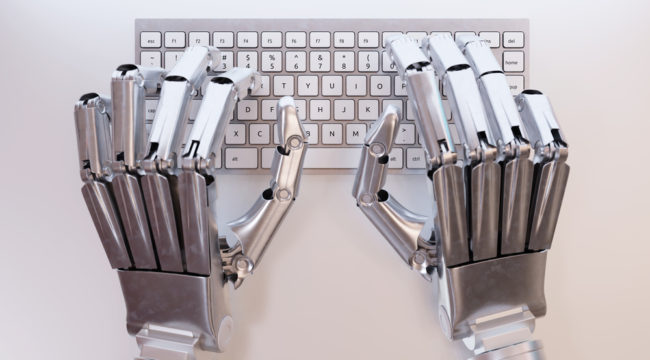 “If the machines decide to sell, who is left to buy?”

The renowned Doug Kass, president of Seabreeze Partners, would like an answer.

So would many others… your editor included.

“The machines” are computers running complex trading algorithms — pre-programmed software that lets computers “think” and trade for themselves.

And they now control a third of all trading on U.S. stock exchanges.

But for good or ill?

A computer is remarkably smarter than homo sapiens.

But a computer is remarkably dumber than homo sapiens.

It’s an idiot savant, all brains, no sense — Rain Man in silicon and wire.

It can add two and two.

But it can’t put two and two together…

IBM’s supercomputer, Watson, squared off against two top Jeopardy! players some years back.

It licked them both.

But when given the clue “It’s what grasshoppers eat,” Watson’s response told volumes:

The late polymath Leo Cherne on the paradox:

If crunching numbers, we’ll take the computer’s two out of three over man’s one out of three.

But not when the time calls for judgment…

But brilliant, stupid computers turned a down day on Wall Street into Black Monday.

As computers came in, human judgment went out.

Human judgment stayed out until the Dow lost 22% of its value in a single day.

A computer caught a whiff of “fake news” about the British pound sterling.

So it got it in its head to sell the pound that day.

Apparently, it was a rogue algorithm that triggered the sell-off… These days, some algos trade on the back of news sites… so a deluge of negative Brexit headlines could have led to an algo taking that as a major sell signal for the pound… Once the pound started moving lower, more technical algos could have followed suit, compounding the short, sharp, selling pressure.

Bill Black is a former federal regulator who investigated the savings and loans (S&L) crisis of the ’80s and ’90s.

And he thinks these brilliant but stupid computers could cause “a series of cascade failures”— as followed Lehman’s collapse in 2008:

“If enough of these bad things occur at the same time, financial institutions can begin to fail, even very large ones.”

But as far as this fellow is concerned, it’s not a question of whether this will happen but when.

Jim Rickards is no stranger to the contagion effects of financial crisis.

Jim was general counsel at Long Term Capital Management, which was the epicenter of the 1997 currency crisis that nearly bankrupted Wall Street banks.

Jim says a computer-amplified sell-off could cause “a market decline of 20% or more in a single day, comparable to the stock market crash of October 1987 or the crash of 1929.”

Jim brings the science of complexity to bear upon markets. And he says to expect more of these types of crashes… including the big one:

This kind of sudden, unexpected crash that seems to emerge from nowhere is entirely consistent with the predictions of complexity theory. Increasing market scale correlates with exponentially larger market collapses…

What if the damn fool computers go out of their minds and the Dow plummets 5,000 points before someone can pull the plug?

Recall that man is slow, inaccurate and brilliant while the fool computer is fast, accurate and stupid.

But how brilliant is man if he puts stupid computers in charge of his money?

What’s worse after all… to be a fool… or to follow a fool?