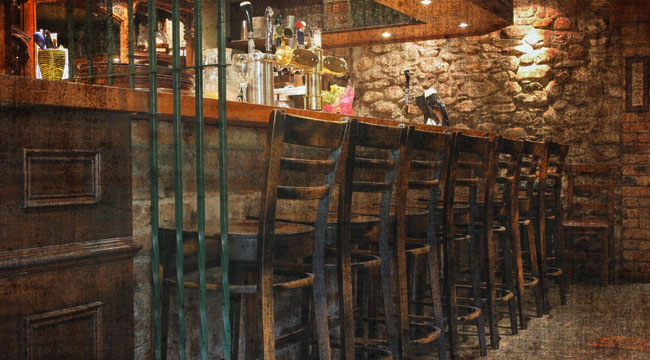 Why You Shouldn't Read About Paul Krugman While Drinking

Have you ever been at a bar or some other public place and had to overhear some goober talking nonsense that wasn’t just offensive, but also aggressively stupid? We’ve all been there: listening to some idiot spout off on something that we know to be patently, embarrassingly wrong. We’ve all fought the urge to shut such idiots up with sudden, naked violence (because such violence would clearly be wrong).

I found myself in just such a situation as I wrote at my neighborhood bar recently.

I had been talking to a co-worker, Kerry Lutz, on his show just a few hours before about how the Internet is making people smarter about the inherent problems caused by the state. Then I went to a local bar to get Internet access (because the Internet at my new place won’t be turned on till tomorrow) and had to overhear some asshat talking to his date about social justice, the evils of Wal-Mart (how paying less for stuff actually hurts people), and how Jon Stewart is so smart.

The guy was a bit of an ogre. Well over 6 feet tall with a deep, stentorian voice, the kind that is impossible to ignore if you’re within a 10-foot radius, even if he’s trying to keep it down. With his Daily Show views, height, and powerful voice, I suspect a future in politics for him.

It’s not polite to saunter up to complete strangers and intrude on their conversation to tell them how uninformed their opinions are. But if I were rude enough, I would have pointed out to this guy and his date that all the problems he’s so eager to fix with gun-backed regulation and redistribution are, in fact, caused in the first place by the state’s monopoly on the definition and supply of money, which it can then inflate, thus transferring wealth to the government and the well connected and away from the middle class and those further down the chain, who are forced to borrow more and more to keep their standard of living from falling.

Further, I would have pointed out that the answer to the ills of the downtrodden isn’t more political threatening, prodding, and pushing. Political violence is the source of the wealth gap in the first place. But that would have been challenging some very basic assumptions about the role of the state as the legitimate, armed regulator in human life.

It would also have challenged the assumption that the state ought to be the controller of the currency, and then would have required that more dots be connected in a short conversation than most brainwashed slaves are able to deal with.

The early after-work crowd started pouring in, and the noise of their conversation started drowning out Mr. Social Justice. I was just calming down when Jeff Berwick, editor-in-chief of The Dollar Vigilante, sent me a link to an article on Paul Krugman from last year. You can read the entire article here.

Essentially, Krugman tries to explain why the Keynesian paradox of thrift is actually a valid theory and not some lamebrained excuse for inflation and government debt. Did you think that the paradox of thrift nonsense had been put to bed? Au contraire, dear rational reader… The Guardian’s Decca Aitkenhead writes:

“Crucially, Krugman continues, ‘What’s true for an individual is not true for society as a whole.’ The analogy between a household budget and a national economy is ‘seductive, because it’s very easy for people to relate to,’ and it makes some sense when we’re not in the grip of a macroeconomic crisis. ‘But when we are, then individually rational behavior adds up to a collectively disastrous result. It ends up that each individual trying to improve his or her position has the collective effect of making everybody worse off. And that’s the story of our times.'”

For those that don’t already know, Paul Krugman is an especially obnoxious itch to any mind dedicated to good economic theory. Like every Keynesian, Krugman is a shameless apologist for centralized, violent, political intervention in the economy.

Biggest “stimulus” ever didn’t work? Clearly, we just need even more “stimulus,” says Paul. Economies aren’t households. Saving is good only for individuals, not groups of individuals. And this is the state we’re talking about! It can borrow without consequence to misallocate money to things the market doesn’t want and magically come out richer later.

The article itself was written by the same sort of asshat whose interventionist, leftist claptrap I had to overhear at the bar. The author seems to have a bit of crush on Krugman, however. Which would be fine if the crush were based on Krugman’s woodchuck-like good looks or obviously clever little mind or subtle charm. I mean, I can see it: the beard… the beady little eyes… the teaching gig at a prestigious university. But instead, the author is crushing on him because she thinks he’s right.

Sadly, most of the brainwashed tax cows in the world would likely agree. More government, more regulation, more inflation, more government debt. It’s a wonder these people manage to dress themselves in the morning.

Luckily, the din of the bar had blocked out most of the nonsense I was hearing earlier, but that Krugman article had me even further infuriated. Reading anything from Krugman not only ruins my mood for days, but it also makes me feel like I am in the Soviet Union in 1976 listening to the finance czar talk about how great communism is despite the fact that you can barely find a pair of shoes in the country… at least not one for both the left and right feet.

Krugman gets to spout his nonsense only because it tickles the ears of leftists who want to believe that there is no social program the government can’t afford, no immorality attached to government intervention, theft, and redistribution. The right loves the man to the degree that he sees war as economically beneficial.

You can’t deny that the man is whip-smart. But he is popular because he champions Keynesian economic theory and thus confirms a pernicious, pro-state bias.

I suppose it is my fault, however, for having stayed in the USSA this long. I feel like those who stayed in the Soviet Union right up until 1991… except that most Soviets actually knew their system was terrible. They had two governmental “news” outlets, the main communist newspaper and the main Soviet newspaper, Pravda and Izvestia.

Those names meant “the Truth” and “the News,” respectively… and a popular Russian saying was, “V Pravde net izvestiy, v Izvestiyakh net pravdy” (“In the Truth there is no news, and in the News there is no truth”).

Here, the local slaves still think the propaganda and drivel on CNN and other mainstream programming is actually both the truth and real news!

It’s a good thing I was sitting in a bar and could drink only a government-approved intoxicating agent… even if it is the least effective and slowest of the various ways to make the world melt away. No wonder everyone here drinks so much!

“Professional forecasters are worse than trained monkeys at predicting markets”…

Gary Gibson is the managing editor for Whiskey and Gunpowder. He joins the Whiskey staff as a long-time fan and reader of both Whiskey and Gunpowder and the Daily Reckoning. A graduate of Fordham University, Gary now spends his days reading about and writing on limited government, sound money, personal responsibility and resource investing.