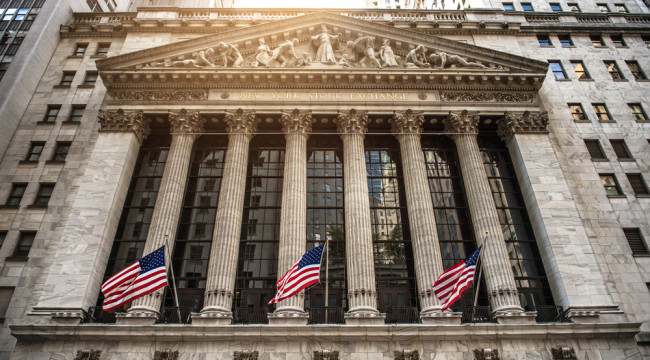 Why This Sucker Is Going Down... Again!

George Bush famously told an assembled group of Congressional leaders in the aftermath of the Lehman filing that unless they immediately passed an open-ended Wall Street bailout “this sucker is going down”.

They blindly complied. Yet for awhile it seemed of no avail.

By the post-crisis bottom in Q1 2009, household net worth had plunged from $68 trillion to $55 trillion or by nearly 20%. That reflected a 60% collapse in the stock averages and a 35% meltdown of housing prices.

For a fleeting moment it appeared that economic truth had come home to roost. Namely, that permanent gains in wealth and living standards cannot be achieved by the kind of rampant speculation and debt-fueled financialization that had generated the phony boom of the Greenspan era.

But that didn’t reckon with the greatest and most unfortunate accident of modern financial history. The White House advisors who counseled George Bush in September 2008 to violate the free market in order to save it had long ago proved their cluelessness about economic matters. They had advised him to appoint Ben Bernanke to the Fed in 2002, and then to promote him to the post of Chairman of the Council of Economic Advisors in 2005 and finally to become head of the Fed in January 2006.

But here’s the thing. Bernanke was an academic hybrid of the two worst economic influences of the 20th century——the out and out statism of John Maynard Keynes and the backdoor statism of Milton Freidman’s central bank based monetarism.

Both of these grand theoreticians got the causes of the Great Depression wrong, and Bernanke did doubly so. You can reduce all of his vaunted expertise about the 1930s to a single proposition.

To wit, the Fed should have bought up the entire $17 billion of government bonds outstanding at the time in order to liquefy the banking system and thereby arrest the plunge in economic output.

I have refuted that hoary tale in detail in The Great Deformation. The short of it is that the banking system collapsed because it was insolvent after the 15-year, debt-fueled boom of World War I and the Roaring Twenties, not because it was parched for liquidity or because the Fed had been too stingy in the provision of reserves.

In fact, money market interest rates barely exceeded 1% during the 1930-1932 period when Friedman and Bernanke claim the Fed was too tight; and excess (i.e. idle) reserves in the banking system soared by 15X.

There is no evidence that any solvent bank that was a member of the Federal Reserve System was denied discount loans or that solvent main street business that wanted more credit couldn’t get it.

Instead, what happened was that the reckless expansion of bank credit during the years prior to the 1929 crash was liquidated because it couldn’t be serviced or repaid.

Total loans outstanding had grown from $15 billion to $40 billion during the proceeding decade and one-half, but much of it had gone into margin loans on Wall Street, real estate speculation and massive over-investment in US export and capital goods industries that collapsed once Wall Street financing of foreign customers dried up after the crash.

So the money supply measured as M1 shrunk by about 30% during the three years after the crash because bad loans were being liquidated and bank deposits extinguished. There was no disappearance of that Keynesian ether called “aggregate demand”. Rather, it was that the phony wealth of the prior credit boom which inexorably evaporated.

Needless to say, the events in the fall of 2008 had nothing to do with what actually occurred after the 1929 crash. Back then the US was the world’s powerhouse exporter and creditor, but like in China today the apparent prosperity of the times depended upon vendor finance.

That is, with the help of the Federal Reserve, the US banking system and bond market had advanced the equivalent of $2 trillion in today’s economic scale to foreign customers of US farmers and manufacturers.

When the stock market bubble collapsed in October 1929, however, the Wall Street market in foreign debt went stone cold, triggering a cascade of worldwide defaults. By early 1933, the booming foreign debt market of the 1920s had become the subprime mortgage market of its day—-with debt prices sinking to less than ten cents on the dollar.

In short order, Warren Buffett’s famous metaphor about naked swimmers being exposed when the tide goes out was well demonstrated; it transpired that US export customers had been borrowing new money in order to pay interest on their accumulating debts, but without access to new credits they had no option but to drastically curtail new orders.

Accordingly, US exports collapsed by 80% during the three years after the 1929 peak, leaving US industry stranded in excess capacity and overloaded with working inventories of raw materials, intermediate goods and finished products.

The latter, for example, dropped from $40 billion to $18 billion and capital spending dropped by 75% during 1930-1933. Likewise, with the collapse of the stock market and the easy credit boom, sales of durable goods like autos, washing machines and radios dropped by upwards of 70%.

In short, the Great Depression was not an avoidable mistake of the Fed during 1930-1933 as Bernanke falsely claimed when he xeroxed Milton Friedman’s erroneous history of the 1930s; it was the economic consequence of the unsustainable 1916-1929 credit and financial bubble that had been fostered by the Fed.

So Bernanke had it upside-down as a historical matter, and way out in left field as a contemporary policy matter. That is, as he ran around Washington in the fall of 2008 yelling that Great Depression 2.0 was at hand he was preaching groundless hysteria.

The fact is, at the time of the housing and mortgage bust the US economy did not resemble that of 1929 in the slightest; and there was not even a remote risk of the kind of industrial depression that had occurred in the early 1930s.

That’s because after 20 years of Greenspan-Bernanke money printing, and its replication by China and the rest of the EM export mercantilist central banks, the US economy had been essentially de-industrialized. There was no risk whatsoever that the kind of capital spending reduction and inventory liquidation that had occurred in the early 1930s would be replicated.

Indeed, for a short period of time the brunt of the industrial production adjustment occurred in China and the EM. In effect, China and its supply chain had become the exporter/creditors of the present era.

Thus, the post-crash Hoovervilles this time around were in the Chinese interior as 100 million migrant workers streamed home after suddenly being thrown out of work when world trade collapsed in the fall/winter of 2008-2009.

By the same token, spending by US households after the 2008 crisis was bolstered by a surge of automatic income transfer payments for unemployment insurance, food stamps, Medicaid/Medicare and other safety net programs; and by employment in the vast domestic service sector that as an inherent structural matter does not shutdown to liquidate inventories because it has none.

During a spending recession service businesses shrink incrementally, not radically. Pilates instructors book less hours but their studios do not go dark like overstocked factories.

Needless to say, the global debtor, massive importer, service-based de-industrialized welfare state that the US had become by September 2008 was the polar opposite of the 1930s economy that Bernanke so badly misunderstood in the first place. And for that reason, a classic industrial depression was never in the cards.

In fact, as I also demonstrated in The Great Deformation, the moderate liquidation of the excess inventories and payrolls that had built-up during the Fed’s unsustainable housing and credit boom was over and done by mid-2009. Indeed, the recession had cured itself even before the $800 billion Obama stimulus program or the Fed’s massive QE maneuver had any measurable impact on the US economy.

So Bernanke lunatic money printing spree which took the Fed’s balance sheet from $900 billion on the eve of the crisis to $4.5 trillion did not prevent any semblance whatsoever of a Great Depression 2.0.

What it did, instead, was inflate the mother of all financial bubbles. Not only was the phony household wealth that had been destroyed by the last crisis entirely recovered, but it has been increased by another $18 trillion to boot. 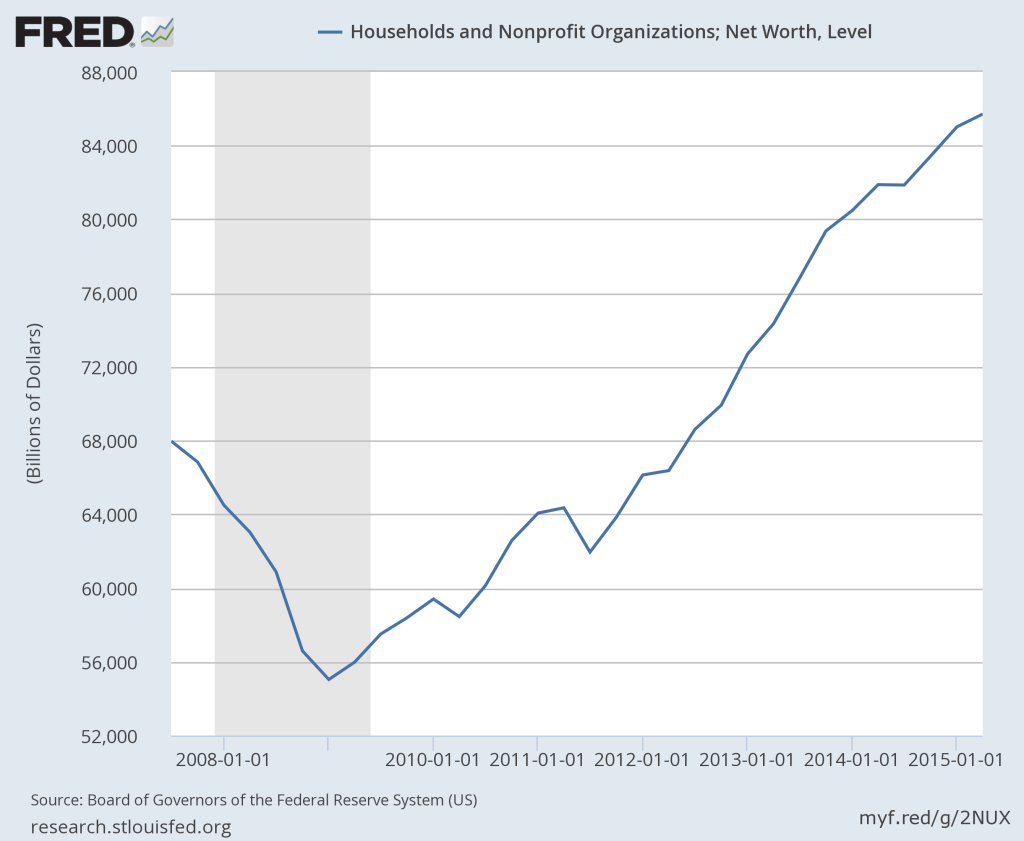 Needless to say, the above chart is the product of massive asset price inflation, not increases in the ingredients of real societal wealth. That is, gains in labor hours employed, productivity gains realized and entrepreneurial energies unleashed.

In the case of labor hour growth, for example, there has been none.

Between the Q3 2007 pre-crisis peak and the most recent quarter,household wealth as measured by the Fed soared by $18 trillion or 24%, but labor hours have risen less than one-half of one percent.

There is obviously no way to quantify entrepreneurial activity per se. Indeed, the various facets of it—- creative destruction, business innovation and disruptive technological change—-are crucial to capitalist prosperity precisely because they can’t be quantified in recurring statistical series from the government’s data mills.

Nevertheless, Gallup has long tracked the birth, death and net change in US business firms, and that trend is unequivocal. It had been heading south for many years, but took a step-change downward after the financial crisis; and it still has not recovered. 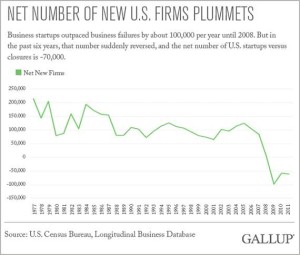 Finally, it’s just a plain fact of history that without gains in real net investment there can be no gain in real wealth. Yet real net investment in the US business economy today is 8% lower than at the 2007 peak and 17% below turn of the century levels. 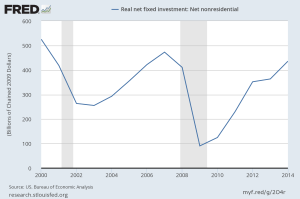 So how do you grow household wealth by $18 trillion in the face of these dismal real world trends?

In a word, with a printing press. But what happened today is that Draghi showed he is out of tricks and Yellen confessed she is out of excuses.

Yes, this sucker is going down. And this time all the misguided economics professors turned central bankers in the world will be powerless to reverse the plunge.