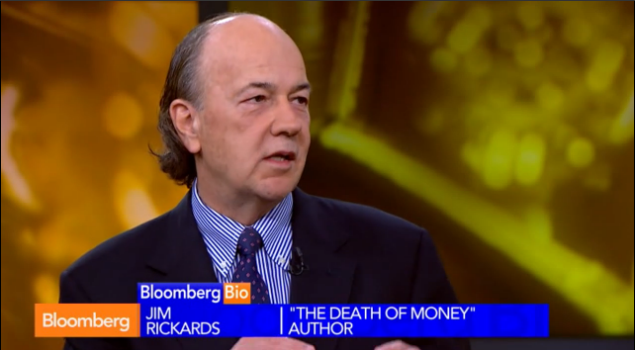 Why the Fed Will Continue to Print Money in 2015

Editor’s. Note: On Oct. 6, 2014, Jim Rickards was interviewed by Bloomberg TV for his thoughts on gold, currency manipulation and the overall strength of the global economy. You can watch the entire interview by clicking on the video, or read the transcript below…

Bloomberg TV: I wonder, Jim, how you… First your reaction to that statement that the economy is stable… at least relatively. Are you encouraged by, for example, the jobs numbers that we saw last week?

Jim Rickards: No, not at all. Look… Labor force participation is going down. What Janet Yellen is looking at is real wages. Forget about the unemployment rate, that’s almost an artifact at this point because labor force participation is declining. She’s concerned about inflation. She wants to have easy money, to create jobs until she’s right about inflation. What is she looking at? She’s looking at real wages. When real wages go up that means people can get a raise. When people start to get a raise that’s when inflation alarms start to go up.

Real wages are flat to down. They’re actually down, lately. So she’s not concerned at all. She’s got so much slack because of the labor force participation. Real wages are going nowhere. She has no inflation concerns at all. That means… I don’t see them raising rates in 2015.

Bloomberg TV: Is the real wages number a demographic issue? I mean, do you see people who get paid more retiring and moving out, while people who are starting at a lower wage coming into the labor force?

Jim Rickards: Well, there could be a lot of causes behind it. Some of them are demographic, some of them are structural. That’s one of the debates. Is it demographic or is it structural? The answer is it’s a little bit of both. But the important thing is regardless of the cause, [real wages] are on her dashboard, that’s what she’s looking at. So, that continues to be weak. You know, we’ve got 50 million Americans on food stamps… 26 million Americans unemployed or underemployed… 11 million on disability which is kind of a new form of unemployment in some cases and that’s going up. Our fundamental economy is very weak… for structural reasons.

Yellen is trying to address a structural problem with a liquidity solution. It doesn’t work, it won’t work, that’s why the Fed forecasts have been wrong by orders of magnitude for five years in a row.

Interestingly Madame Lagarde the other day, because the IMF meeting is coming up… The IMF forecast has been wrong five years in a row also — they lowered their forecasts. She was actually candid about it, she said “you know, this is getting a little boring we’re wrong every year.” But that’s because we’re in a depression not a cyclical recovery.

Bloomberg TV: You know we had several guests on Bloomberg Surveillance this morning, though, saying that we were actually returning to Alan Greenspan’s Oasis of Prosperity here in the U.S. And the big theme at those big IMF/World Bank meetings will actually be this divergence. The U.S. economy nearing escape velocity while the rest of the world slows down.

And since Jim says we’re in a Depression, I’m going to say he disagrees with that…

Jim Rickards: Here’s the thing… First of all the rest of the world is slowing down. Japan fell off a cliff in the second quarter, China is slowing down — that’s actually contributing to these demonstrations [in Hong Kong].

Bloomberg TV: And look at the numbers out of Germany overnight!

Jim Rickards: So, it’s obvious the world is slowing down. But the idea that U.S. is going to pull the world up?

Now, what’s been happening lately is we have this strong dollar… That, by the way is why… See gold hasn’t changed much in real value in 5,000 years. When people say gold’s up or gold’s down — if the dollar is your numeraire then yeah, the dollar price of gold is up or down. But the way I think about it, gold’s the constant, so when I see a low dollar price of gold, what I say is the dollar’s strong, and that’s exactly [the way I think of it]. What’s happening to gold is no different than what’s happening to the euro, the yen and all the other currencies. So what we have is a strong dollar right now.

But the U.S. is bearing the entire cost of global structural adjustment. We can’t afford it. We threw Japan and Europe a lifeline through the strong dollar, but we’re going have to pull the lifeline back in and use it ourselves.

Bloomberg TV: The United States and Germany, though, are the only two developed countries that have actually reduced, since the financial crisis, their level of debt — total debt-to-GDP.

There’s also the fact that manufacturing… What about the great American revival of manufacturing? We’ve seen companies, even Lenovo, moving back to the U.S. to manufacture here, because the labor market here is becoming more competitive.

Jim Rickards: Sure, a couple things, though first… Everyone in Washington is high-fiving because we cut the deficit in half in the last couple of years. It went from 1.4 trillion to $700 billion, that’s true.

Bloomberg TV: I would be most concerned about household debt, though… If I were looking at… You know, you want to see how the people are doing in the country…

Jim Rickards: Well, the only reason the economy got a little bit of lift in the second quarter was partly because people were willing to take on a little bit more debt. But they seem to be kind of moving the other way lately. So that’s not sustainable.

Bloomberg TV: Alright, so… The price of gold, you’re saying, is stable, it’s the dollar that moves… I mean… How does gold look, then, when you value it in terms of euros or in terms of yen?

Jim Rickards: Well actually in euros it’s been performing better because the euro itself is going down. But, you know, just kind of taking the dollar price of gold as our benchmark…

Here’s how the world is set up…

The taper’s going to end either this month or next month. Everyone expects the Fed to raise interest rates in 2015. The big debate is will it be March, will it be July… That’s nonsense. They can’t possibly raise rates because the economy’s weak. Janet Yellen is not seeing anything on her dashboard that tells her to raise rates.

I expect it may actually come to QE4 in the middle of 2015. Remember…

Bloomberg TV: So we’ll continue to grow the balance sheet. Because this is the one thing I think about…

Jim Rickards: Right… But they’re going to have to keep printing… they have no other way.

But the reason is, they’re using a liquidity solution to a structural problem. It won’t work, but they think it works, so they’re going to keep trying. That’s the bottom line.

And remember, everything changes January first. We have the most hawkish FOMC you can imagine. There have been vacancies on the Board of Governors, so you’re overweight presidents and you got two “super-hawks” Fisher and Plosser.

January 1st the President has filled the vacancies. You got Brainerd and Sam Fisher who are doves. Let’s see, one more vacancy probably get another dove, and then two more presidents coming on, Evans and Kocherlakota are doves.

And Janet Yellen, you know, it took her a while to get her feet on the ground… Remember she didn’t start the taper, Bernanke did. He tied her hands. And you know, she’s the new kid on the block — you’re not going to blow up policy in your first meeting.

But by January, the governors are going to be at full strength, the presidents are going to be dovish, Yellen’s gonna have her feet on the ground, and her dashboard is still not blinking red… So they’ll, at best, not raise rates, and probably go to QE4.

Bloomberg TV: So you’re saying no rate raise for all of 2015.

Jim Rickards: Not in my lifetime unless they make structural changes.

Seriously we’re in a depression… You can’t solve a depression by printing money. You can only solve it with structural changes. Look at the Great Depression…

At the beginning of WWII, we completely restructured the economy. I’m not rooting for war, I’m just saying that’s the kind of drastic structural…

And what does it mean today… fiscal policy, keystone pipeline, Obamacare, regulation, break up the banks…

These are the things that will get the economy moving, not printing money.

Bloomberg TV: Just finally… Gold, obviously you’re saying it trades inversely to the dollar, but it also trades in other things such as central banks buying, retail demand… at these levels it wouldn’t be surprising to see some of, in particular, the Asian retail customers coming back to the market…

Central banks manipulate, even some would say…

Why isn’t that activity moving the price of gold?

Jim Rickards: Well, because you’ve got two things going on at once. You’ve got the physical market and the paper market. Now the prices are not wildly different or else you’d be in arbitrage.

But look at the physical demand in China coming out of the Shanghai Gold Exchange. I talk to people in Hong Kong and the Chinese are bringing gold in through central Asia using People’s Liberation Army assets — armored cars, basically off the books… mining output, Hong Kong inputs…

China has acquired 3-4 thousand tons in the last five years. That’s almost 10% of all the official gold in the world. These are enormous acquisitions.

Here’s the thing… People say, “Oh… It goes from the GLD warehouse in London to a… safe warehouse in Shanghai… What difference does it make? The total supply of gold is unchanged.”

Bloomberg TV: Alright, Jim Rickards, author of The Death of Money… Also not a proponent of Bitcoin… Right? We’ve talked about this…