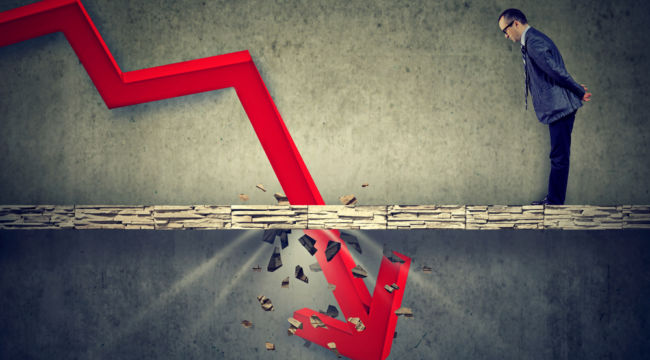 Why Markets Plunged So Fast

The market swung from record heights to “correction” within a mere six days.

Only once in history has it plunged so violently so swiftly. In 1928 that was — not long before the great gale of ’29 blew on through.

The market has since endured 25 “swift” corrections over 75 years.

These are not extended, orderly retreats. They are rather lightning hysterias packing ferocious wallop.

On average — the phrase is necessary — you can therefore expect one of these frantic corrections every three years.

Yet four of these 25 hair-raisers have shaken Wall Street since August 2015.

That is greater than once per year — again, if you take the average.

(We doff our cap to macroeconomic analyst “The Heisenberg” for supplying the data.)

We must conclude the market is increasingly vulnerable to these sudden and violent shakings.

But why? Why the greater frequency since 2015?

Today we seek to drive a light through the puzzle… and penetrate the mystery.

But first, how did battered markets open the fresh week?

Greater volatility, that is, was likely on tap this week.

But like a careening drunk who grabs something sturdy on the way down… the stock market steadied itself today.

Steadied itself? It went bounding up the nearest tree…

The Return of the “Dip Buyers”

Thus the “dip buyers” peeked out from their bunkers today… and concluded it was safe to come out.

“The sell-off was so fierce last week that you do have some buy-the-dip investors emerging.”

We suppose the immediate prospects of rate cuts put some heart into them.

Markets presently give 100% odds of a March rate cut. And not a 25-basis point rate cut… but a thumping 50-basis points.

And an April rate cut? Those odds exceed 70%.

But returning to our central question… why are corrections growing more violent?

We believe “passive investing” holds the answer — or much of the answer.

As we have written before…

After the 2008 near-collapse, the water management team at the Federal Reserve inundated markets with oceans of liquidity.

The biblical-level flooding knocked down existing financial signposts. And “fundamentals” no longer seemed to matter.

The tide was rising — and all boats with it.

Some 90% of all actively managed stock funds have underperformed their index during the last 10 years.

“Passively” managed funds — on the other hand — make no effort to pinpoint winners.

They instead track an overall index or asset category, not the individual components.

This strategy has yielded handsome dividends this past decade of generally rising waters. Tim Decker, president and CEO of ISI Financial Group, explains:

Passive management came into its own during the long bull market that started in late 2009, after the market had collapsed amid the financial crisis in 2007–08. Money had been flowing from active to passive vehicles in the preceding years, and investors — disillusioned by their losses in the crisis and the high fees they had paid — started turning to passive vehicles even more. That trend has continued to this day.

Passive investing has increased from 15% of funds in 2007 to perhaps half today.

As long as the tides continue rising….all is peace.

But here is the risk:

When the tide recedes… that same handful of stocks can wash the market instantly out to sea.

For when they move, the market goes with them.

Panic selling begets panic selling. And none knows how far the waters might drop.

All Heading for the Exits at Once

Or as analysts Lance Roberts and Michael Lebowitz of Real Inves‌tment Advice have it:

Importantly, as prices decline it will trigger margin calls, which will induce more indiscriminate selling… As investors are forced to dump positions… the lack of buyers will form a vacuum causing rapid price declines [that] leave investors helpless on the sidelines watching years of capital appreciation vanish in moments.

“Fast, Furious and Without Remorse”

These fellows remind us that investors hemorrhaged 29% of their capital over a three-week span in 2008 — and 44% over three months.

Last week’s selling was fast… furious… and without remorse.

Microsoft plunged over 20% at one point last week, for example — as did Apple. Thus they were dragged into bear market regions, however briefly… defined as a 20% drop from their recent heights.

And given their overall tug on markets… last week witnessed a thumping correction.

Why Should They Stop Now?

Again, only in 1928 did stocks plunge from record heights into correction in merely six days.

We do not know which direction the markets will take next. And we will hazard no prediction — as we have limited appetite for crow.

We will only say that deceased felines have been known to bounce.

But to our notion, passive investing at least partly explains these intensifying market spasms.

And we expect more of them.

Our concern is that the market may fall into spasm one day… and fail to come out.