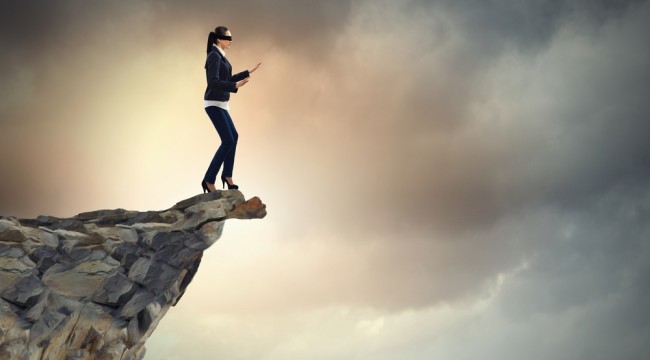 When the market fails to confirm your thesis, it’s time to step aside. You always hear traders say that they never “marry” a stock. That’s because once you fall into the story, you tend to lose perspective. You seek out only opinions that confirm your thinking, tossing all other analysis out the window.

Inevitably, this behavior leads to ruin.

Even if you aren’t a trader, there’s still merit in adopting this maxim. It doesn’t mean you have to drop all of the conviction from your investment strategy. Just know that it’s impossible to tame the market. If you try to fight it at key turning points, there’s a good chance you’ll get burned.

In December 2012, there was a new record in gold holdings by popular exchange-traded funds. The spot price hovered around $1,700. The 12-year golden bull appeared alive and well.

That’s where the trouble started.

At this point, gold had become too tradable with the invention of ETFs. They offered investors exposure to the physical metal. With ETFs, momentum traders could easily gain exposure to physical gold and hop right off if they didn’t like the ride anymore.

One of the market’s inconvenient truths is that one wave of selling can inspire countless other investors to run and hide. The same herd mentality that pushes prices skyward can also send them crashing down. That’s true of anything you trade on an open market — even gold.

With that in mind, early last February, I made the following observation in The Rude Awakening as speculators exited gold:

“And if stocks have any say in the matter, it isn’t coming back anytime soon.

“I love my charts. But I don’t need a picture to show you what’s going on here…

“By now, you know the trends. In the 1990s, gold was stagnant while stocks enjoyed an extended bull run. As stocks started to fall out of favor in the early 2000s, gold’s massive rally began.

“Right now, another shift is brewing. The tide is turning in favor of equities.” 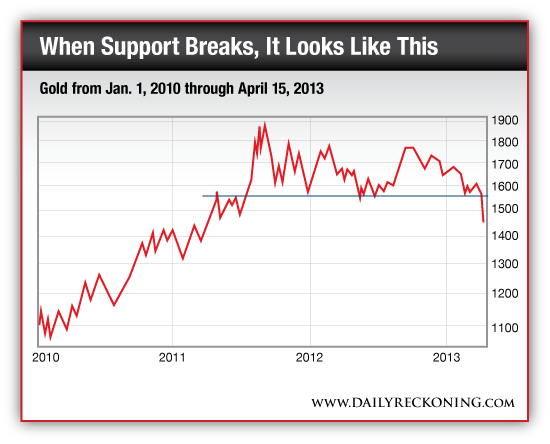 “$1,550,” we wrote that day, “was enthusiastically bought every time gold dipped since its 2011 top. When this critical support area broke, it was lights out. Sellers are now in control. You must accept the fact that gold has entered a bear market.” 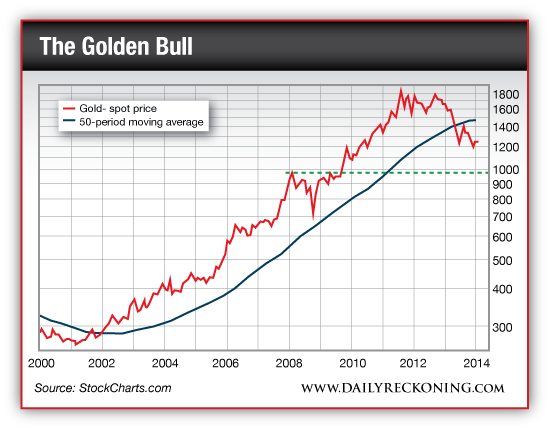 I added the long-term moving average to this chart to give you a smooth look at gold’s big, secular trend. Once price fell below this mark for the first time in 11 years, it became apparent that the massive uptrend was in trouble.

Now, you might be thinking this is a chance to buck the herd and be a contrarian and think, Gold’s dropping… people are selling… I should buy.

But it’s important to remember that the herd is usually wrong — at market turning points. Following the herd for the meat of a big move like the surge in stocks in the 1980s and 1990s or gold’s roaring bull market in the 2000s was the correct move. But knowing when to jump on board (and when to head for the hills) is the tricky part.

That’s where technical analysis comes in handy. By analyzing price charts and projecting trend lines, you have the chance to spot major market turning points before the average investor catches on.

If you set aside your emotions and follow the trends, you have a shot at buying into a big move while most investors are still selling — or selling out of a winning position while the herd sits and waits for a comeback that might never arrive. Let’s use gold’s 20-year chart as a breakdown… 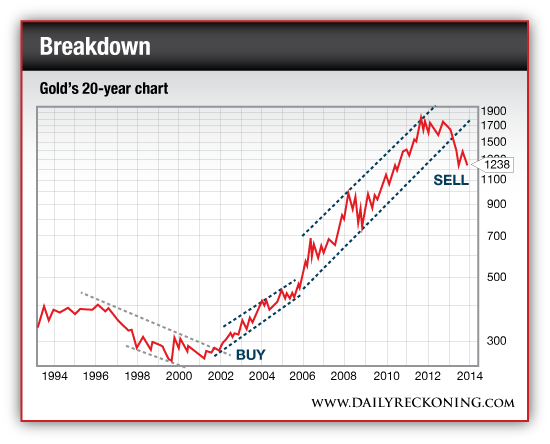 Take the late 1990s, for example. Gold was still locked in a downtrend — a series of lower highs and lower lows formed a downward trend channel. Instead of buying right away, you could’ve followed the trends and waited until the downtrend was broken. That would’ve been early 2002, when gold broke out toward $300.

That marked a perfect opportunity for an aggressive buy. And even if you’re a more conservative investor, you could have waited for a rising channel to form before making a buy. That would have postponed your purchase until mid-2003, when gold finally posted a meaningful higher low near $330.

After you figured out your entry, there wasn’t much more to do. Gold’s bull market played out beautifully. The early stages (before most folks thought twice about gold) from 2002-06 gave you a tight rising channel. As gold started gaining popularity as an outperforming investment in 2006, you witnessed increased volatility, a much wider channel and even bigger gains.

Until it broke below its trend channel, my analysis gave gold the benefit of the doubt on the upside. It wasn’t until the big break that began setting up last winter that it appeared that the decade-long secular bull was finished.

This is a perfect example of not trying to call a top — but to take what the market gives you. I wasn’t super bearish gold at $1,800. It was still possible that the action we were seeing was noise or consolidation — or just a potential test of support (a necessity of a healthy bull run). It wasn’t until just below $1,600 that I shifted my thinking firmly to the bear case.

If you still doubt gold’s trajectory… take a long-term look at the Dow/gold ratio. That is, the Dow Jones industrial average priced in gold. 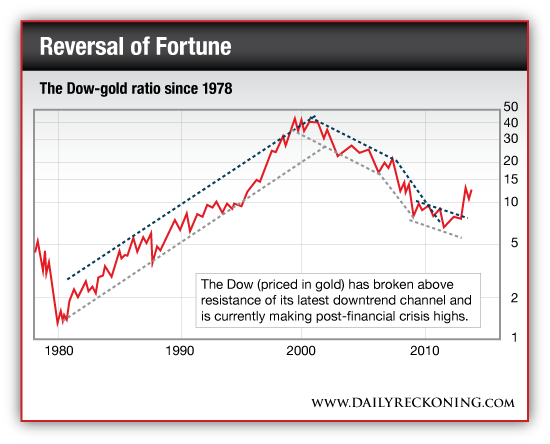 In reality, the Dow-gold ratio bottomed a little below 6-to-1 in late 2011. At writing, it’s back above 13-to-1. Clearly, the market didn’t give a hoot about what anyone thought was reasonable. It’s pretty obvious what happened when the Dow finally broke higher after years of decline versus gold.

It signaled the massive performance shift we wrote about in February. After more than a decade in the driver’s seat, gold is giving up ground to stocks.

If you’re still squeamish, ask yourself: Is your desire to buy gold based on reasonable analysis of market conditions? Or is it simply an emotional reaction to the sell-off?

If you’re a long-term-oriented investor, we suggest giving gold a chance to consolidate or move lower. After all, what’s the rush? When was the last time you saw any asset class permanently recovered from a violent drop the very next day? It just doesn’t work that way…

There will be snapback rallies and more downside. Expect to wait a long, long time before a suitable base forms. The gold market experienced a great boom. Naturally, people flocked to it. Investors, traders, hedge funds and your crazy co-worker bought gold. People wanted to own it because of its performance. Now they’ve already left or are leaving. I don’t think they’ll be rushing back to buy anytime soon.

Treat gold as a safe haven if you’re going to buy now. If you jump into a gold position this year expecting explosive gains, you’ll find nothing but disappointment…

If you are well versed in trading, you could always try to play a snapback move in gold futures or miners instead. Gold will be off for a while… but miners potentially offer you a more powerful trading opportunity. You could gain some exposure through an ETF like Market Vectors Gold Miners ETF (NYSE:GDX).

If that’s your game, feel free to investigate it. We recommend keeping tight stops and expecting the unexpected.

P.S. I’ve been telling my Rude Awakening readers about this for months now. Today I was able to share my views with Daily Reckoning, including a unique opportunity to gain exclusive access to my most in-depth market research. If you’re not getting The Daily Reckoning email edition, you’re missing out on the full story, including daily chances to learn about real, actionable profit opportunities. Don’t miss another issue. Sign up for FREE, right here.