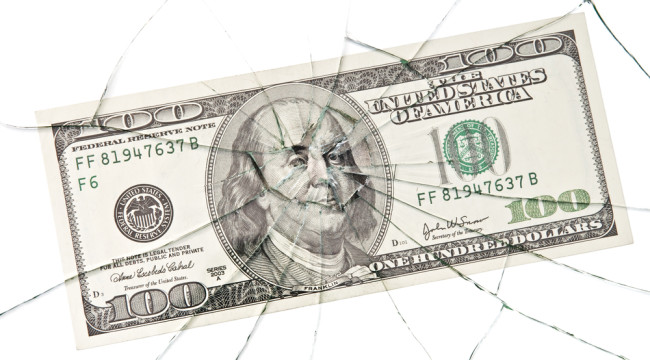 Why Even a Modest Disruption Will Shatter the Status Quo

Consider this clipping from the August 1932 San Francisco Chronicle newspaper:

“Reduction of salaries of municipal employees and limitation of city positions to only one member of a household will be sought by (Supervisor) Adolph Uhl in two amendments to the San Francisco charter. The salary reductions would run from 2.5% for the lowest bracket to 25% on salaries of $500 a month or more.”

Imagine the tempest of fury and outrage that would arise should this be proposed the next time local governments run short of funding. Nowadays, the calls would not be for sacrifices from the highly paid public servants but for tax increases of 25% to maintain public-servant wages and benefits while the private sector economy implodes.

This unwillingness to sacrifice for the greater good is now endemic. This is the result of two powerful social forces:

The dominance of maximizing private gain by whatever means are availableleaves the Status Quo brittle and fragile. Since everyone reckons any sacrifice should fall on someone else, the only possible result is disunity and bitter conflict over modest sacrifices that are too inconsequential to save the system from collapse.

Wishful thinking, mindless optimism and blind adherence to failed ideas also make the Status Quo brittle and fragile. As Michael Grant noted in his book The Fall of the Roman Empire:

The wishful thinking is that we can borrow limitless sums ad leave the debt burden on our children and grandchildren with no consequences. But once the system is dependent on massive borrowing, it becomes acutely sensitive to default, as consumption collapses once consumers can no longer borrow to consume, and asset bubbles engorged by debt-assets (bonds, student loans, mortgages, subprime auto loans, etc.) burst.

Lest you think this implosion from a modest decline in debt and new borrowing is preposterous, please examine this chart of total credit: that tiny wobble in 2008 very nearly collapsed the entire global financial system. 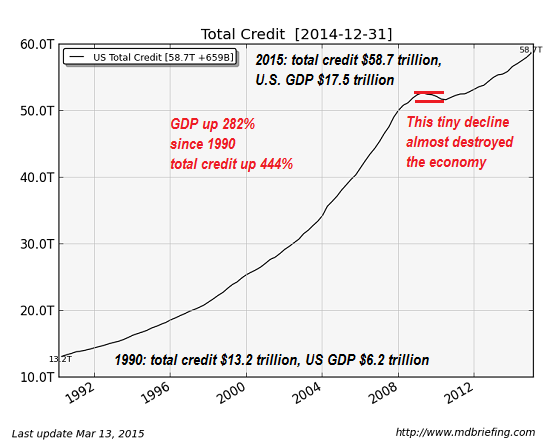 Any modest reduction in debt, tax revenues, consumption or new borrowing will bring the entire Status Quo crashing down. This is the bitter fruit of rampant financialization and the ascendancy of maximizing private gain by whatever means are available.